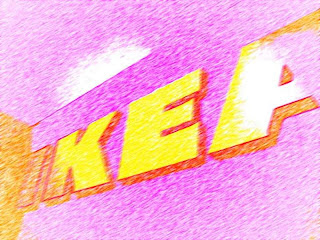 Boy and Girl date for two years while living out of hotels, casinos, internationally located short-term rentals and her L.A. apartment.

Boy and Girl enjoy this a lot.

Boy kinda sorta moves into Girl's apartment while still remaining non-committal in regards to the location of his so-called "permanent" dwelling because he's a dark, restless soul that cannot be pinned down.

Boy's household needs consist of one clear plastic set of drawers in which to store the boxer shorts and a tray that makes ice cubes small enough to fit into the bong.

Girl's household needs, given roommate's departure and newfound urges to... let's not use the word "redecorate"... spruce up certain areas of the apartment, contribute to a much longer list.

Boy really just wants to be left alone. He just wants a room with a door that closes so he can listen to his hippie music and write.

Girl would rather he do that in an attractive-looking environment.

Boy and Girl get high and go to IKEA.

While Girl looks at all the cute shelving units with names like "Billy" and "Expedit" and loves that they come in that ebonized black-brown wood color, Boy looks at a living room set and imagines Theo Jorgensen and Stig Top Rasmussen, reclining on their IKEA couches while they play online pot-limit Omaha during a depressing Scandinavian winter.

Boy finds all his shit in 15 minutes.

Girl continues to take in the Swedish superstore at a more leisurely crawl, casually testing out armchairs and ogling new dining sets.

Curtains require intense scrutiny, as they frame the entire room.

Girl looks through racks of fabric. Boy wanders away.

Boy ends up in pillow section and personally tries out every single model out of sheer boredom and growing desperation.

Girl discovers that all the curtains she liked online look like crap in real life. Girl makes another pass through curtain section to see if there is anything she missed.

Girl begins to wonder if boy has hung himself from ceiling with the "Felicia" drape.

Girl decides to give up on curtains and go shopping on her own later because she knows wherever Boy is, his patience has surely left him by now.

Girl finds boy in pillow section . Tone in Boy's voice has evolved from "I'm humoring you" to "I want to get the fuck out of this fucking Swedish hellhole right now."

Boy rants about corporations and consumerism and Stuff White People Like on the ride home.

Girl humors him because she doesn't really care and she got all the stuff she wanted.

That sounds disturbing. Like Pauly owns a week's worth of drawers that he is constantly cleaning.

Maybe you should create an uber-teaming-domestication blog with the Bracelets http://oddcoupling.blogspot.com/

Are you going to make him go through this again in Vegas?

(But I'm with you on the whole "attractive looking environment" thing. This is why I do not go to the Brooklyn abode of the Train that is sometimes F, sometimes G.)

Biggest advantage of having the 13 yo daughter is wife has shopping partner.

You just described my horror day in the Ikea in Belfast with my beloved.

The scars are still raw...

Boy is met with understanding from ~52% of global population.
The end.