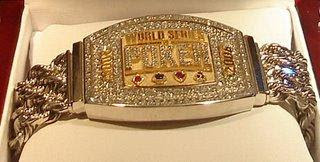 Rumors have been circulating around the poker world for months now that Harrah's Caesar's Entertainment was working with ESPN on a plan to suspend play in the 2008 World Series of Poker Main Event once the final nine players were reached and take a months-long break before a new world champion was crowned, allowing for a "near-live" broadcast of the final table. After plenty of whispers, speculation, exclamations of "holy shit, they can't do THAT" and this elegant pro-delay editorial from B.J. Nemeth, news leaked tonight that Yes, Virginia-- the final table of this year's Main Event will play out for the cameras 117 days after the last card is dealt at the Rio.

Here's the USA Today piece that leaked out tonight, confirming the deal.
Posted by change100 at 10:21 PM

i think this is a smart play for poker. all the unknowns who make it will get a chance at sponsorships and media coverage before it goes down.

everyone likes to root for the home team and an underdog.

while it may be a smart move for poker, wouldnt it be funny if Jimmy Douchenstein had 98% of the chips and Sammy Kornfeld was the extreme shortstack and had to wait months to shove blind.