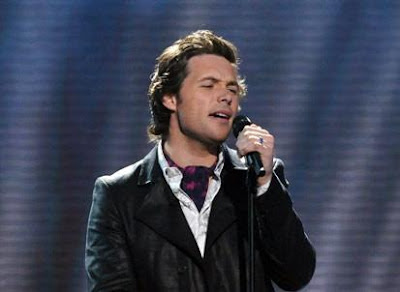 Tonight, the tiny lady with the huuuuuge titties played mentor to the Idols... none other than the queen of country, Miss Dolly Parton! Now, you might think I'd be cringing in horror at the thought of a bunch of twangy, banjo-laden songs. And I kind of was. But lest we forget, Dolly is a helluva pop songwriter and some of these kids managed to break out and put their own stamp on her material. All 9 remaining contestants had to perform in only one hour of airtime, so let's get cracking!

Brooke White “Jolene” A fiddle player, a background singer, and another dude playing some redneck instrument surrounded Brooke onstage tonight. Perched up on a stool with her guitar in her lap I thought, hey, maybe this is what it might be like to see one of her shows... that's kind of a cool vibe. Vibes aside, this was maybe a "B" effort from her. She stuck close to the original arrangement, maybe throwing in some slightly thicker strumming and percussion and the result was definitely in her wheelhouse. However, the emotion and the connection to the lyrics that she usually displays just wasn't there this time. Compared to some of her previous work on the show, it wasn't a standout effort, but I don’t see her in any danger this week. 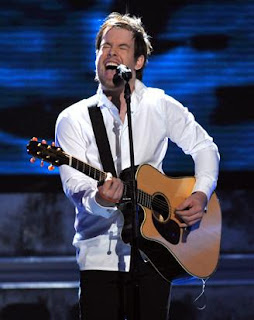 David Cook “Little Sparrow" “You, over the last few weeks, have taken some risks and they’ve paid off-- how have you chosen the arrangements?” asked Seacrest in his little pre-performance mini-interview with Cook about about the song arrangements he has been choosing. Cook acknowledged that he pores through iTunes for inspiration and cited Doxology, Neil Zaza, Whitesnake, and Chris Cornell for their versions that he's used. He then quickly followed that bit of face-saving with the announcement that he was doing his OWN arrangement of Parton’s song tonight. Well, I'm glad we cleared that all up and can go back to choosing a new manufactured pop star. Phew! This wasn't my favorite thing from him, but he pulled off a cool version of a song that is nowhere near his genre and made it work. I also dug his new haircut. It's no longer plastered against the side of his face and is instead more spiky and vertical. I think Simon said it the best-- "Well, if you can make a song about a sparrow work, more power to you."

Ramiele Malubay "Do I Ever Cross Your Mind" Dude, she is so done this week. The song didn’t suit her at all. The country lilt and bounce to the melody absolutely nothing to show off her voice and her delivery was all but emotionless. It looked like she didn't know the music well and she was just trying to get through her minute forty-five. Sorry, kid it's just not good enough. Time to go home and get a cruise ship job! 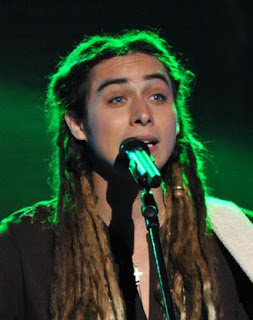 Jason Castro “Travelin’ Through” Everyone’s favorite dreadlocked Jack Johnson wannabe actually kind of engaged me this week! It was emotional! It looked like he was trying! And it was definitely his best effort since "Halleluljah." Jason will finish outside of the Top 5, that's almost a given, but it was nice to see him give a good effort in one of the remaining shots he has at performing in front of 30 million people.

David Archuleta "Smokey Mountain Memories" Oh, look. It’s Archuleta singing another ballad. With another patterned sweater under a trendy blazer. And yeah, his voice sounds like totally perfect. If you dig the Adult Contemporary vibe, you’re gonna buy this kid’s albums. If you’re a Clay Aiken fan, you’ll probably enjoy him as well. But he’s just, too goddamned precocious and coached for me. I’d listen to Ruben Studdard's Greatest Hits for 6 hours on repeat before buying an Archuleta disc. What do I know anyway. America loves him. Week after week he gets over 5x the votes of his closest competitor and he's a shoo-in to make the top two. Even on Bodog he's only slightly better than even money to win! Yawn. I guess it's 8 more weeks of the Wonder Child for me. 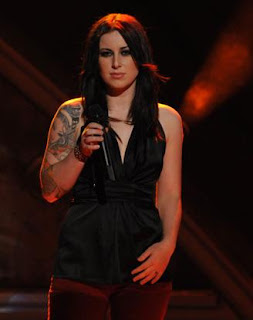 Carly Smithson “Here You Come Again” Smithson delivered graceful, pared-down version of the song with a near-perfect high E at the end. It wasn't spine-shiveringly amazing, but it was one of the better efforts of the night. But then Simon goes and insults her clothes and everyone boos him. But look, I think he was actually trying to help her. Cowell's not saying she’s ugly or out of shape or anything, he just made the point that she needs to polish up her onstage look a bit. And it’s true—the red corduroys and the sort of wrinkly satin top—I mean, she didn’t look like ass but it wasn’t doing her any favors. Glam it up a little, Carly but don't go ball gown on us or anything.

Kristy Lee Cook “The Coat of Many Colors” “Your mama is gonna be so proud of you!” squealed Dolly. Yeah, just like if you’d won Miss Oklahoma or whatever. Seriously, why the hell did she start the song seated at the foot of the stage? And what’s with the dangly earrings, the gown, and the junior prom hairstyle during an upbeat country tune? All the styling was totally wrong. The song suited her and she sounded recordable on it but again—unemotional, robotic, forgettable. But hey, 4 million albums later, that worked for Carrie Underwood I suppose. And right at the end Seacrest compliments her French pedicure—I mean, how fucking gay can you get? 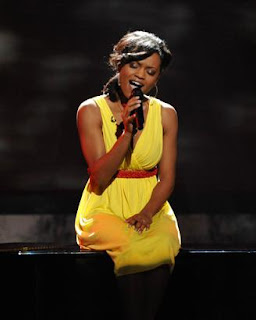 Syesha Mercado “I Will Always Love You” I called this song at dinner. This could be her moment if she can pull it off. But wait... whaaaat? Why is she sitting on the fucking piano?!?! I mean, if any move says "cabaret," that's it. Why would you ever sing this song from up there when it is so obviously a "stand there and sing" power ballad. I don't even know how you breathe properly for those end notes without staning. It just MAKES NO SENSE! OK... onto the performance. The front half wasn't bad, even though she lost the phrasing a little on the first chorus. The second half? I mean come on, you’re always gonna have the Whitney version in your head whenever you hear it and Syesha went for it anyway. And of course it totally paled to Whitney, who doesn't? I think this might have made a few more people notice Syesha, but it was really a blown opportunity for her to really turn out something memorable.


Michael Johns “It’s All Wrong but it’s All Right” I think this performance might be my favorite thing Johns has done on the show. It was also the first time I was able to watch him and not think of him as just a very good bar singer or a guy who could cover the lead in one of those Queen tribute shows. Seriously, my only problem with Johns tonight was that really ghey scarf he wore under what would have otherwise been a cool-looking shirt. Still, right song at the right time, done the right way. Well done, mate.

My prediction for the week: If Ramiele doesn't go home this week, I don't know what you people are smoking. But it's not as good as my stuff.

Current Bodog Odds on who will win: