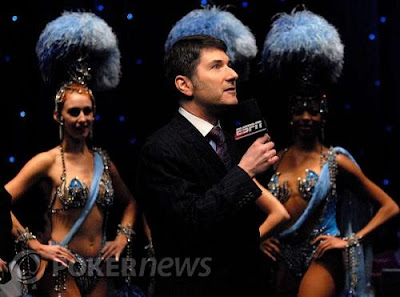 Jeffrey Pollack introduces the 2008 November Nine
Pauly crawled into bed around six this morning and nudged me awake. Ever since Joe Cada wrapped the Main Event bracelet around his wrist early Tuesday morning, there had been rumors that a big story was about to break in the poker world.

"Jeffrey Pollack is out."

Say what? Sure I was already horizontal and only semi-conscious, but you could have knocked me over with a feather.

The poker media lost a huge ally today in Pollack. Say what you want about exclusive media rights and all the hand-wringing and teeth-gnashing that came with it, but Pollack never censored independent voices in media row, most notably my beloved and the Tao of Poker, but also sites like Wicked Chops Poker-- not exactly the type of guys who will sugar-coat a story to satisfy a bunch of corporate suits. These guys write about the Hooker Bar, "Ass Girl" and the real, serious degen-ing that surrounds the world's most prestigious poker tournament. Pollack didn't simply allow these outlets to function, he embraced them.

Poker fashion has also lost one of its shining stars. Back in April, I named Pollack one of my Top 10 Poker Fashionistas in a piece on PokerNews. I don't know how he did it, but the man always looked fresh as a freakin' daisy, even after a 20-hour final table. Seriously, I've never seen him look bad. His pinstripe suits were always pressed, and he made bold style choices with his pastel shirts, colorful ties, and coordinating pocket squares. I even composed a haiku ode to the Commish over the November Nine weekend:

The WSOP will not be the same without Jeffrey Pollack. Who is going to tweet the "Song of the Day" next year, even if it is a rotating mix of U2, Coldplay and Steely Dan?

Fare thee well Commish. And best of luck. But as you well know now, in our game, it's not about luck.
Posted by change100 at 9:44 AM No comments:

"Baby/ I go crazy/ There's fever in the funk house now" -The Rolling Stones
The line to get in stretches for more than a hundred yards. People have been here since morning, waiting for their chance to witness history. They played cards, read best-sellers, and thumbed through dog-eared copies of Bluff as they waited. And waited. And waited.
Now, many of them have seats inside the Penn & Teller Theatre. Tournament Director Jack Effel is introducing the players. Jeffrey Pollack is looking sharp in one of his trademark pinstripe suits. Yellow-shirted Cada fans are continuing their two-day liquor fest as they cheer on their man. That Jack Link's Beef Jerky Sasquatch thing is wandering around. And I'm back up in the skybox with my media brethren, waiting to watch it all unfold.
Barry Greenstein predicted 28 hands. I said 66. And only a few hours from now, poker will have a new World Champion.
For hand-by-hand action and chip counts, head over to PokerNews. For all the behind the scenes flavor, hit up my beloved at the Tao of Poker where he'll be live blogging all the action.
You can also follow us on Twitter:
@change100
@taopauly
@_otis_
@benjodimeo
@alcanthang
@pokerati
@matthewparvis
@pokerprincess
Posted by change100 at 10:22 PM 1 comment:

At the start of yesterday's 17.5-hour odyssey that left us with our final two players in the WSOP Main Event (Joe Cada, the young luckbox and Darvin Moon, the old luckbox), I penned this fashion report for the Tao of Poker. I'm a fan of group costumes, so I was tickled to see that many November Nine fans arrived to cheer for their guys in custom-made shirts. Check it out.

Darvin Moon - Everyone's favorite Maryland logger chose a black polo, jeans, and his beloved New Orleans Saints hat for his final table outfit. No logos. No patches. Nada. Personally, I was hoping for him to play up his country-bumpkin image with a plaid shirt (totally hot this fall) and overalls, his supporters all carrying mini-chainsaws that they'd rev up each time their man won a pot. Instead, Moon's rural brethren are all sporting Wheeling Casino T-shirts that say "Bad Moon Rising" on the front. Eh. Points do go to those "Moonies" who brought heads-on-sticks, featuring their man's image.

James Akenhead - "The Limey" might very well be wearing the same clothes he played Day 8 in-- a black button-down shirt and a matching black Full Tilt hat. He has fans here but they are not in costume. FAIL.

Phil Ivey - Pauly tried to get Otis to bet on the color of Ivey's Full Tilt hat, offering him the field against baby blue. Otis wisely told my beloved to go fuck himself, knowing that's the biggest sucker bet he'd be offered all day. Indeed, Ivey chose his trademark sky-blue cap, pairing it with a black button-down. His superstar entourage, including Daniel Negreanu, Barry Greenstein, Jen Harman, and sorta-freakish but totally adorable superfans Mel & Pat Humphries all have prime spots onstage.

Kevin Schaffel - Schaffel is wearing the standard PokerStars sponsored player uniform of a black Stars shirt and matching hat, paired with smart tan trousers. He's not exactly lighting the fashion world on fire with that outfit, but at least he didn't take his ninth-place money and hit up Versace for some vertigo-inducing silk shirts. Schaffel's 80 supporters are all decked out in "Schaffel Up and Deal' shirts with a cartoonish rendition of their man on the front-- the weakest of the group fan costumes, IMO.

Steve Begleiter - Begs must be at least a little superstitious because he too is in the same clothes he wore when he made the November Nine back in July-- a navy polo and a red Full Tilt hat. ESPN's continuity peeps must be happy about that choice. His fans, however, get top marks from me for their blue "BEGS, BEGS BEGS!" shirts.

Joe Cada - While Cada is in his black PokerStars uniform, his fans went for neon with garish yellow sweatshirts that made my eyes bleed after looking at them for five minutes in the hallway. The pullovers say "Cada" on the back. Just like that, in quotes. Like it's his nickname. But it's his actual name. I'm confused.

Antoine Saout - As much as I'd have loved to see him in a beret, Saout is dressed in head-to-toe Everest swag. Snooze. His fans are packed into the stage left balcony, all wearing royal blue soccer jerseys that say "Saout" on the back (and "Everest Poker" on the front, of course). Their nationalistic pride is showing, as a number of French flags have been spotted in their section. Personally I'd have gone for baguettes-- they're easily visible on-camera and can double as snacks.

Jeff Shulman - I saw Happy sauntering down the hallway earlier in a maroon Phish T-shirt (points for that), which he has now unfortunately covered with a ratty navy CardPlayer hoodie (booooo). It doesn't look like he's been to the barber (or bought a razor) since play finished up last July. Dude...even Pauly cleaned up after Festival 8 and lost the tour beard. In the immortal words of the joker-- "Get your shit together, man!"
Posted by change100 at 5:29 PM 1 comment:

Offstage at the November Nine

One year ago I sat less than ten feet from the final table as Peter Eastgate took down the 2008 WSOP Main Event. This year I'm a hundred feet in the air, hunkered down in the press "skybox" with a PokerNews badge around my neck but without a specific assignment. Sure, my alter ego Nicole Gordon will be scribbling away on several feature articles for the front page of PNews, but unlike previous years, I won't be doing any final table play-by-play. Can't say I'll miss it too much, save for the excitement of being right in the thick of the action. It'll be nice to string more than a few sentences together and feel more like an actual writer than a hand-logging robot.
For live reporting from the floor, check out the PokerNews Live Reporting page, where F-Train, Don Peters, and Eric Ramsey will be covering the action.
If it's behind-the-scenes action, dirt, and all the stuff most other outlets can't print, get thee to the Tao of Poker. I'll be contributing a few fashion reports in my (copious amounts of) downtime and will also be on Twitter.
Posted by change100 at 11:49 AM No comments: