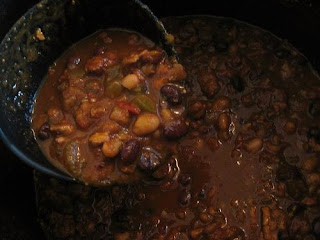 Several in the Twitterverse were curious about my turkey chili recipe. This is one of the few dishes I make that is both healthy and Pauly-friendly, though he complains about the size of the dice on my celery every time without fail.

For the curious and the rest of you, here's my ever-evolving concoction:

Coat the bottom of a large heavy pot with the olive oil and turn up the heat to med-high. Let the oil heat for a minute or so, then break up the ground turkey and add it to the pot. Season with 2 tsp salt, 2 tbsp chili powder, 1 tsp cumin and cayenne pepper to taste (I shake out about 1/4 tsp, but I like it spicy). When the turkey has browned and nearly cooked through, add in the onions, celery and green peppers. Stir it around and let the veggies soften, about 3-4 mins. Next, add in the tomatoes, cilantro, jalapeno pepper and garlic. Stir it around again and let it cook another 3 mins or so. Drain the juices out of the two cans of beans, then add both the black beans and the white beans to the pot along with the 4 cups of chicken stock. Stir that shit up.

Let the chili come to a boil, then turn the heat down low and let it simmer for about 90 minutes. When it's thick enough to your liking, remove from the heat and let it rest about 10 mins. Taste and adjust spice if necessary. Top with finely minced red onion, sour cream or cheese if you'd like.
Posted by change100 at 6:44 PM 15 comments: 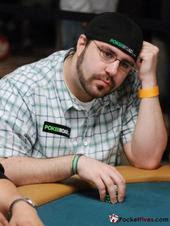 "When Patrik Antonius folds his cards, they turn into doves and fly away."

That's only one of the many "Shronkisms" that left me in stitches during the all-too-brief time I knew Justin Shronk. Without fail, every time I saw the guy, he'd make me laugh, make me smile, or even just play some random YouTube clip he'd come across that would brighten my day. This afternoon, I found myself in tears in Mar del Plata airport when I heard of his passing, and now, flying the red-eye home from Buenos Aires, I'm completely exhausted, but still can't sleep. I tear up every time I think of him and can’t imagine the devastation his family must feel right now.

I met Shronk at the Commerce Casino in early 2007. I was covering my first tournament for PokerNews, the L.A. Poker Classic, and had already heard a slew of hilarious Shronk stories from Pauly, who had just returned from working with Shronk at the Aussie Millions, where the now-infamous Vegemite Prop Bet had taken place. It was only last month that Shronk was up for “Best Actor in a Tao of Pauly Video” for that performance and he naturally launched an online campaign for himself, pimping for votes on the PokerRoad forums and getting his friends to stuff the virtual ballot box.

I got to know Shronk the most, though at the 2007 World Series of Poker when he was working as the Multimedia manager for PokerNews, shooting and editing video pieces and interviews. We discovered that we were both unabashed fans of writer Aaron Sorkin, who created both Sports Night and The West Wing. We’d constantly trade our favorite quotes from the show and one day I casually proposed a West Wing trivia contest.

Shronk was not the best traveler and unfortunately for him, our jobs involved a great deal of it. Shronk wanted his American food, his American television, and the comforts of his own apartment rather than living out of hotels and ordering foreign cuisine in a foreign language. While on an EPT stop in Barcelona, Spain, Shronk was introduced to the ways of European showers— cramped, tiny, and often doorless. I can’t tell the story nearly as well as our former editor John Caldwell can, but let’s just say that Shronk’s first shower in Barcelona ended with a phone call to housekeeping to bring twenty towels up to his room to sop up the quarter-inch of water that was now sloshing around his bathroom floor.

A few weeks after Barcelona, we were wrapping up the WSOP-Europe in London. By now the whole PokerNews crew had been on the road for the better part of a month. Poor Shronk had sprained his ankle on an uneven part of road and was hobbling around Leicester Square with all his gear. Apparently he couldn't find a laundromat close enough to hobble to because in desperate need for clean underwear, Shronk decided to send out all his skivvies to the hotel laundry. That month, PokerNews received an invoice from Shronk including his laundry bill which came to 400 GBP. Yup, $800 to wash Shronk's shorts. We never let him forget that one.

Shronk loved poker. He loved the game, the people who played it and most of all his band of fellow misfits who covered it. The great injustice of his premature exit from this world made me recall a scene he loved so much from that episode of The West Wing that he'd seen 60 times. President Bartlet's longtime secretary Mrs. Landingham had been killed by a drunk driver and he railed against God...in Latin... while standing alone in National Cathedral after her funeral.

I sit here in shock, trying to think what the hallways of the Amazon Room will be like this summer without his booming voice, hilarious one-liners, and a love of the game that inspired us all. My heart goes out to his family and close friends in what has to be an unbearable time. Rest in peace, buddy.
Posted by change100 at 11:11 AM 3 comments:

I'm off to Argentina this morning for another LAPT event (and this time I get to go with Pauly!). So while I'm fending off crying infants on a crowded airplane, take a look at this piece I wrote for Coventry over the weekend-- Part I of Change100's Guide to Music Festival Style.

For now, though, excerpts from the Evita soundtrack fill my ears as I prepare for the long journey to Buenos Aires...
Posted by change100 at 7:38 AM No comments: