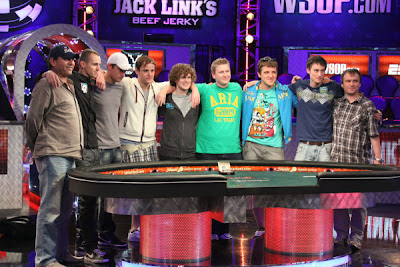 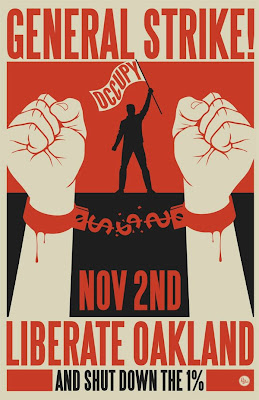 Stand in solidarity with Oakland today. Instead of watching another rerun of Keeping Up With Kim Kardashian's Divorces, take action against the banksters and corporate goons. Unless you're closing your account and moving it to a credit union, don't go to the bank. Don't hit up the ATM and eat another exorbitant transaction fee. Instead, use the powers of social media for good and spread the word. Tweet your followers. Put one of these cool posters on your Facebook wall. And if you're near a local #occupy movement, head down there and and see what its all about. Protesting isn't just for hippies and anarchists anymore, kids, despite how much the media tries to paint it that way.
If you're in the Bay Area, three rallies are scheduled for tomorrow at 9 AM, Noon, and 5 PM at 14th and Broadway in downtown Oakland as well as a 4 PM march from that location to the Port of Oakland.
For more info, hit up Tao of Fear and for ideas on how you can participate in the general strike visit Occupy Oakland.
Posted by change100 at 12:50 AM No comments: 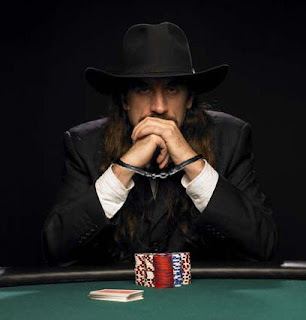 Thank you, Los Angeles. You've been a great audience. Don't forget to tip your waitresses.

It hasn't fully sunk in that I'm moving out of Los Angeles one week from today. On a practical level, I've certainly taken the necessary steps to prepare, spending the better part of my downtime since the end of the WSOP divesting myself of a sizable percentage of my physical possessions. 14 bags of corporately-produced clothing that I wore to slave for a corporation half a decade ago went to Goodwill. Three bankers boxes of books and DVDs are still sitting in the trunk of my car, waiting to be sold to a secondhand shop in Hollywood. Cabinets and drawers full of junk I forgot I owned have been sorted, catalogued, and (mostly) discarded. Most of my clothes are already inside a dresser in San Francisco and the winter coats and heavy sweaters I'll no doubt be donning in the upcoming weeks and months have been cleaned and pressed. I suppose it's the fact that I'm still hanging on to this apartment until the end of the year, the fact that it's still filled with furniture and appliances and art on the walls that separates me from the reality of moving. The 800 or so square feet I've called home for the last seven years will remain largely unchanged, albeit inhabited by a trusted caretaker. I'll make the 380-mile journey south come Thanksgiving to placate my parents' wishes to spend the holiday with both their daughters, and again for an unspecified amount of time around Christmas that has yet to be decided. It's a long, but necessary goodbye.

The move was met with mixed reactions from my family. My mother was sad, but ultimately understood, having moved clear across the country when she was 23 to a place she'd never been. Mandy was thrilled and can't wait to visit after her hellacious 10-week shoot in Las Vegas is complete. My father, as expected, was downright funereal in his tone and went on a negative offensive (It's cold up there! Public transportation is horrible! Everything is so expensive!). He's less dour now, but still unconvinced, and probably hoping that after the initial six months, will settle back down in Southern California, in and of itself, a highly improbable scenario. But he's my father and he loves me and I'm a lot more like him than I'd care to admit. So I get it.

Outside of my family, everyone who I was once close to in Los Angeles has moved on, or I see them so often outside of Los Angeles that our mutual home based has ceased to matter. My holy triumvirate of Showcase, Bean, and Ben are all on Eastern Daylight Time. My blogging brethren are scattered all over the world and the poker circuit limps on, although my role in that traveling circus is constantly being redefined. So there aren't too many goodbyes to be had. Los Angeles will always be my hometown, but home now is with Pauly, wherever life may take us.

I see a future without this couch and this table, without the zen blue of my bedroom walls and the dark woods of Pauly's office, without my grandmother's dining room table and the orange chair my father used to sprawl in as he studied for his law school exams more than forty years ago. It's also a future without the circular saw presently grinding away in the neighbor's yard, so there's that too. It'll be replaced by the rattling our bay windows make as the Muni whirs past and the wind through the giant ficus that stands guard outside our new home.

It's a future that is only a week away, and one I'd jump into tomorrow if I could. Anyone want to finish packing for me?
Posted by change100 at 11:59 AM 5 comments:

When the WSOP schedule was released I was confronted with a decision-- play the Ladies' Event or travel to upstate New York to attend a three-day Phish concert. If the Ladies' Event fell on any other weekend during the WSOP, there was about an 80% chance I would have played. Despite the score I had earlier this year, it still would not have been sound bankroll (or liferoll) management to buy in to any $1,000 event directly. Of course, there were other avenues available-- single-table satellites, selling action, and even at one point pre-Black Friday, sponsorship. The more I thought about it, however, the more it turned into hardly a decision at all. Of course I was going to choose to spend Fourth of July weekend seeing my favorite band with the love of my life over a poker tournament. And, as it turned out, I couldn't have picked a better weekend to leave Las Vegas and the World Series of Poker temporarily behind.
Stand too close to an impressionist painting and it is, in the inimitable words of Alicia Silverstone in Clueless, "A big ol' mess." Move back a few feet and shapes start to form. Make it a few yards and you'll begin to see the scene for what it really is. I had to get 2,500 miles away from the Rio to do just that.

We returned just in time to witness the final table of the $50,000 Players' Championship, where Phil Hellmuth is making his third run this summer at his record 12th WSOP bracelet. Although its a little strange NOT to be live-blogging the whole thing from start-to-finish, I can't say I miss it. At this point in my journey as a writer, I have a far better perspective standing further back from this particular painting. The same goes for the Main Event, which roars to a start tomorrow. My time is far more profitably spent these days grinding out rent money in the $1-2 and $2-5 NLHE at Venetian. No amount of words I speak or write will do anything to change the dramas that constantly repeat themselves in the poker world. And for that healthy dose of perspective, I have to thank the 30,000 strangers who gathered around a racetrack this weekend in Watkins Glen, my boyfriend, who encouraged me to join them, and four guys named Trey, Mike, Page, and Fish who put on one helluva show.

Good luck to everyone chasing the dream in the Main Event. I'll see you at the tables.
Posted by change100 at 6:37 PM 2 comments: