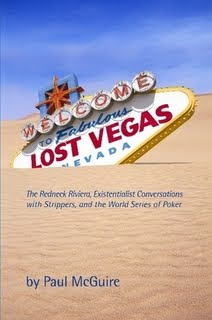 I'm supposed to be a writer but it's hard to put into words what it's like to watch the person you love the most on this earth fulfill their dreams after toiling night and day on their craft for so many years. I'm bursting with pride today for Pauly, because there is only one day in any writer's life where they can say "Today, I released my first book."
Today is that day for him.
Buy Lost Vegas, available right now exclusively on Lulu.com. Buy two. Buy five! They make excellent gifts. And if you can track him down at the Rio between now and the end of the WSOP Main Event, he'd be happy to sign your copy.
Congratulations, my love.
Posted by change100 at 4:20 PM No comments:

I woke up this morning in my own bed. As in, the bed in my apartment in Los Angeles. I'm home for a little over 24 hours to attend the wedding shower of one of my oldest friends (I wrote about picking out her gift here). I'm truly multitasking this morning as I'm writing this while watching the USA-England match and getting a pedicure from a man that looks like Doug Lee.
I wrote a couple of op-eds on PokerNews this week you should check out:
Don't Rain on My Parade addresses the debacle at yesterday's WSOP Ladies' Event when a dozen or so men decided to play to "make a point."
Bets Bigger than Bracelets talks about what it takes to get the elite pros interested in the preliminary events at the WSOP.
I also made another guest appearance on the Tao of Pokerati discussing douchebag bracketology. For example, what is worse? The guy who slowrolls you or the guy who screams "YEAH BABY YEAH!" when he wins a pot?
Pauly also wrote his take on dudes playing the Ladies' Event in Dude Looks Like a Lady and Get Baked.
I also got to cover one of the most loaded final tables thus far at the WSOP-- the $10,000 World Championship Stud Eight or Better. Congrats to Frank Kassela for winning his first bracelet.
You can also follow me on Twitter, although today's tweets may be more rich-people-wedding-related than pithy pokery platitudes.
Back in Vegas in 24 hours.
Posted by change100 at 12:13 PM No comments:

I'm back in the Rio covering the $10,000 World Championship Seven-Card Stud Hi/Lo event, or as AlCantHang has dubbed it "The Rock Garden Open." However, hardly anyone was paying attention to the stud action tonight with the Tom Dwan circus unfolding across the room. A good percentage of the Stud hi/lo field was sweating gargantuan side bets on whether Dwan would win a bracelet and seemed to be playing the $10K only to distract themselves. When Dwan lost heads-up, I've never seen all the tension sucked out of the Amazon Room so quickly. Goddammit, I was looking forward to writing the story of how "durrrr" broke the poker economy and took "The Corporation" for more money than Andy Beal ever did.
Anyway, since we don't have that to go on, here's a few stories I wrote this week along with some stellar reads penned by my friends and colleagues.
The $50K Players' Championship drew 116 players, up from last year, but the numbers are down overall at this year's WSOP, as I addressed in Deconstructing the $50K and Declining Donkament Fields.
F-Train also took a look at the year-to-year numbers in his post The Numbers Game.
I had to ship Pauly $60 yesterday after losing my first prop bet of the WSOP. He gave me 3-1 that another Brit would win a bracelet this year and thanks to James "Flushy" Dempsey, I'm out the price of a good eighth of hydro. Check out my beloved's recap God Save the Queen Reprise and Seven for Men.
I made a guest appearance on the Tao of Pokerati, where Michaski and I discussed the finer points of the "douchebag look."
Two pieces I wrote last week on my reaction to Victory Poker's ad campaign have received a bit of attention and plenty of haters. Victory's CEO even commented on the post on the Wicked Chops Poker Podcast. Decide for yourself by reading Ladies, Here's What Victory Poker Thinks of You and Victory Poker CEO Responds to Ad Campaign Criticism.
Finally, if you're around the Rio, take the time and give some of the PokerNews WSOP bloggers and floor reporters some love. They have a grueling, utterly thankless job and certainly aren't getting rich from it. Several high-profile pros have taken to Twitter to bash PN's WSOP reporting and if I had the necessary dough, I'd challenge any of them to do our job for a day and see if they could hack it.
That's it. The sky is beginning to lighten, so I'm bongin' out and going to bed.
Posted by change100 at 4:20 AM 4 comments: 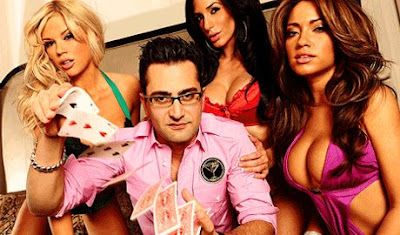 It's not sexism, ladies. It's "just marketing"
After Liv Boeree, Annie Duke, and Vanessa Selbst all took down major tournament titles earlier this year, the Entities at Wicked Chops Poker proclaimed 2010 "The Year of the Woman" and in their latest podcast, they speak with two of the more prominent ladies in the game-- newly minted EPT champion Boeree and Lacey Jones, who seems to be filling her resume with more and more poker television hosting gigs every week. Their third guest, however, was Victory Poker CEO Dan Fleyshman. As you all know by now, I'm not too happy with their marketing campaign and Fleyshman responded to the criticism lobbied at him not only by myself, but several others in the poker blogosphere.

Here is Fleyshman's response, which comes around the 15-minute mark in Episode 3 of the Wicked Chops Podcast

"I was pretty shocked. I mean, like everybody uses models in their campaigns and I think I did a pretty classy job of it. I used Playboy Playmates and I also used traditional models as well, from different countries. But I also used guys. Like, you know what I did? I did like, a strip poker photo shoot last week-- the guys were the ones topless in a lot of the shots and the girls were the ones winning the game. So for everybody to say, like, I don't know, to feel sexist in a way is like, weird to me because my very first charity event, I donated money to breast cancer. I sponsor the LIPS poker tour. I'm sponsoring the womens' events. Like, I'm involved on both sides of this. So it's just marketing. Like, i have to do everything. I'm not just focusing on models and I'm not just focusing on guys. I'm trying to do everything. So it was very shocking. That's why, if you've noticed, on the internet I'm defending myself a lot because I'm not sexist."

Fleyshman goes on to talk about how he's spending every weekend teaching Playboy Playmate Sara Underwood how to play poker, which I'm sure is a huge personal sacrifice.

"It does feel weird to me, because we're so open-minded and we're so across the board so it's weird that so many people would feel we're sexist," Fleyshman said.

Sorry buddy, but any way you slice it, there's nothing "across the board" when it comes to those ads. "Across the board," at least in my interpretation, would mean appealing to a broad demographic. I don't see how any of the images currently put forth by Victory Poker appeal anyone other than young men who enjoy looking at photos of surgically enhanced models.

Victory Poker's message is pretty clear. And in my opinion, "but I donated money to breast cancer" and "it's just marketing" constitutes a pretty weak-sauce response. Instead of teaching Playmates how to play poker, how about sponsoring some professional female players instead? Concerned about "marketing" and "image" and don't want to have someone (gulp) unattractive in your ads? How about putting a drop-dead gorgeous woman like Christina Lindley, Maria Ho or Lauren Kling on your team instead of relying on provocatively dressed models to sell your product?

And I'm sorry Mr. Fleyshman, but you're wrong. Not everyone uses models. Bodog tried that circa 2005 (as some readers pointed out in the comments after my last post) and look at their market share today If you want to head down that road, well, that's where it ends.
Posted by change100 at 10:33 AM 12 comments: