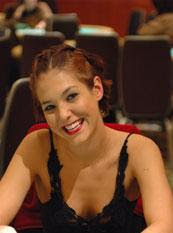 In a statement released on Neverwin Poker, it was confirmed that Brandi Hawbaker committed suicide this past Sunday. She was only 26.

Brandi was a magnetic yet ultimately tragic figure in the poker world. She rose to fame after coming out of nowhere to cash at the 2006 Festa al Lago WPT event at Bellagio and subsequently became embroiled in numerous scandals, including the infamous "Captain Tom's Penis" incident which she detailed on the Two Plus Two forums, inspiring one of the most-viewed threads in the site's history. More recently, her ex-boyfriend Brandon took to the forums to spill details of their relationship. Brandi was last known to be living in the Los Angeles area and playing cash games at the Commerce Casino.

Brandi attracted drama wherever she went, whether it was playing in the World Series and drawing every lens in the room to her table or sticking a Full Tilt patch on her nipple. It's no secret that she had severe emotional problems and had self-harmed before. She will be sorely missed by many, and the poker world won't be the same without her. My heart goes out to her family.

I'll write more when I get home, but for now, I have to get out of Monte Carlo and catch an early-morning flight to Frankfurt.
Posted by change100 at 7:03 PM

The classiest eulogy I've read yet. So sad. The heartache for the family and friends unimaginable.

Such a shame. No one should die that young. Especially by their own hands.

No matter what people say...sad that a young lady died.

How is a statement from NWP passing as a confirmation?

What I have yet to see is remorse from anyone over how they treated her when she was alive. Bloggers, including you Change, were happy to make fun of her many flaws whenever they showed up, but no one seems to be connecting all the online abuse that was heaped upon her with how this tale ended. It was clear that she needed a tremendous amount of help, but it certainly seemed easier for people to laugh at her rather than lend a helping hand. The online pen needs to be wielded with an understanding of its power to hurt as well as to help.

Jan, the reality is that we all have flaws. Some people make fun of mine on their blog...but they are b-listers. If I were to kill myself I would hope that they wouldn't repent on what they said about me. I love how they are jealous of me...b-lister and c-listers alike. We all know that when we go posting and ranting that we are going to draw some critisim...it is warrented...but I hope that doesn't stop people from keeping it classy when I die.