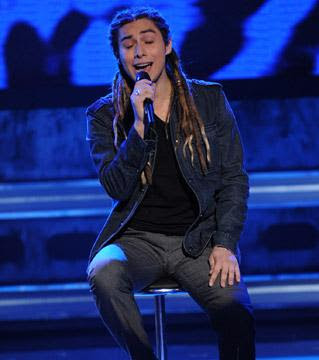 "Touch me! It's so easy to leave me!"
American Idol Wednesdays are back! I apologize for my absence last week-- Monaco television unfortunately did not carry Idol and I only caught up on my missed episodes over the last couple of days (the guys rock Mariah songs! Bye-bye Kristy Lee Cook!) Anyway, moving on to performances by the Top 6...

The music theatre lover's heart that beats inside this stoner's body went pitter-patter when I learned that it was Andrew Lloyd Webber week on American Idol. Granted, my taste in musicals runs more toward Sondheim than Webber, but nevertheless, I was excited at the prospect of this diverse spate of contestants taking on songs made famous by Broadway and the West End's best. Would there be a whole lotta' re-arranging? (yup) Girls picking guys' songs and vice versa? (uh-huh) Total nuclear trainwreck disaster performances? (absolutely) 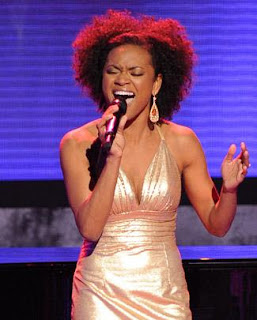 Syesha Mercado “One Rock ‘N Roll Too Many” Syesha dug into the far reaches of the Starlight Express score to come up with this choice (yup, that's the musical where everyone's on roller skates), and an incredibly shrewd one it was. This might as well have been Syesha’s Broadway general audition, because that’s likely where she’ll end up post-Idol and find much success. It was a fantastic vocal if a bit “old-fashioned” with the performance elements... but isn’t that... Broadway? This was a great night for her, and her performance should get her into the Top 5.

Wow. Total. Nuclear. Disaster. What possessed Dreadlock Boy to take on perhaps the ultimate Andrew Lloyd Webber female power ballad? Betty Buckley, Elaine Paige, Laurie Beechman, Liz Callaway and countless of other Broadway greats have put their stamp on this song. And they have... what in common with a 20-year old Jack Johnson wannabe? There were countless other song choices that Castro could have made that wouldn't have resulted in this train wreck– how about "Everything's Alright" or "Could We Start Again, Please?" for instance– that could have propelled him to a standout night. Instead, it was just kind of weird and puts him in serious danger.

Brooke White “You Must Love Me” WHOOA, she started over. WHOAA she forgot the lyrics! But she did recover admirably. Unfortunately, Brooke didn't deliver a great vocal this week and didn’t seem comfortable at all with the song. It didn’t sit well in her range-- she was popping up into head voice for half of it which is really not her strong suit. Again... with all the world-class power ballads she had to choose from and she comes up with this one? Did she think doing “I Don’t Know How to Love Him” with her guitar was just too obvious? Well if not that, than why not something like “Unexpected Song” accompanying herself on piano? Bad, bad song choices this week, kids. Goddammit, I have the sinking feeling she’ll go home for this one. Booooooo. 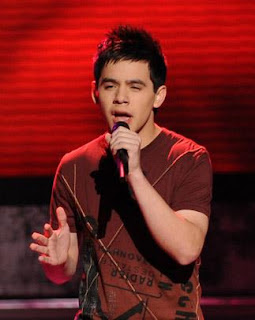 David Archuleta “Think of Me” It was not a bad arrangement of the song, if a little cheesy. Still don’t get what it is with him– I was totally bored. Over the last few weeks, David Archuleta's turn on Idol has become the "Change takes a piss/goes to the fridge/checks her email song." God he's just so clean and Radio Disney, isn’t it? This kid is totally going to be opening for Miley Cyrus’ tour next summer and subsequently falling from Middle America's grace the first time TMZ's cameras catch him sneaking into a gay club. I also wonder where he and crazy stage daddy got the arrangement-- anyone ever heard this version before?

Carly Smithson “Jesus Christ Superstar” Yeaaaahhhhh. Now that’s what I’m talkin’ about! This was a spot-on song choice, full of drama, and enhanced by perfect styling (love the dress!). It was also perhaps her gutsiest vocal. The spirit moved Carly on this one and the audience was along for the ride. Talk about the right performance from her at the right time. Viva la Carly! 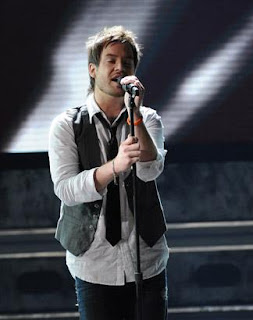 David Cook “Music of the Night” Another fucking bizarro choice! This is the first serious misstep we’ve seen from Cook in the entire competition. I mean, seriously, the rocker guy picks one of the most legit compositions in the Webber catalog? Cook's vocal wasn’t strong enough to save the song choice, despite the judges' praise. Sorry, it just didn't cut it for me. This is a full-throated tenor ballad and despite his solid money note at the end, left to fester in the public's mind... there was a lot of pitchiness in the verses. Could Cook find nothing else palatable, say from Joseph or Evita to put his rocker stamp on? Could he not get his mind around "Close Every Door" or "Oh, What a Circus" which could have adapted so easily to a rock aesthetic? Fuck, what about "Gethsemane" from Jesus Christ Superstar? With the right arrangement he could have blown the doors off the place with that one! I didn’t get this choice at all.


My (almost always incorrect) predition for the week: It's gonna be a horse race between Brooke and Jason. I think Dreadlock Boy wins by a nose, and survives to the Top 5.

The only contestant Dial Idol is predicting to be safe this week: David Cook
Posted by change100 at 1:09 PM

I couldn't believe Castro picked that song either! I thought he would have done something from Jesus Christ Superstar or "Any Dream Will Do" from Joseph.

At least Archuleta didn't do "I Don't Know How to Love Him" :)

Since the landscapers cut our cable line last night, I missed the episode. However, I agree that David Cook should have taken on "Gethsemane."

Here it is Thursday, and I think I'm still just as shocked as Brooke was that she wasn't in the bottom two along with DLB Jason.

But I was even more shocked as to who did land in the bottom two. It's definitely a popularity contest now. Vocal ability? Meh. Doesn't matter now, sadly.

The tweeners who cream for DLB and who are in denial about Archuleta's gender swing (but, really does he even know - I mean when has he had time in his young life to find out with Mega Stage Dad keeping him on the star track since he popped out of the womb???)

I was sorry to see Carly go. I had high hopes for her. I'm holding out for David Cook, he's the only one left who has a very slight chance of getting me to download an AI tune.

Archuleta? As I said to a friend this week, doesn't he remind you of a Forrest Gump who can sing?

It was certainly a dark night for Idol last night. My horse is out and now, like Kym, I'll be rooting for David Cook.

Remember my words...Castro was going off at 35-1. VALUE

Before this most recent vote, he went off at 25-1.

Again, I still don't think he will win, but anybody who put down some cash at 35-1 has to be happy, because the odds likely won't get any worse for him.

That said...the major thorn in his side is the other David. He's drawing the young, teeny bopper girl vote away.

So, for Castro to come in, the following things still have to happen...

1) There will have to be a public announcement that David Archuleta, a boy, likes boys.

2) David Cook will have to finallly succumb to the inevitable emotional/physical breakdown.

3) Brooke White will have to drop her hotdog at lunch, fall into a sobbing heap of hippie barefoot tears and refuse to go on stage.

4) Syesha Mercado will have to say the word "cunt" on the air.

Yeah, odds on all happening are pretty rough. But, as I said...VALUE.

I don't want it to happen that way, but odds and history say it will. Rockers can get far, but not far enough. What we're seeing here is a repeat of the Clay vs Reuben standoff that left Broadway as runner-up and R&B as the winner.

I don't want anyone to mark my words, but that's where my money would be...if I were a betting man.

Can't we twist Danny Noriega's comment that he and David Archuleta are 'close' into some comfirmation that he's gay? I will drink Liquid Plumber if he or Syesha win. Carly was my horse, too; I guess those tats were just too edgy for Middle America.

Now I'm rooting for David Cook, because I believe he's secretly an alien who will lead us all to peace and happiness (c'mon, that baby picture was a clear giveaway that he is in fact, a Kanamint infiltrator with several copies of the book 'To Serve Man' lying around the house).

I was really surprised that Carly was voted off last night. Although I thought she deserved to be in the bottom two, if not gone, the previous week when she screamed through a Mariah Carey song. I did think that Tuesday night was one of her better performances - especially since she wore a nice dress and hid the ink.

But how was Brooke not in the bottom two last night? She should be gone!

It's a conspiracy. Notice that all the foreigners are now gone? The American public doesn't want a foreigner to win. FOREIGNER maybe, but not A foreigner. Whatever that means.