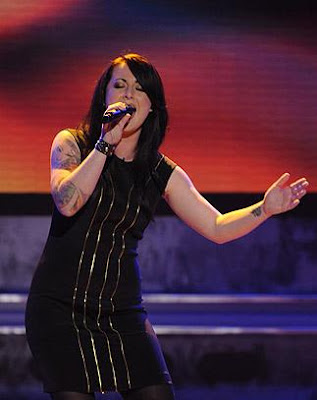 Pint-sized Ramiele Mulabay was finally booted from the competition, after a flat, uninspired rendition of "Do I Ever Cross Your Mind?" during Dolly Parton week. America was left thinking "Sheesh, that Dolly Parton's a good songwriter! I had no idea she wrote that song from The Bodyguard!" Kristy Lee Cook was again spared and she comforted a distraught Ramiele by pressing her teary face into her cleavage.

Now, it's "Inspiration Week"-- that feel-good run-up to the reality juggernaut's star-studded charity climax, Idol Gives Back that airs tonight. The contestants were tasked with performing songs that inspire them and judging by their choices, some of these kids are in dire need of a CD collection makeover. I just hope to God they actually eliminate someone this week and don't pull that "everyone stays because it's for charity" B.S. that they did last season. I seem to recall screeching at the television set in a Las Vegas hotel room this time last year when Timber-lite and the chrome-domed Phil Stacey were both spared.

Anyhow, on with the show...

Michael Johns "Dream On" Uhhhhh... why is he dressed like a pirate? Seriously, all that get-up is missing is an earring and an eye patch. The tight white short-sleeved shrit is gay, the tight black vest is gayer and the kerchef just takes the whole outift to the point of no return. Oh yeah, the song. There was something inauthentic about his performance. It was like, a watered-down, Vegas version of what an Aerosmith song should sound like, and ultimately the piece was just way too much for him to handle. This vibe doesn't work for him at all as an artist. Wait a minute... why is Sinbad in the audience? Why is the machine from the movie Contact spinning in the background? I am so confused. My drugs really can't be that good.

Syesha Mercado "I Believe" Last week Syesha handicapped herself by choosing a song made famous by Whitney Houston of all people. Now she does it again by singing Season 3 champion Fantasia's winner's single of all things. Of all the songs... of all the songs... of ALL THE SONGS OUT THERE, she picks this? Seriously, she deserves to get voted off after this completely brain-dead choice. I don't give a rat's ass about what your connection to the song is. Get inspired by something else! Get inspired by Gladys Knight or Aretha or Corinne Bailey Rae, or Jill Scott or pretty much anyone else besides a past Idol winner. And the thing is, technically, Syesha sang parts of it better than Fantasia did, but no one's ever going to remember that since her rendition was completely devoid of that straight-from-the-gut emotion that is Fantasia's hallmark. 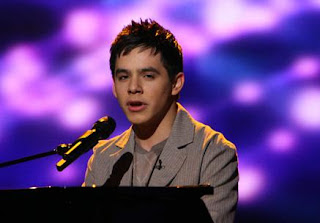 David Archuleta "Angels" Boy Wonder got back on the piano and completely put me to sleep during the first verse. It perked up a bit in the chorus, but the adult contemporary hour starring David Archuleta is never going to do much for me. I actually didn't think it was that great of a vocal either, but what does that matter since he's going to get an avalanche of votes and more praise from the judges anyway. Seriously, this kid could walk out, drop his pants and take a dump on the stage and Cowell would think it's brilliant. Next!

Jason Castro "Somewhere Over the Rainbow" Dreadlock boy was perched back up on his stool, lapsing into falsetto and straddling the line between hippie and wookie as he delivered Israel Kamakawiwo'ole's arrangement of "Somewhere Over the Rainbow," all while accompanying himself on ukelele. It was a smart song choice for him and he did an OK cover-of-a-cover, but in the spectrum of his competition on the show, it was still very dormitory coffeehouse. Pauly wasn't a fan either. "It sounds like the soundtrack of a Lifetime Movie of the Week" he quipped. It' s probably enough to get him through another week, but I still don't see him cracking the Top 5.

Kristy Lee Cook "Anyway" How many times is this girl going to wear a silver sparkly tank top and denim? It's pretty, but I'm just sayin'. Well, the song had a couple of mentions of Jesus and praying in it, so that red state voting bloc that lapped up her version of "God Bless the U.S.A." is going to love this too. And that's good news for Kristy Lee, who has been a fixture in the bottom two over the last several weeks. On the final chorus, she actually reminded me a bit of Carrie Underwood-- full of those belty country straight-tones and absolutely nothing behind the eyes. Pretty shrewd song choice, though. I also couldn't help but notice that Paula's pharmies totally kicked in during this performance, prompting her to stand up and start dancing... even though this was a ballad.

David Cook "Innocent" Cook's song choice was written by his favorite band Our Lady of Peace. OK, that's nice for him, but does his target voting audience of 14-year olds know who the fuck they are? So Cook shot himself in the foot a little bit there by picking a song that the audience will have no connection to. Then he lets someone dress him in a really gay white military jacket that, though sequinless, was very Elton John circa 1975, and writes "Give Back" in marker on his hand to cheesily flash at the camera. I don't get it either, dawg. This was by far Cook's weakes performance on the show. Wait... is that Ivanka Trump in the audience? Her boobs look way fake.

Carly Smithson "The Show Must Go On" You all know I love Carly, but she was pitchy and lacking power on the belty sections. I liked what she did on the choruses, but the performance lost focus during the verses. Why take on Queen when she had such an opportunity here to perform something more in her wheelhouse? How many hundreds of other songs could her voice have sounded better on? I agree with Simon when he said she lost control of the song, and that it seemed a bit "angry." God, I hope she got enough votes to slip through because this effort is right on the border. It really would be a shame to lose her this early.

Brooke White "You've Got a Friend" I kind of would have like to see her on the piano on this one because it might have brought out a bit more emotion in her delivery. Simon described it as "Sort of a pleasant walk in the park" which I think is apt. It was pretty and pleasant to listen to, but it didn't knock my socks off. Brooke needs to be careful and not play it safe another week, or she might be in real danger.

My prediction for the week: I hope it isn't Carly but it really might be. Otherwise I think Syesha might be in trouble.
Posted by change100 at 2:16 PM

I'm with you on Carly - I keep pulling for her each week, but she keeps missing. She needs to glam it up a bit - borrow one of Christie's sparkly tops or something and pick the right song. She's an outstanding vocalist and it's getting lost amidst some bad choices otherwise.

Unless Carly gains some fashion sense (i.e. covering that awful tat), she's gonna be in danger.

She seems to be hoping for the Fantasia syndrome, where the judges convince the public that an unmarketable, unattractive good vocalist should win over a potential pop star.

Not one of them picked a great song...maybe David A, but he's so annoying, I wasn't listening.