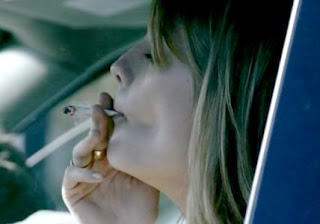 Change100 is a Los Angeles-based freelance writer. She spent seven long years working inside the Hollywood film development machine during the early and mid-2000's before joining the ranks of the self-employed. Change100 was a stupid name she picked for herself during that fateful lunch hour in the summer of 2005 when Pot Committed was born. It's a reference to her brief, losing stint as a blackjack player and unfortunately, it stuck.
In the summer of 2006, Change covered the World Series of Poker for Party Poker's Pokerblog.com. When the UIGEA chased Party away from America's shores, she went to work as a tournament reporter for PokerNews.com. Since then, she's visited dozens of countries and four continents, covering poker's premiere events including the World Series of Poker, the Aussie Millions, the World Poker Tour Championships, the World Series of Poker-Europe, and countless stops on PokerStars' European Poker Tour and the Latin American Poker Tour.
From 2007 to 2009, she wrote Bluff Magazine's gossip column, "Bird on the Rail" under the pen name Nicole Gordon (yeah, that's two secret identities if you're counting). From 2009-2010 she made the transition from tournament reporting to feature writing for PokerNews.com, where her articles appeared daily under the name Nicole Gordon. She is currently a regular contributor to the PokerStars Blog, covering events on the North American and Latin American Poker Tours.
After 5 1/2 years of successfully flying below the radar, Change's secret identity finally failed when she earned her first major live tournament victory. In January 2011, she won the $1,000 Ladies No-Limit Hold'em event at the PokerStars Carribean Adventure for $29,798. It was totally worth it.
A Los Angeles native, Change earned degrees in film and theatre from the only private university in the Big Ten. She lives in the slums of Beverly Hills with her boyfriend Pauly, author of the Tao of Poker and the novels Lost Vegas and Jack Tripper Stole My Dog.
Posted by change100 at 4:20 PM