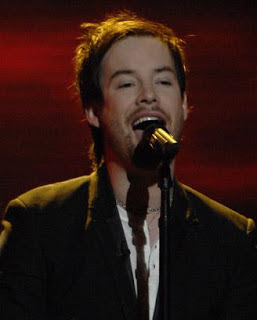 Kelly vs. Justin. Reuben vs. Clay. Fantasia vs. Diana. Carrie vs. Bo. Taylor vs. Katharine. Jordin vs. Blake. And now, David vs. David. I've watched them all-- from witnessing Kelly Clarkson tearfully warble "A Moment Like This" while sitting in the living room of my first L.A. apartment, to last night's unfortunate boxing-themed duel of the Davids, which I caught from a New Orleans hotel room. Of the seven American Idol finales, only two have been truly competitive-- season two's, which pitted a 350 lb. "velvet teddy bear" against a skinny nerd from North Carolina with a golden voice that defied his awkward appearance, and last night's David vs. David affair, where despite the pundits' and oddsmakers' predictions that Cook would take the title, it was really anyone's game.

Unfortunately for these two talented men, the Idol producers decided to kick off their final night of competition with cheeseball introduction that bore a boxing motif, complete with the "Let's get rrrrrready to rrrummmmmbbbblle!" dude in the announcer's role. Ohmygod did they really make those poor kids come out and wear silk boxing robes and gloves as they were introduced to the crowd? Well, yeah. It is FOX, after all.

David Archuleta, or "little David" as Seacrest branded him, won the coin toss and smartly elected to sing second. And once they touched gloves (really), it was time to strip off the robes and get on with the show. Each David had three songs with which to wow the voters. Their first number was chosen for them by music mogul Clive Davis. For the second one, the contestants chose a new song from the 20 finalists' entries into the American Idol songwriting contest. And for the third, it was the contestants' choice. In past seasons, many of the Idols have chosen that slot to reprise one of their best performances from a past episode. Others have chosen something entirely new to them.

"This is duel, baby. For the KING of the Nokia Theatre!" bellowed Randy Jackson as the starting bell rang. 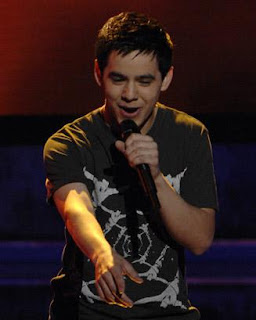 David Cook "I Still Haven't Found What I'm Looking For" Cook's take on the U2 classic started off softly, with a single electric guitar accompanying him on the first verse and it slowly built to an anthemic conclusion. It was a solid vocal treatment by Cook, but honestly, he didn't do anything terribly interesting with the song and it never hit a real high point for him. Though he was in far better voice than last week, I think Cook could have done a bit more re-arranging on the song instead of sticking so closely to the original. Maybe a 7 out of 10 for this first round.

David Archuleta "Don't Let the Sun Go Down on Me" For the first time all competition, David Archuleta looked like a scared little boy as he sat on the steps of the stage, singing the first verse and I was reminded that holy shit... this kid is only 17. I'm not the biggest Clay Aiken fan (we'll leave that title to my mother), but Archuleta didn't do nearly the job with the song that Aiken did five seasons ago. Despite Randy, Paula, and Simon's fawning comments at the end, I thought he looked like he was trying to hard, even shouting to be heard in parts of it. Simon declared Round 1 to Archuleta, but I think it was more of a draw.

THE (GOD-AWFUL) NEW SONGS
David Cook "Dream Big" Yay, he brought out the axe! Of course the songs they're trotting out this round are going to be pretty lousy if past seasons are any sort of indicator, but Cook's rocked-up version of "Dream Big" wasn't half bad, given that it was a below-average composition and he got in a NICE money note at the end. Despite the corniness of the song, I thought this was one of his best vocals ever. But was the song itself strong enough to be the winner's single and get it's fair share of radio airplay? That's debatable.

David Archuleta "In this Moment" Of course he picked a cheeseball pop ballad, firmly entrenched in the adult contemporary genre. He delivered a predictably good vocal while donning a predictably trendy blazer with a patch. But dude... the song itself sucked serious ass, despite Simon's assessment that Archuleta chose the better song. He declared Round 2 to Archuleta, but this time I disagree... it was Cook all the way.

David Cook "The World I Know" Cook chose a Collective Soul song which he admitted in his pre-performance chat with Ryan Seacrest that he had never sung before. He brought out an acoustic guitar and went into a slightly more downtempo version of the original that I thought really showed off his vocal colors. Tearing up and breaking down a bit after the final chords, Randy Jackson praised his performance, loving that his choice allowed the "sensitive side" of David Cook, to shine. As for Simon, he noted that Cook is "one of the nicest, most sincere contestants we've had... but I'm going to be honest, it was completely the wrong song choice for the night. You should have sung 'Billie Jean' or 'Hello.'" And perhaps he's right. While "The World I Know" would have been a great pick for Cook during the regular season, the better third-round play would have been to trot out something familiar that the audience already loved and could readily identify. I would have gone for the Lionel Richie song, personally.

David Archuleta "Imagine" Archuleta made a shrewd choice for his final performance, picking the song he performed the best all season, and also selecting something he's sung for ages and is obviously comfortable with. A great choice and a strong performance, as this is the one that's going to be stuck in the mind of America at the show's conclusion. "You are exactly what this show is about... and the best singer of season 7 is right there!"said Randy. "You came out here tonight to win, and what we've witnessed is a knockout" opined Simon as Archuleta held back tears of joy.

David Archuleta truly wanted to win this competition... almost as much as his Scary Stage Daddy wanted it for him. It's not like David Cook phoned it in or anything last night but let's remember-- Cook auditioned on a whim...he was only at the auditions to support his brother when the producers picked him out of the crowd to sing for the judges. Archuleta, on the other hand, has been dissecting the show since he was 10 years old.

If Dial Idol, the various pundits, and the public momentum is to be believed, David Cook will be crowned our seventh American Idol tonight and Otis and I will push our bet.

But that's fine with me if a rocker finally wins.
Posted by change100 at 9:09 AM

God. It pains me to admit that "Gaspy" outperformed Cook last night.

I don't admit it. Little David is a singer with a great voice, nothing more. He knows how to hit the right notes and he knows how to mimic emotion in the right part of the song.

David Cook is a performer with a great voice. He can interpret songs and he can be original. I preferred Cook last night... but that's no surprise since I can't stand Little David.