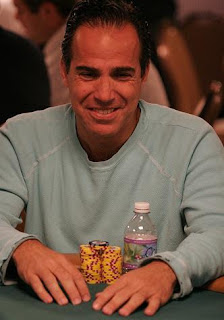 I learned very quickly in Hollywood that behind every seemingly brain-dead decision is one helluva ulterior motive. When Eddie Murphy, a movie star who could wipe his ass with $100 bills for the rest of his life and never go broke decides to make a piece of shit like Norbit the question arises: Why the FUCK is he making this movie?

Is it money? Is is ego? Does he actually think this flaming bag of shit is actually going to be a good film? Or is it something else entirely?

So why on earth would a guy like Cliff "JohnnyBax" Josephy-- an extraordinarily talented player swimming in money who enjoys a sterling reputation in the poker industry--decide to go and sign with Ultimate Bet, just as the hard evidence of a UB superuser scandal, eerily similar to the Absolute Poker Shitstorm of 2007, is breaking?

Seriously, I can't think of one other reason why Josephy would decide to align himself with this company at this time. Why not wait until this infamous "report" is released by UB's supposedly squeaky-clean new management team? I can think of plenty of reasons why UB would want to sign him. There's serious value for them in getting a "good guy of poker" like Josephy on their side, especially in terms of rehabilitating their image among the hardcore online players/2+2 crowd.

Josephy/Bax released a statement on the Pocket Fives forums this morning:

Hey All, I have always enjoyed playing at UltimateBet. The interface and the structure are 2nd to none. It is my belief that management is committed to doing the right things on a going forward basis. Thus, I have decided to support them. I will do all I can to ensure the players really like the improved UB.

I implore you all to read through this piece, Superusers and Silence: How Ultimate Bet let players get cheated for millions by Stephen Ware and Cornell Fiji, which originally appeared on the 2+2 forums.

very very odd. but according to Mindwise's blog from today:

"First off, there is no agreement between PokerXFactor and Ultimate Bet, it is between UB and Bax. People have actually posted that PXF must own a part of UB now, lol. PXF is owned solely by my company, Mindwise Media, LLC and we have no deals with UB. Bax and Sheets do not have an ownership position with PokerXFactor or Mindwise Media. They are PXF’s founding pros and they are very important to the site."

the plot thickens more. UB signed Rizen as well. He's been a PXF pro for a while now. Their PR release talks, once again, about the high level of integrity he has. You might be right about some buy-out, although Mindwise and Sheets deny it.

BTW, enjoy your PokerNews reporting. Keep up the good work.