I perked up a little when I read Ryan's Twitter about spotting a woman whom he thought was Tiffany Michelle wearing a PokerStars logo at the first event of the Legends of Poker tournament series at the Bicycle Casino. He "wasn't 100%" though, and now we know why.

Tiffany Michelle has now officially signed with Ultimate Bet as a member of its "Star Players Team." She joins Cliff "JohnnyBax" Josephy and James "POKERPRO33" Campbell on UB's roster of recent signees, whom the company hopes will aid in rehabilitating its tarnished image in the online poker community. 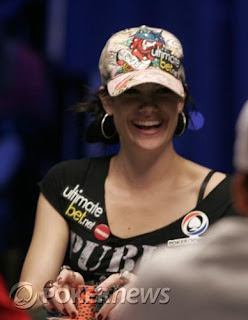 For obvious reasons, I think this is a potentially catastrophic career decision.

The full text of the press release appears below:

"From Hollywood to Vegas, Tiffany Michelle is a rising star in so many extraordinary ways," stated Annie Duke, UltimateBet's Cardroom Consultant. "We're thrilled to be able to bring such a talented force on board."

This 24-year-old actress and singer/songwriter has quickly become one of poker's most recognizable female pros - and it's no wonder why. The cameras were rolling at this year's World Series of Poker when Tiffany Michelle, the last female player left standing in the Main Event, outperformed her way to an impressive 17th place finish, beating the largest field to date by a woman. The Hollywood actress walked away with $334,534 in cash and was sporting UltimateBet gear as part of the online poker site's much-talked-about UB Army program. Tiffany has worked with some of the biggest names in Hollywood, appearing in a variety of popular films and several celebrated American television series including ER and Nip/Tuck. Tiffany turned to the game of poker to supplement her acting income between film and television projects and began playing poker tournaments online at UltimateBet to hone her game, quickly discovering additional success at land-based tournaments and in cash games. In virtually no time at all, Tiffany went from gaining roles on the audition circuit to gaining respect at the poker tables.

Tiffany Michelle joins two of poker's most revered online players-- Cliff "JohnnyBax" Josephy and James "POKERPRO33" Campbell--on UltimateBet's roster of high caliber players. She can be found playing online poker at UltimateBet under the name Tiffany M and will be featured in a variety of future promotions on the site. Online poker players can employ UltimateBet's free UltimateBuddy software to discover where Tiffany M is seated and instantly join her at the tables.

Campbell can be found playing online poker at UltimateBet under the name POKERPRO33 and will be featured in a variety of future promotions on the site. Online poker players can employ UltimateBet's free UltimateBuddy software to discover where POKERPRO33 is seated and instantly join him at the tables.
Posted by change100 at 10:01 AM

Can't imagine why. The $ couldn't have been that much more than others offered. Burned her bridges with P-Stars, I guess.

Hopefully she got a cashier's check or cash up front for a lot.

I hope pokernews puts money on her head. I would.