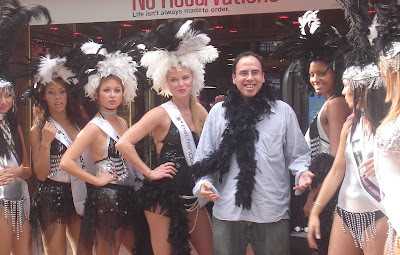 Pauly and the WSOP Showgirls outside the LCI Empire Casino, Leicester Square

I offered my beloved 20 quid to take this photo. He said he'd do it for free.

We arrived safely last night in Jolly Olde England and a 60 pound cab ride later (that's $120 U.S., folks) we were ensconced safely in our (surprisingly posh) hotel just off Trafalgar Square. We're in the middle of tourist central, but less than a 5 minute walk from the Empire Casino where the inaugural WSOP-Europe will kick off tomorrow. I've already enjoyed some of the best Indian food of my life in my short time here (though Dr. P did not agree) and the weather is blissfully fair after sweltering for a week in Spain.

Our 30 hour jaunt to Amsterdam absolutely hit the spot for me and I'm thankfully back off the cannabis wagon. The trip was absolutely a blur and I think we hit up at least 7 hash bars (a far cry from the record 13 in 10 hours we did a week ago, but that's a blog for another time).

We took a lovely walk to the Southbank this afternoon and snapped photos of the London Eye, the Houses of Parliament, Big Ben, and Westminister Abbey. Hopefully I'll have a bit of time tonight to upload and edit them.

Now we're off to dinner. Italian food I think. After making Pauly suffer through curry, it's his choice tonight.
Posted by change100 at 9:22 AM

London might have the best Indian food in the world.

I found during visits asking one of the local Bobbies, they always know the best restaurants.