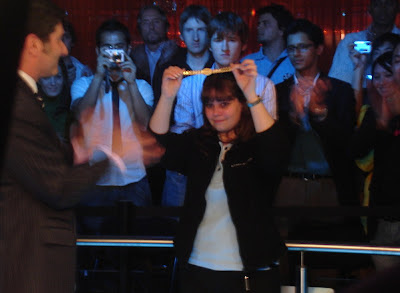 Annette Obrestad hoists her WSOP Bracelet in victory
She didn't stand up during the final all-in. Instead she remained in the "thinker" pose she had adopted for the entire tournament. Calm, impassive. Her head resting on her left hand balled into a fist. Eyes invisible behind dark, square-shaped sunglasses. Thin lips neither smiling nor frowning. Her opponent stood and paced, no doubt thinking of the the miracle the dealer would have to pull out of the deck for him to survive this hand. But she barely moved a muscle.

When the final card was dealt, locking up the hand for her, there was maybe a minute before the officials counted down the two stacks to make sure she had her opponent covered. And still she barely made a twitch. When Jack Effel got back on the mic and announced to the crowd of spectators that she had indeed won, that was the moment that Annette Obrestad's stone face melted and she burst into tears.

I almost wanted to cry myself when she won, and I know it wasn't alone. Read any poker forum this morning and you'll find a number of accounts of grown men tearing up as they followed the coverage and read of Annette's victory. I don't think such emotion could be stirred by the victory of any other player on the circuit today. It took an 18-year old, five-foot tall Norwegian girl to move the poker world to such emotional heights.

Annette Obrestad not only won the first-ever World Series of Poker Europe Main Event last night, she shattered maybe half a dozen records in the process that won't easily be broken again. Obrestad became:

(4) The top money-earning woman in WSOP history. Annie Duke held this record for exactly one day, with the $61,000 or so she won for her 21st place finish in the WSOPE Main Event inching her over the $1 million mark.

(5) The largest single-tournament female money winner. This also erased another one of Duke's records, the hideous GBP to USD exchange rate making Obrestad's one million pounds the equivalent of $2,005,552.00, just inching out the $2 million Duke won at the 2004 WSOP Tournament of Champions.

(6) The only midget to win a WSOP bracelet.

OK, that last one is some drunken B.S. Snoopy came up with while guzzling victory Coronas with the Poker News crew last night.

I'm a journalist and I'm supposed to be impartial, but I was secretly pulling for Annette. I personally watched her knock out three of the world's most successful female players along the way-- Annie Duke, Jennifer Harman, and Beth Shak. Sure she sucked out a few times. Sure she made a couple of mistakes. But who doesn't in a five-day tournament.

When the final table resumed after dinner break, WSOP Commissioner Jeffrey Pollack took a ringside seat next to me and my laptop.

"Hey, can you stick this behind your computer?" he asked, holding out a sleek wooden box. It was the bracelet.

"You know, this is probably the closest I'll ever come to one of these" I deadpanned.

A while later, after Annette dragged a big pot, I leaned over and whispered to him.

2007 is turning out to be poker's "Year of the Nice Guy." Just look at Tom Schneider's two WSOP bracelets and Player of the Year victory, Bill Edler's WSOP and WPT titles, Jerry Yang's myriad of charitable contributions after his $8 million win in this summer's WSOP Main Event, and now, the London coming-out party for the shy, soft-spoken Annette Obrestad. It's always sweeter to see the nice guys have success in the poker world so often dominated by the "ship it holla ballas."

Congratulations, Annette. You are scary good and an inspiration to all of us internet donkeys.
Posted by change100 at 8:18 AM

Wow - chalk one up for the ladies of poker.

At 18, I was delivering chinese food.

Fantastic! I am so happy for Annette Obrestad for winning the WSOP event. She has been tearing it up online for the last year and now she has shown that a woman (a young woman) can play and win against the big boys!

I know I'm a few days late on this one - but awesome post change. You moved me almost to tears!

Just surfed in, just to say Annette poker blog is up and running.

Nice writing. A chick and a chair...Touché