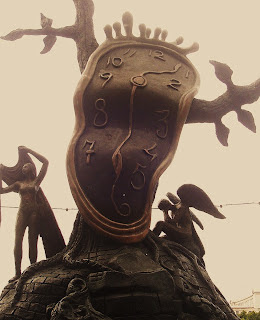 Today marks the sixth morning in a row that I've woken up before 7:00 A.M. Believe me, it's not intentional. Even back in the days when I had a "traditional" job and an office, I wasn't rolling out of bed any time before 8:30. And even that was a stretch.

Wednesday morning I was up at 6 in a London hotel room to catch my flight back to the States. I got home around 5 in the afternoon, which was more like 1 A.M. U.K. time, and after that flight from hell, fell asleep within 30 minutes of sinking into my couch. The next morning, I was up at 4, having slept the better part of 11 hours and enjoyed what is becoming a just-back-from-Europe ritual-- a bacon, egg and cheese breakfast biscuit from Jack in the Box (Because really, what else is open at that hour? My local diner, Nick's doesn't start serving until 6.)

Thursday night I managed to stay up all the way to the end of the Jean-Robert Bellande edition of Survivor and dozed off around 9 P.M. Which meant I was up at 5 in the morning again on Friday. Another bacon, egg and cheese biscuit for me. I played online poker that night staying all the way up until 11 P.M., but was up again at 6. Same thing on Saturday night-- I started watching a movie with Showcase and Tina, but was unconscious by 10:30. Which led to waking up at 6 on Sunday morning. I took two bong hits and saw that Field of Dreams was just starting on HBO. I love that movie and always cry like a little girl at the end when Kevin Costner plays catch with his dad. Only, thankfully I fell back asleep before James Earl Jones started hearing "the voice" at Fenway Park.

Last night, passed out at 11. And now, awake at 7. I seem to be beating this jet-lag back by only an hour a day. On my way out, I had no problems adjusting to the 9-hour time change. Coming back... well that's just a bitch.

With the time change screwing with my internal clock, I have found time at odd hours to start playing poker again. During my entire time in Europe, the only poker I played were two $22+2 turbo SNGs on Full Tilt. The first, I won while sitting in our kitchen in Amsterdam ripping bong hits with Pauly and Johnny Mushrooms. The second, I bubbled while on dinner break at the Fifty Casino during Day 1B of the WSOPE.

While I was up at 4 AM on the first day of jet lag, I found a rockin' $3-6 Omaha 8 or better game on Poker Stars and after about 45 minutes, hit and run for just under $100. Then I dicked around for a while playing $2-4 LHE on Full Tilt and broke even. I played LHE and LO8 at strange hours over the next couple of days and racked up a few hundred bucks before deciding to take an under-rolled shot at a $5-10 LHE game with two fish I had previously flagged sitting in, but I couldn't hit a flop to save my life and ended up dropping $250 over the course of about 3 hours.

With almost half my balance on Full Tilt gone poof, I turned back to the ye olde reliable $22 SNGs to grind it back up. The first day I went 4-4-1. And the second day I went 1-1-3-5. And this morning, I woke up and found an email from Full Tilt that went something like this:

Upon the conclusion of a recent investigation we have determined there were players involved in collusion against you.

In this instance, we have seized the winnings of the players involved and your tournament placing has been adjusted. You have been refunded $59.40, which you can find in your Full Tilt Poker account.

Please note, for various reasons, we are unable to advise you of the names of the players or any other information regarding this case. We thank you for your understanding in this regard and hope you will accept the refunded money with our best wishes.

Sweet... I get second place money back in my account, which happens to completely unstick me from my $5-10 losses. But which SNG was tainted with colluders? (And seriously... why collude in a lousy $22 SNG?) There are only 7 to choose from and I only had the hand histories for the 5 I played on the mega-laptop (I hadn't set travel-laptop to save them yet). This was the only hand that looked a lil' fishy to me from the 5 transcripts I reviewed. It was the one where I finished third. My two opponents had barely played a pot against each other once we reached the money, but were very eager to get involved with me. Though in this hand I'm the short stack, I was a steady second in chips until the hand immediately before this one. Both were playing multiple tables, with Ass Hat #1* playing at least 12. And both had been playing very tight for three-handed play...that is, until this shove-fest:

So Ass Hat #1 wins, Ass Hat #2 takes second since he had me out-chipped at the start of the hand and I finish third.

At the end of the day, who knows? A re-shove over the top with pocket fours is a lousy play, but it is a $22 SNG and I've seen a helluva lot worse. More likely than not, the two colluders were caught doing something even sketchier at some other table and Full Tilt looked into all the SNGs they'd played that day and decided to seize their winnings and refund them to their opponents.

Oh... one final note. My beloved is in Key West with Al Can't Hang. God help him. After only 48 hours in Florida he's been nearly jumped by hooligans in a liquor store parking lot in North Miami and dropped over $400 on lap dances from dirty strippers (his words not mine). I join the party in 3.5 days and began training my own liver last night for the inevitable damage with a bottle of Australian Shiraz.

(*= not his real name, but perhaps a real Ass Hat)

Glad to see you're in training not just for the Florida drink fest, but with the inclusion of Australia Shiraz, for the down under leg of the festivities.

Looking forward to having you down here.