See You in Key West

My mother will be here in about 20 minutes to take me to the airport where I'll board a flight to Miami and hopefully make my connection to Key West, arriving there around 9:30 this evening. These increasingly frequent rides to LAX she takes me on are really the only times we've had to catch up over the last couple of months. Hopefully the pot brownie I'm eating for breakfast will sufficiently knock me out for the duration of the flight. And hopefully I'll have a window seat, as I have now triple-checked with the airline.

Amidst the usual pre-travel errand-running and laundry-doing, I played some poker and actually took down an $11, 90-person SNG on Full Tilt. It's been a while since I won anything of the multi-table variety, so how about a celebratory screen shot? 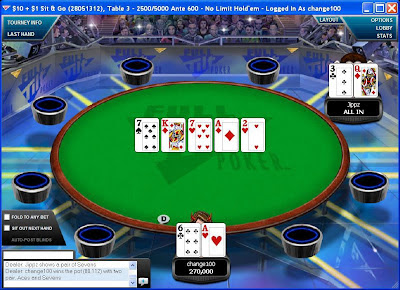 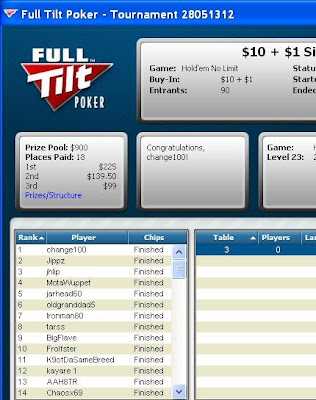 I got heads-up with the guy who had held the (significant) chip lead the entire tourney at an 10-1 chip disadvantage and still managed to take it down. I hadn't played good poker like that in a while.

I'm celebrating your poker win, not catcalling you, so no reason for Pauly to punch me out.

Congrats!!!! Have fun in Key West!

What a good way to start your Key West experience.

That should buy a lap dance or two :)