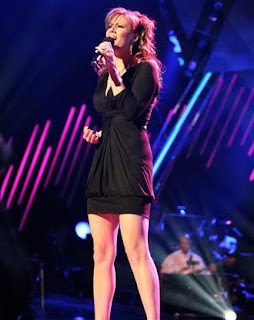 It's Tony Bennett week, Idol fans! With only 9 pop star wannabes remaining, the show has shrunk back down to one hour from the 120-minute marathons we've had for the last couple of weeks. Tony Bennett's guest appearance meant that the Idols would have free reign of the "Great American Songbook" of jazz, swing, and standards. In terms of vulnerable contestants, hot pants fan Haley Scarnato and bald wonder Phil Stacey needed to pull out all the stops in their performances last night, and Gina Glocksen had to turn out another consistent effort in order to maintain her momentum from last week.

So, how did they do?

Can one beat-box to Mack the Knife? Thankfully we'll never find out, as Blake left the sound effects at home for his second consecutive performance. I think this was one of Blake's better vocals. I dug the cool jazzy vibe but still felt a disconnect between him and the song he was singing. He had all the little quirky choreographed moments and winks and little dance steps down, but there was very little storytelling. A good effort from him I guess, but he's still nowhere near the top of my list. Next!

Phil is the best male vocalist left and I desperately want him to pick a good song for once. Well, it didn't happen again this week. Though it showed off his range and gave us a few good high notes, "Night and Day" has SUCH a plodding melody and tempo both of which were exacerbated thanks to his delivery. This wasn't a fun performance and Phil really needs to let out more of his personality... if he lasts another week. I just don't get who this guy is or what kind of singer he wants to be. Though he does have a helluva vocal instrument to work with. I think he's this week's most vulnerable contestant.

Melinda Doolittle: "I Got Rhythm"

"You like me, you really like me!" I love this girl. Like the judges, I can't find anything wrong with her because she just keeps knocking it out week after week. Her performance had life and spark and pizzaz. Kind of the anti-Phil. She has lapped the competition and can cruise to the finals. And that ending? Chills. Who could ask for anything more?

Chris Richardson: "Don't Get Around Much Anymore"

Ohhhhh I'm so scared... Timber-lite's voice couldn't be worse suited to this genre. And I'm so sick of those Ashton Kutcher hipster fedoras. Look, it wasn't his worst vocal but I found myself listening to the band's horn section over his nasaly belt. The judges are on crack when it comes to Timber-lite. "True artistic integrity?" "Too hip and cool?" Tell me, what part of suspenders hanging around someone's ass is hip and cool? I just don't get it. AND HE SINGS THROUGH HIS NOSE! GET A VOCAL COACH!

Jordin Sparks: "On a Clear Day You Can See Forever"

Jordin takes on Barbra! You knew that was inevitable. But really, couldn't she have found better song in this genre? Something with a stronger melodic line? I hated Jordin's styling choices again as well. Seriously, someone please shit-can whomever is dressing this girl. I mean, the second I saw the outfit, I knew Simon was going to say "cabaret." Well, he didn't say end up saying "cabaret," going instead for the dreaded "old fashioned." I bet that comment could have been prevented with a different outfit because again, poor styling and song choices overshadowed a nearly flawless vocal! She was in the league of a young Streisand when she hit those money notes at the end, I just wish I wasn't focused on that horrid halter vest over the white shirt. Put her in a cute dress and boots and you have a whole different vibe.

I think Gina made a big mistake this week in going with another ballad. The Pretenders song worked last week because it was a different direction for her while remaining true to her rocker roots. Coming out with "Smile" the very next week and sitting on a stool and singing a sweet little standard isn't a move that's going to win her any new votes. She has that big voice, why not put her stamp on something brassy and up-tempo? Remember what Kelly Clarkson did with "Stuff Like That There?" This was a big missed opportunity for Gina. And I was completely distracted by the silver eyeshadow. I like Gina's voice, I like her style (most of the time) but it's obvious the clock is ticking for her. She's got maybe 2-3 weeks more to make a star turn or she's just going to disappear next to Jordin , LaKisha and Melinda's big voices.

Tony Bennett hearts Sanjaya. Yeah, the boy wonder is safe for another week. Actually, I thought this was a personal best for our little friend. He may have been on pitch a whole 20% of the time. I so love how everyone talks about his "charm" and how he's an "entertainer" since they can't find anything else nice to say about his singing anymore. And after his "welcome to the universe of SANJAYA!" comment to Simon, it's possible that Sanjaya may be in on his own joke at this point. And a joke it is.

Haley's legs were out in full force again, this time lovingly exposed courtesy of a (hideous) green sequin minidress. The leg thing is so ridiculous and blatant at this point that even Simon weighed in. This performance was pure Vegas. It was totally something you'd find in one of those lounges you pass in the Excalibur at 3 AM after losing $400 playing Pai Gow and some generic balladeer is singing a Madonna song while you slide your last $20 into the video poker machine at the bar in order to get that last free drink. Haley used to work as a wedding singer in her native San Antonio and you know what? That's exactly what she sounds like. A wedding singer. And there's nothing wrong with that. The world needs wedding singers. Sorry Haley, not everyone is meant to be a pop star. The other girls sing rings around you and your days are numbered. But you have a very pretty face and nice legs! Yeah, I'm sorry sweetie. I know that's not what you wanted to hear.

What a perfect choice. This is what I talk about when I say "star-making performance." That's what makes people vote. LaKisha tore it up and looked fabulous in the process. Loved the lace halter dress. Loved the passionate delivery. Loved the way she phrased the ending. Can't wait to see what she pulls out next week.

This week's Performance Rankings (week of 4/3):

Will be voted off: Phil Stacey

8:38 AM: Dial Idol doesn't give too clear a picture this morning of who will be voted out tonight. It's all too close to call. However, and this is a big shocker, they have 4 of the 5 remaining girls in a statistical tie at the bottom! If their stats are to be believed, Haley Scarnato, Gina Glocksen, LaKisha Jones, and Jordin Sparks are all vulnerable tonight. Melinda Doolittle sits predictably at the stop while a voting surge for Phil Stacey vaulted him into the #2 spot. Sanjaya, Beat-Box Blake and Timber-lite appear to be safe in the middle of the pack.

6:38 PM: The show just aired on the East Coast, I checked the results, and I'm not a happy camper. Gina Glocksen goes home tonight-- before Haley, before Timber-lite, and before SANJAYA. Sweet Jesus. I knew the ballad was a bad move. I'm down to 2-2 in top 12 predictions and seriously thinking beting Bodog's line on Sanjaya finishing in the Top 5. (Yes +110, No -150). More after I've actually seen the show. Tony Bennett was supposed to perform, StB but I'm hearing Michael Buble stepped in as a replacement.
Posted by change100 at 12:02 AM

This may be a dumb question, but did Tony Bennett sing?

I missed it, as usual, thanks for the great re-cap.