American Idol Wednesdays: Is It Jordin's to Lose? 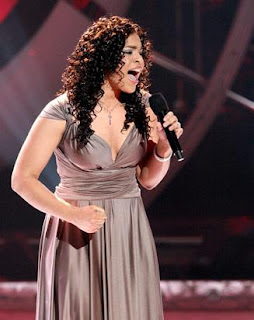 Last night's episode of American Idol marked our first Sanjaya-less week of the season. So, as Simon said after Chris Richardson opened the show, now the competition can really begin. We all have our personal favorites and those we'd rather see doomed to careers on Disney Cruise Lines, but I don't think there's anyone in the top 6 that doesn't deserve to be there. Each has a style, each a musical niche they could occupy as a recording artist. Pop balladeer Jordin. Country Phil. Beat-Box Blake. R&B Soulstresses Melinda and LaKisha. And, of course Timber-lite.

But before the performances got underway, we were treated to another video montage from the hit series "Simon and Seacrest go to Africa" where they play with little black babies and gasp at all the poverty. Seacrest's trucker hats look ridiculous enough within L.A. city limits, so imagine what the background of a third-world shanty-town does for his headwear. The same goes for Simon's $200 man-boob hugging T-shirts. Later on in the show, we learn via another video montage that Simon recently made the *shocking* discovery that there are poor starving people in Los Angeles! And these poor starving people live only 20 minutes from his Beverly Hills home! There's this whole WORLD south of the 10 freeway that he had had yet to discover.

(All kidding and snarkiness aside, what they're doing here by using the American Idol name to help people who desperately need it is a wonderful thing...even though Seacrest's spray-on tan did seem to frighten a few of the malaria babies).

This week's theme was "songs that inspire." I guess they all took it to mean a good sort of inspiration. Not like, songs that inspire rage. Or lust. Or destruction. These were more of the sunny, hopeful, everything's-gonna-be-alright-kum-by-yah variety. Booooo. I guess it can't be up-tempo fun week with all the photo montages of starving children, riiiight?

Chris is the weakest remaining male vocalist. That said, this performance didn't offend me nearly as much as his past efforts. Wanna know why? For once, he didn't sing the entire song through his fucking nose! I thought the outfit worked both for him and the theme-- a hip, relaxed take on the traditional suit-and-tie. But let's keep it real here, dawg. Could I listen to an entire pop album from this guy? Only on a prop bet. But could millions of Middle American mall-loving text-messaging Contempo Casuals-wearing teenage girls? Yeah, I guess. Sort of par for the course when it comes to America's deteriorating taste in pop culture.

Melinda Doolittle: "There Will Come a Day"

This performance had power, control and emotion. Can't ask for more than that. I didn't even like the song that much (ewwww Faith Hill) but to hear her sing it STILL gave me chills. She took a cheesy country recording and put the indelible Melinda stamp on it. And though I never thought Melinda was faking it with her "surprised" look when praise was heaped upon her, I'm glad it has been replaced with a healthy dose of quiet confidence.

SNOOZE-FEST! This performance was stuck in third gear the whole way. No dynamics. No colors. He didn't put his "stamp" on it at all... that's what I was really expecting from him after playing it safe for a few weeks. Seriously, at this stage of the competition, why NOT beat-box "Imagine?" At least people would remember it the next day. I can appreciate what Simon referred to as "sincerity" but yeah... it just wasn't that special. That, and I wanted to turn down the collar on his blazer the entire time.

OK...LaKisha covers an Idol's signature song for the second week in a row? WTF? This was a terrible choice, and it could spell the end for her since both Timber-lite and Phil Stacey both had a good week. Seriously, does this girl listen to any other music besides shitty Top 40 from the last five years? The depth of song choices that are out there for a voice like hers is sick and she decides to try and sing Fantasia on the same stage where Fantasia herself sung this song only three years ago? Not to mention that the song itself sucks ass and it does nothing for her voice. Let this be a lesson to future contestants-- stay away from the Idol covers! They're incredibly difficult to separate from their original artists' televised births as pop stars. Paula was absolutely right for once. I fear the bottom two for LaKisha this week.

This was the best pure vocal we've ever heard from him start to finish. Phil needed to knock it out of the park this week to stay alive and I think he just might have done it. Phil knows he needs the votes, he's not stupid. And now, he has the support of Vote for the Worst, since their boy Sanjaya has moved off American Idol and onto the morning talk-show circuit. I hope that's enough to give our favorite bald tenor one more week in primetime.

Jordin just threw it down and said-- "fuck Melinda, I'm winning this thing." Jordin's stock soared in the competition tonight with this showstopper. She emotionally connected with the music from start to finish, the vocal was impeccable and those high notes were simply chilling. Do you know how hard it is to belt to an F? Simon said it all with this remark-- "that song is about 60 years old. You could have a hit record with that." It's ON America, it's ON!! Jordin just may have won herself the competition with that performance. It reminded me of when Kelly Clarkson did "Natural Woman" and really separated herself from the rest of the pack. Give it up for the Rogers & Hammerstein, America!!

When it comes down to it, I think we're going to see a Melinda-Jordin finale. Both are knockout performers and both could make great records. But who is more marketable? Who is going to feel more at home on TRL and making music videos for a teenage audience? Who is going to sell more copies of Cosmo and Allure with their face on the cover? And who is going to sell concert tickets to white suburban teenagers? I think Jordin wins the marketability competition in a landslide. An attractive, relatable 17-year old girl with a Mariah Carey-esque voice is going to appeal to the Idol record-buying audience more than a 29-year old throwback to Gladys Knight, no matter how phenomenally talented she is.

On tomorrow night's 2-hour results show, get ready for "one of the biggest shocks we've ever had on American Idol." I think that can mean only one thing... Michael Jackson! Heeeeeeheeee heeee! How on EARTH did they convince him to leave the comforts of Bahrain? Will his children be in the audience, wearing shrouds?

And holy motherfucking shit... next week is BONO week?!

This week's Performance Rankings (week of 4/24):

Will be voted off: I'm going LaKisha again. I think I marked her death a week too early.

(Potential Idol spoilers below. If you want to stay completely in the dark until tonight's results show, stop reading now!)

9:05 AM- Ooooh it's gonna be a squeaker! Dial Idol is predicting this morning that only Jordin is 100% safe, and the five remaining contestants are in a statistical tie, with Timber-lite bringing up the rear. Phil Stacey placed second in their tally, less than 1.5 percentage points over LaKisha, Beat-Box Blake, and Melinda. So tonight, we have over half the field vulnerable. These Dial Idol predictions sure aren't what they used to be...

7:53 PM- Usually, I hate that I'm on West Coast time and have to wait the extra three hours for Idol. It's why I haven't live-blogged the show all season, opting instead for recaps (because you'd all be asleep before we even got rolling here). But tonight, I'm so glad I spoiled myself and checked the results because after a 2-hour show that includes a celebrity rendition of "Stayin' Alive" NO ONE GOES HOME! Booooo! What a gyp! Two will be eliminated next week instead. Now I can save these two hours of my life and go play Pai Gow or something and just watch it back on TiVo when I get back to L.A.
Posted by change100 at 12:46 AM