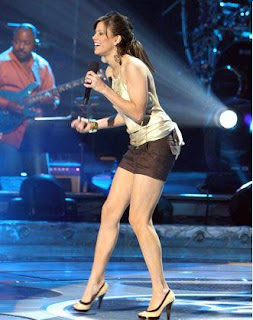 OMG it's J.Lo week! What do you think is the over-under on her appearance fee?

As this week's Idol drew to a close, Showcase offered a great theory about why this was such a weak episode. "Latin songs not sung by actual Latinos are always going to sound like karaoke. I mean, I heard shit like this on the Spirit of New York."

I have to concur, especially having worked on said cruise ship back when I was a 20-year old music theatre student. Tonight, I was having flashbacks every other song to being on that boat, lapping around Manhattan, keeping large parties of corporate douchebags waist deep in Corona and chardonnay and pounding a glass or two myself before having to get onstage and try to
remember all the choreography to various Gloria Estefan tunes.

But I digress... how did our Idols fare?

J.Lo wanted Melinda to bring sexy back. And she decides to rock the little black dress and pearls topped off with a curly wig? On Latin night? "She looks like a GRANDMOTHER" spat Showcase.

This was the first performance where I was a little bored by Melinda. It was very cruise ship. Very open mic night at Don't Tell Mama's. Even Simon, who last week wondered if he would ever have any critisicm for the until-now flawless Melinda, had harsh words to offer.

"Well it had to happen, Melinda. I didn't like it. You appeared much much older than you are, it was very lounge/cabaret."

I have to agree with Cowell, but give the girl a break. This performance was her one misstep thus far in the competition.

Showcase thought "This girl BROUGHT it tonight!" I loved the outfit for the occasion. The long halter-dress silhouette works very well for her body. Though the performance had some personality and more or less entertained me for its duration, I was still left wanting more from her. Where's the girl that blew us away with "I am Telling You" and "Midnight Train to Georgia" and made it look like she wasn't even trying that hard? Those early performances of hers gave me chills. Though Showcase was shocked the judges declared it to be a "safe" choice, I agreed with them in the sense that she picked a fun, popular song without a terribly rangy vocal that was sure to engage an audience. It was a performance that had all the potential to be great, but fell just short.

I don't know what it is about this guy, but hate his voice more and more every time I hear him. I just don't dig it. I hate this song too. It seems like every week I take bong hits and gab with Showcase during Chris' performances. He just doesn't engage me. And this word "contemporary" that is continually bandied about around him? What is so fucking original about a Timber-clone? Open your eyes, people and gawk at the resemblance like everyone else has been doing for the last three months.

Haley Scarnato: "Turn the Beat Around"

This is a very difficult song across the board-- tempo, rhythm, syncopation, lyrics, and a relentless melody that can sit in a tricky spot in a woman's chest voice. I'm VERY surprised Haley went for it because it's so easy to screw this one up. But who was listening to her sing anyway? The shorts are BACK, they are BLACK and paired with a see-through zebra print halter and black stilettos (naturally).

Phil went with the newsboy hat again. I like it. I think it's cute. And I certainly prefer the hat to the glare of 50,000 watts reflecting off his head. This was another great vocal from Phil with absolutely no spark. Yet again, he made another borrrrrring song choice. He got "lifeless" and "flat" again from Simon. No goot. I think Phil will be paying a visit to the bottom three again.

Jordin Sparks: "The Rhythm is Gonna Get You"

OK..of all the tops in the world she picks some bizzare beige wrap blouse-slash-cropped trench coat thing? For the love of all that is holy, PLEASE PLEASE PLEASE fire whomever is dressing this beautiful girl in such hideous outfits! Why isn't she in some fabulous print dress and strappy heels for Latin Night? She should start stealing LaKisha's clothes.

As for her performance, Showcase quipped "It's the SNOOZE CRUISE. This is what I'd hear before dinner on the Lido Deck." I'm with him on this one. She might have the best voice in the competition, but she hasn't hit the bar she set for herself three weeks ago with that stunning performance of "I Who Have Nothing."

Blake Lewis: "I Need to Know"

Randy thought it was the best song choice by a performer that night and it was definitely one of Blake's stronger efforts. I never thought I'd miss the beat-boxing but I do. Still, I don't know why the judges are so in love with this one. He's all right, but never makes me sit up and really watch him. Have they just decided that he's the non-diva they're all getting behind this season? The Melinda/LaKisha/Jordin alternative?

J.Lo liked his song choice and... WAIT A MINUTE, IS THAT A FAKE 'STACHE?! IS THAT MELINDA'S WIG? DOES THAT T-SHIRT HAVE UNICORNS ON IT?!? This was actually one of Sanjaya's better vocals. Which is not saying much. It's probably because the song was in a foreign language. Everything sounds better in a foreign language.

Simon had this to offer: "I couldn't understand a word of it, you sang like a 14-year old, and, I'm going to hate myself for this, it wasn't horrible." I unfortunately have to agree given the bad karaoke turned out by most of the other contestants. At least for this week, Viva la Sanjaya!

All right let's rank 'em up. Here's where I'm at with our eight remaining contestants:

This week's Performance Rankings (week of 4/10):

Fuck if I know: Sanjaya Malakar

Will be voted off: Betting with Haley's legs has worked for the last few weeks, so let's press it one more and go with Phil Stacey again.

9:30 AM: Uh-oh. The Dial Idol predictions do NOT look good. LaKisha and Jordin are tied at the bottom, and the only contestant they declare to be safe is Beat-Box Blake. It could be a seriously ugly night. I knew the old lady trench coat wrap shirt thing wasn't gonna do Jordin any favors.

7:48 PM: For once, America got it right. Haley and her lovely legs were sent packing. Over under on number of months before her inevitable Stuff and Maxim spreads?
Posted by change100 at 12:31 AM

Tis show tires me. The only reason I read this whole post is just because you are so hot.

Sanjaya didn't totally suck this week except for the son-of-a-columbian-drug-lord look.

Timber-lite is in trouble here.

I agree with what eddie said!

I want to see you sing and dance some Estafan in Vegas in June!

Can we get a gratuitous picture of those legs next week? Just because, you know, they are nice to look at.

I have no idea if you're hot or not, I just think you're a good writer.

Did you see the poster for "Lucky You?" The guy has...JK os in his hand. This already worries me. If that's what the producers think is a world-class hand, then that movie is gonna suck. Unless there's some sort of inside message there. I"d buy that, but I doubt movie posters are supposed to be that deep.