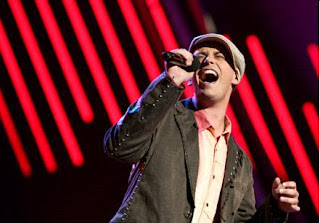 So... I don't really like country music. Can't handle the twang factor. Sure I've delved into plenty of southern rock and rootsy sounds, even a little alt-country here and there, but the mainstream country radio sound is something that has never appealed to this Hollyweird blonde. Martina McBride, an artist that wholly exemplifies this genre I so loathe, mentored our Idols this week. As the show started I feared a total train wreck, as there isn't a single country singer in the bunch. That, and I had to weather the twang alone for 60 straight minutes while Pauly hid in my room writing.

If there's a headline for this week's episode, we should remember it as the one where we finally figured out what kind of singer the golden-voiced but "personality"-challenged Phil Stacey wants to be. Here's how our top 7 fared:

Phil engaged the audience better than he ever has with this number originally performed by Nicole Kidman's just-out-of-rehab husband Keith Urban. It certainly showed off his voice well and Phil finally seemed to connect with the material he was performing. "Now I know Phil Stacey!" exclaimed Randy. Tell me something... where was Country Phil 8 weeks ago? If this is his genre, couldn't he have put a stylistic twist on some of his earlier song choices? Who knows. I loved what he did tonight, but I wish I wasn't so distracted by those bloody awful silver stripes on his black shirt. Uber-ghey.

Jordin has returned to the ballads after two weeks of tepidly received uptempos. This is clearly where she's the most skilled and comfortable. She has no problem showing off her voice and this song did it well. Jordin is blessed with presence enough to just stand there, sing, and command attention. Can the rest of the lot, excluding Melinda say the same? Someone must have bound and gagged whomever was putting her in those old lady outfits, because she showed much better styling choices this week. Loved the sari print dress and the hoop earrings. Simon told Jordin that he believes she can win. And so do I, if she keeps making solid choices like she did this week.

Sanjaya Malakar: "Something to Talk About"

OMG I totally didn't realize it was also gang bandana week!! Does red mean he's a Blood or a Crip? Let's set aside for a moment the fact that Sanjaya showed up at Country Week dressed like a member of Color Me Badd. This was perhaps the most hideous vocal he has turned out thus far. He had horrible phrasing and an even worse tone. Simon went to town on the curry-flavored crooner declaring the performance "as bad as anything we see at the beginning of American Idol.... a ridiculous choice of song." Seriously... what possessed this poor boy of questionable sexuailty and weak voice to cover perhaps the most overdone female pop-country tune out there? I have a feeling about this week for Sanjaya. Something tells me we might finally be rid of him and he'll be free to embark on the William Hung "15-minutes of fame over 5 years" tour.

Interesting... is this the first time an Idol contestant has covered an Idol winner's song? Did some chick cover Kelly Clarkson last year? I don't remember. You're gonna have to help me out with that one. LaKisha started out well with her interpretation of the verse, but badly oversung the chorus. The high notes were just outside of where she's comfortable and came out juuuust a bit sharp. And what's with the nightmare prom dress they put her in? I think my mom bought that dress for me at South Coast Plaza before my 9th grade Christmas dance. LaKisha is fading here and it's a shame because she certainly has the voice to win it. If Sanjaya doesn't go, this could very well be her swan song.

Ughh. I'm never gonna like his voice, especially on a Rascal Flats song. So thin. So nasal. So whiny. I tuned most of it out AGAIN. Chris just can't hold my attention. Randy thought it was emotionless. That's right judges. You can't heap the "oh-my-God its so contemporary and fabulous praise" on this performance. He'll skate by again this week. Teenage girls love him. But tell me this, with rehearsals and shooting Ford commercials and learning choreography, where the hell does he find the time to date that girl from The Hills?

Melinda Doolittle: "Trouble is a Woman"

I forgot that Melinda was from Nashville. She can bring the country sound in a blues voice. Does it matter that I didn't like the song? That it was a twangy piece of shit? Melinda could sing a fucking polka at this point and I'd listen. For her, I thought it was solid but not standout. But for the competition, she's undeniably the one the rest are chasing. Only Jordin is nipping at her heels vocally, but doesn't share the momentum and popularity Melinda is enjoying at this stage of the competition. She'll continue to cruise to the finals.

I guess it was an OK song for him. I've heard the Ryan Adams version of it before. It's nothing challenging or vocally thrilling. But the kid has this cool vibe everyone's digging. Everyone but me I suppose. I will say this for him. At least he carried off the argyle vest without looking like a total douchebag.

This week's Performance Rankings (week of 4/17):

I really hope he gets votes because this was by far his best week: Phil Stacey

Will be voted off: God I hope it's Sanjaya but my gut's saying LaKisha!

2:38 PM - According to the Dial Idol-ers, it's gonna be a squeaker!! Could be LaKisha, could be Sanjaya (pleeeeeease!) could be Beat-Box Blake? Interestingly, their numbers show a surge for Phil Stacey, who is the only contestant they're proclaiming to be "safe" this week as well as for Jordin Sparks (weeee!). We'll know for sure in only a few hours... Pauly and I were just driving back from the Grove and saw the audience lining up for the results show.

7:18 PM - America won't have Sanjaya Malakar to kick around anymore!! Pauly gave me 2-1 that Sanjaya would bite it this week and I foolishly took the bet. Now I owe him $40! Boooooo! I can't pick for shit when it come to who gets kicked off (am I 2-4 now?). But at least our long national nightmare is finally over and the competition can really begin.
Posted by change100 at 9:07 PM

Prior to last year, Kelly Clarkson had blocked her songs from being performed on American Idol (just about any artist can do that). But last year, some contestants did sing her material.

OMG Sanjaya brought it the week.

Randy was clearly stunned at his performance, Simon got to completely unload and not even Paula could say anything nice.

Dave Della Terza was on Late Show with David Letterman last night. His contention was that his efforts to keep Sanjaya on show is helping keep ratings up.

Thanks, CJ!! I had a feeling someone did a Clarkson song last year but couldn't remember exactly.

Bayne- I think the Sanjaya debacle has definitely been a good publicity machine for the show, keeping it in water cooler conversation, etc. However, ratings are actually down this season-- almost 10% from this time last year.

Melinda Doolittle will released her first album soon. Keep you update at www.melindasbackups.com