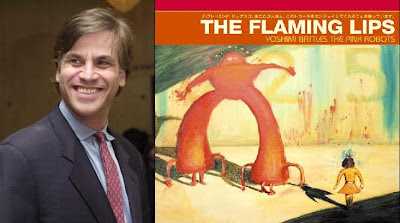 Entertainment Weekly is reporting that Aaron Sorkin will pen an adaptation of the Flaming Lips' 2002 album Yoshimi Battles the Pink Robots for the Broadway stage. Des McAnuff, who recently directed the new Sorkin play The Farnsworth Invention at the LaJolla Playhouse will helm the production. A premiere is likely years off.

This is not some headline I dreamed up in a drug-induced haze. Really.

According to Flaming Lips frontman Wayne Coyne, Sorkin got hooked on the idea just recently, when he listened to the Yoshimi album while driving from San Diego to Los Angeles. He signed onto the project the next day.

No plot details are available yet, but Coyne had this to say about the album's story:

'There's the real world and then there's this fantastical world,'' explains Coyne. ''This girl, the Yoshimi character, is dying of something. And these two guys are battling to come visit her in the hospital. And as one of the boyfriends envisions trying to save the girl, he enters this other dimension where Yoshimi is this Japanese warrior and the pink robots are an incarnation of her disease. It's almost like the disease has to win in order for her soul to survive. Or something like that.''

Little Japanese girls fighting robots that exist in her suboncious as a metaphoric manifestation of her disease? Pass the 'shrooms, Aaron...

Speaking of Hollywood potheads, check out this photographic tribute to A-list tokers including Cameron Diaz, Drew Barrymore, Paris Hilton, Lindsay Lohan, and the original Idol, Kelly Clarkson. And this story claims that Luke Perry has turned to dealing weed since his post-90210 career has dried up. I thought I had bought drugs from every C-list wannabe from La Cienega to Highland. Guess I missed one!

We all know by now that Keith Richards may or may not have snorted his dad's ashes with a little blow. But did you know how big a brick Disney's spin-masters are shitting over it since Richards was supposed to be trotted out to junkets and premieres only a few weeks from now to promote Pirates of the Carribean 3?

I love surfing through Bodog's TV and Film Props. Back at my old job, I used to occasionally book action from my interns on these wagers. This week, I'm liking these three lines:

Ian Ziering to win "Dancing With the Stars": He has a real shot at it and I think the line is a bargain at 5-1.

American Idol 6 winner to be UNDER 24: If you're a Jordin Sparks fan and see her pulling through to the finals, I'd think about this one at +375.

Rosie O'Donnell WILL NOT leave "The View" in 2007: I think she'll last at least the rest of the year the way that show's ratings are climbing. A no-brainer at +150.

The line on "Sanjaya to finish in the American Idol top 5" looked better a few days ago, now it's essentially a pick'em.

In other Sanjaya-related news, he was offered a lifetime supply of KFC to sport a bowl cut on an episode of American Idol and that idiot on MySpace finally stopped starving herself. And Showcase's whole theory about all the outsourced Indian call-center employees robo-voting for Sanjaya has now been officially debunked.

Finally there's some quality scripted television to be found this weekend with the return of The Sopranos and Entourage! Though I vividly remember where we left off with Vince and the boys (they fired Ari) I can't for the life of me remember what was going on last season on The Sopranos (except for gay Vito and Johnnycakes. I love you Johnnycakes!). Thank God for HBO On Demand.

Enjoy your weekends, people. And for those who believe in the whole Jesus thing, Happy Easter. I'll probably be spending Sunday at my parents' house eating Honeybaked Ham and avoiding church attendance as my father sighs at my lapsed Catholicism.
Posted by change100 at 1:02 AM

I don't know about the Rosie one. Her contract is supposedly up in May and she wants a lot to stay.

If it weren't for chuch picnics. smokers and Drinking for Jesus, I could never claim with a straight face that I go to church.

I can't comment on your above entry for some reason. From one high-school drama hag to another...the lesbians from next door are from Falsettoland - ship it!