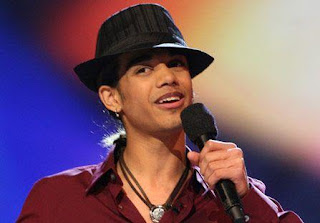 It is a SINGING competition, people.

But that has never mattered to the unwashed teenage masses that are largely responsible for crowning our "Idols." Well, them and the RoboVoters, the Dial Idolers, the re-dial monkeys, whatever you want to call them. Blocs of voters throw themselves behind a particular contestant for whatever reason (he's cute, he's from my home state, she's a Christian, she's white and blonde).

Last week, the American public made at least two mistakes. While there's no doubt that Leslie Hunt would have bit the dust in the next couple of weeks, she at least deserved a bit more screen time than what she ended up with. I liked her bluesy alto and she was just starting to hit her stride when it came to song choices. At least the public got it right when it came to the ouster of Alania Alexander after shouting her way through that Dixie Chicks song we're all so fucking sick of.

The public also chose to save Antonella Barba, who needed to be thrown out of the competition the second those naughty photos hit the internet. It just goes to show you that... surprise... there are HUGE double standards in play on IDOL (at FOX, in Hollywood itself). When a fat black chick takes off her top to make a few bucks and put herself through college, it's not cool with the network suits, but when a skinny Long Island girl shows her titties with a come hither look and mugs for the camera while holding a dildo... well that's a ratings bonanza AND filthy- sexy.

We'll see the girls tonight, but yesterday, the guys took the stage. I hate almost all of them. And they seriously sucked in this episode. Let's start with Sanjaya, who seemingly has the entire sub-continent of India robo-voting their hearts out, making sure he'll be around to torture us with his curry-flavored cabaret even after last week's appallingly gay-even-for-me rendition of Irving Berlin's "Steppin' Out." Tonight he was just as awkward and off-key with his rendition of John Mayer's "Waiting on the World to Change" (another song I could go the rest of my life without hearing again). There was so much product in his hair I could smell the glossing serum from here. And the weird gay hula thing? Mommy. Help. Save me.


Everyone seems to love Blake Lewis, but dawg, I just don't get it. OK, the beatbox gimmick makes him stand out, but it can't his his B- vocals. "Current" doesn't always mean "good," Randy. Sundance Head (not related to the Human Head) gave us an OK version of Pearl Jam's "Jeremy." While I appreciated the vibe and the song choice, I used the Sundance's airtime to take a bong hit with Showcase. Whatever the hell that thing Chris Richardson sang was far too big a song for him and had pitch problems all over the place. That and he sang through his fuckin' nose.

Jared Cotter took on Stevie Wonder somewhat successfully. His vocal was nice enough to buy him another week in competition though I agree with Simon that there was no "wow factor." Showcase took issues with his fashion choices. "A black man should never wear argyle" he deadpanned. Valley Boy backup singer Brandon Rogers? Snooze-fest. He was trying so hard it hurt to look at him, and Simon was of course correct about his song's total lack of a hook.

Next was the Phil Stacy debacle. Of all the song choices out there, why why why LeeAnn Rimes? The only thing worse than his sharp high notes was his blush job. Way more mortician than sun-kissed glow.

Chris Singh closed the show and gave the only halfway decent performance all night. He wins the dubious honor of being the only guy I actually like on this show. He had me from "I want to make David Hasselhoff cry." Those lush, sexy curls mesmerize me and I love his voice.

Tonight, the girls return and hopefully we'll be seeing the last performances from Haley Scarnato and Slutface Barba. Wednesday is the Idol night really worth watching. I can't wait to see what Lakisha Jones, Melinda Doolittle, Stephanie Edwards and Jordin Sparks pull out.

My predictions on which guys will leave us: Sanjaya and Jared.
Posted by change100 at 10:19 PM

I turned to Mrs. Doog during his performance and said, "Look, honey! Carlton Banks hit a growth spurt!"

And you are right about the beat-boxer. I like his style and the newer song choices, but that doesn't make up for his average-at-best vocals.

And hit up totally gay Yahoo IM Idol chat with us tonight!

gert said...
This comment has been removed by a blog administrator.
4:38 AM