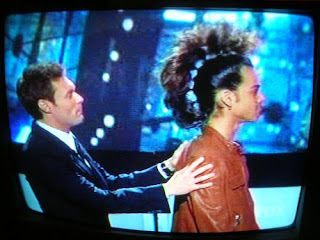 American Idol may be the top-rated program on television, but even those at the top slip sometimes. AI's ratings are down 10% from the same point in the competition last season. This translates into about 3 million fewer viewers per Tuesday performance show. Is Sanjaya a lack of talent to blame for the falling ratings? Here's the party line courtesy of Idol exec. producer Nigel Lythgoe:

"To be honest about it, people are saying this is not our greatest year for talent," Lythgoe said. "I don't necessarily agree with them...[But] if it is a bad year for talent—and we'll find out over the next few weeks—then we always do watch a ratings drop of between 3-4 percent."

"Even if we lost 50 percent of our audience, we'd still be in the top three shows in the country," Lythgoe said.

Here's another big surprise. The crying little girl on Idol was pretty much a fucking network plant. Doesn't exploitation rock? You get to be famous for a week and be on TV and do all sorts of interviews for free! Dance, monkey dance!

Well, onto the important shit. It was Gwen Stefani Week, people! In this episode the top 10 performed songs from the No Doubt catalog as well as selections from artists that inspire Stefani including the Police, Donna Summer, and The Cure. My first thought when I found out the theme was that we'd better get something good from Gina Glocksen, because this genre is squarely in her wheelhouse. Here's how they did.

It was sort of unfortunate LaKisha had to go first, because I liked this performance even more when I watched it back a second time. She's leagues above most of these kids. It was a great choice for her to return to an uptempo number and she turned out an excellent vocal. Highs, lows, color, emotion, love it. LaKisha's back after last week's diamond fiasco. I dug the outfit and the boots too!

Chris Sligh: "Every Little Thing She Does is Magic"

Ooooof, we have some rhythm problems here. The vocal was OK, but at no point did I sit up in my chair and go "wow." NO money notes, no impressive runs, just kinda "eh." I really liked this guy a few weeks ago. What happened? This was a good song choice for him, actually a really great song choice and it sat well in his voice. But he just couldn't get it done in terms of pitch and delivery. An iffy performance like this isn't going to hack it at this point and it leaves him very vulnerable this week.

Gina Glocksen: "I'll Stand By You"

I was just saying to Showcase last week that Gina really needed to channel Chrissie Hynde. The song sat perfectly in her range and gave her the opportunity to go for the big notes and show off her voice. I'm glad Gina reminded us that she can sing after the disappointing last few weeks she's had. But despite her great vocal, that outfit was tragedy in motion. Gina is an attractive girl, but come on, miniskirt plus WAY-too-tight-for-her satin corset plus fishnets plus knee high boots with fucking skulls on them is gonna make anyone look like a cheap hooker. More clothes, less skank please. You're better than that, sweetheart.

My jaw is on the floor. Seriously, this poor kid has become an unwitting national embarrassment. He simply doesn't belong there, and as I watch Sanjaya react to rendering three judges that are never at a loss for words speechless yet again, I think that even he knows at this point that he should have been out weeks ago and that it's all just some sad joke. Please, for the love of all that is holy, put this poor kid out of his misery and give him a shot at recovering from this unfortunate 15 minutes of fame and having a normal life. I mean, what utterly brain-dead stylist agreed to put that thing on his head? That tragic faux-hawk mess is all his REAL HAIR, people. NOT extensions or some sort of fall. Poor Sanjaya forgot the words, was totally off pitch, and made a terrible song choice. VFTW must be jizzing their pants.

In the words of Simon, "I don't think it matters anymore what we say actually... I think you're in your own universe and if people like you, good luck."

Another leg-baring outfit for Ms. Scarnato this week, this time a black minidress with a lower-back cut-out. Clearly Haley understands her assets and what kept her off the chopping block last week. I really don't remember much about her performance. It was that forgettable. Sorta breathy, un-special vocals one might hear on LITE-FM. Or in a wedding band. But that does not a pop star make. Eh... next! Just watch. I bet her legs will get her through again.

Phil Stacey: "Every Breath You Take"

Yes! Hat saves audience from gleaming white head! Vocally, I think Phil is the best guy remaining in the competition. He did the song justice and got in some of those glorious high notes there at the end. I just wish there was something a little more interesting about him. Something more charismatic. I just don't understand who he is yet as a performer and artist and I'm not sure he does either. But there's such potential there and I think this effort will at least earn him another week on the show.

Weeeeeeee! Melinda dances! Melinda sings! Melinda has NO NECK and that hideous go-go meets 1987 outfit did nothing but accentuate it. But goddamn if that woman doesn't just blow the doors off the place every single week. The judges are right-- it's that effortless connection she has with the music and lyrics she's interpreting that give her that edge over the others. Everyone else at some time or another looks like they're trying. On her, I never see it. Can't wait to see what she brings next week.

The intro was like a smooth jazz nightmare. I was totally bored throughout. I know people like him but I just don't get this guy. This was Blake's first performance sans beatboxing and it really highlighted for me what a sub-par vocalist he is compared with many of the others. Without the gimmick, he's just ordinary and I completely disagree with the judges that he's the strongest guy. And.. we have yet another hideous outfit. It's as if he took one of Grubby's Cosby-era sweaters, cut it apart, and had Paula Abdul sew it back together by hand while faded on vodka and percoset.

Honestly, is some blind kooky grandmother with a flask of Seagram's in her pocketbook dressing these kids tonight? Putting a curvy girl in a pleated skirt is just fundamentally cruel. And that hoodie that looked like it was made out of some horrid picnic tablecloth? Poor Jordin looked like some junior high school tragedy straight out of the Delia's catalog. She also handicapped herself by choosing a song that at least for me is VERY hard to separate from Gwen Stefani. Jordin definitely took last week's note about doing something more young and fun and twisted the dial ALL the way in the other direction. With all the terrible styling choices it's really a tribute to her talent that it was one of the better performances of the night. She delivered pretty much a flawless vocal and showed a spunky, energetic side to herself. Viva la Jordin! But burn that hoodie NOW and consider keying the car of whomever convinced you to wear it.

Gwen told him not to oversing the song-- a good note. And while the first half was standard Timber-lite nasaly whine, the second half surprised me once he hit the chorus and made some nice runs at the end. Timber-lite's voice is actually halfway decent when it's supported. I think he's still at the back of the pack, though and likely still splitting a lot of his votes with Blake. Methinks he could be sweating the bottom two again this week.

Here's where I sit with the contestants thus far...

This week's Performance Rankings (week of 3/27):

My pick to leave us this week: Chris Sligh

(potential Idol spoilers below... if you want to stay completely in the dark until tonight, stop reading)

10:20 AM : If the robo-voters over at Dial Idol are to be believed (Showcase and I always take their predictions with a grain of salt), the three contestants that are the most vulnerable for elimination tonight are... Chris Sligh, Haley Scarnato, and Jordin Sparks. Melinda, LaKisha, and Sanjaya were among the top vote-getters as usual, while Timber-lite joined them in the safe zone as well this week. Gina, Phil and Beat-Box Blake also look to have enough votes to put them through.

I'm seriously crossing my fingers for Jordin to survive. This girl has serious talent and I don't know if I can handle another Idol travesty that would surely be spoken of in the same manner as Jennifer Hudson's 7th place elimination in season three.

6:32 PM: I just checked the official Idol message boards (the results show just aired on the East Coast) and it looks like our boy from G-Vegas, Chris Sligh, will be leaving us this week. Haley, Phil and Chris were the bottom three, Jordin and Gina were thankfully safe and the Sanjaya train keeps on running. More thoughts on the show once I've actually seen it!
Posted by change100 at 12:13 AM

I believe everything I know about this season of AI I got from you.

I saw the "crying girl" on ET last night as I was trying to fall asleep. They showed her getting the "Hollywood" treatment. Nails, makeup, clothes. Great, let's tart up the crying girl.

Crying girl says to the camera "I am getting ready for you Sanjaya". The creepy part was a lady holding up a slinky top and asking "Would Sanjaya like this?" Uh..she is 13 years old! Are we trying to encourage pedophilia nowadays?!? Just downright wrong.

Can I revise my dead pool picks and replace Seacrest for Sanjaya?

I may have to vote for Sanjaya.

I think he has opted for the William Huang(sp?) career arc where he knows he sucks and now is just going over the top to stun the judges.

how is it that I have never watched this show, never cared at all about it, yet I still read your reviews?!?!

Thank you for the laughs. And that hair is atrocious.

Nice summary. I'm cracking up that both of us do summaries for our favorite shows. Do we have too much time on our hands? Good possibility.

Great seeing you in Vegas.