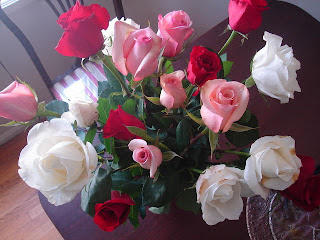 I'm spoiled living in Los Angeles for many reasons, the biggest of all being that we hardly ever have to deal with weather. Yeah it occasionally rains here and sometimes that can make the surrounding mountains slide and try to fall on us, but for the most part, we get off terribly easy.

Not so for most of you today, as I watch televised images of snow burying the eastern half of the country and hundreds of people sitting around airports, waiting in vain for their flights to get off the ground.

Today, Pauly was one of them. He arrived at JFK this morning only to find out that his flight to L.A. had been cancelled, the rest of the flights for the day had a 90% chance of also being cancelled, and his best bet for getting out of New York at all was to re-book his ticket for Friday morning. Our Valentines' plans, which included him whisking me off to a beautiful room at the Standard Hotel in Hollywood for two days, were kaput, and the bastards at the hotel wouldn't even refund him for the first night of the room, forcing him to eat half the cost of his extravigant, thoughtful, and undeniably romantic Valentines' Day plan for us.

After having his plans completely ruined, poor guy then had to schlep home from Howard Beach to the Bronx via subway since the cab lines were completely out of control. I don't know how long that took him, but even in good weather it would be a 2 1/2 hour trek. Talk about a bad fuckin' beat.

A force majeure may have separated us for Valentine's Day, but I still have these beautiful roses to look at tonight to remind me of all the wonderful things I am blessed with in life, most of all the man who sent them. A man who ventured out into the Great Blizzard of 2007 and probably re-aggravated his waning head-cold just to try and see me for this silly little commercial holiday. I also have these decadent chocolate-covered strawberries that I made to snack on now, and a quiet Showcase-free night in my apartment to use to write.

OK... What's the deal ?? I am a loyal fan of Tao of Poker and have met Pauly several times at the WSOP in Vegas. I've been reading about you in his blog and about him in yours a LOT lately. (I've been reading your blog a little over a year)... OK I really wanted to say GREAT !!! I think Pauly has found someone he genuinely cares for and hopefully vice versa. Good luck and my best wishes..Tell Pauly I said HI if he makes it to LA..... Lonnie

sorry to hear your plans are delayed...but it will mean more when you see each other Friday...enjoy your time together...soul mates are rare

Well more proof, if any was needed, that I am just about as dense as they come! I had no idea you two were an item.

Congrats, and hope the weather gives all of us a break soon.