Brandi Hawbaker: Back on the Pole 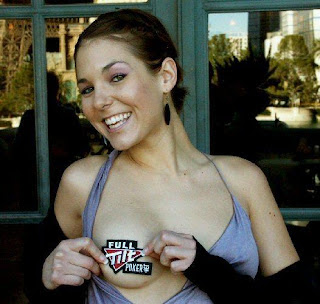 Vegas strip club connoisseurs, rejoice. Penis-on-back victim and reluctant huggler Brandi Hawbaker is back on the pole, performing at the Spearmint Rhino in Las Vegas, as grinding the $2-5 NL at Bellagio isn't bringing her the sort of cash flow she needs. In her own words, she "made more money in one night than (she's) ever made at any job in an entire week" though early reports of her lap-dancing skills reveal that, well... she likes to bite. In the words of one of her "customers":

It started out pretty normal.....then all of a sudden, I feel her teeth in my chest. Not that hard at first, so she continued the dance. But then before long, CHOMP. A bite big enough that my man boob couldn't keep from reacting. I'm thinking "I may not be that familiar with this kind of thing, but I'm pretty sure this is more like expensive VIP back room treatment." We laughed about it and she explained that the situation was actually turning her on and that she "likes to hurt and be hurt"

Apparently that involved a late-night snack on my flesh!

More sordid stories about this poor trainwreck of a girl can be found on the Neverwin Poker forums, including her bizarre obsession with the very married WSOP Thriller-dancer Bryan Micon.
Posted by change100 at 10:44 AM

I wonder if being poked in the back repeatedly with a blunt, hard object qualifies under Brandy's "likes to hurt and be hurt" fetish. If so, The Captain clearly did nothing wrong.

And for the record, I would gladly go to the Rhino for this train wreck.