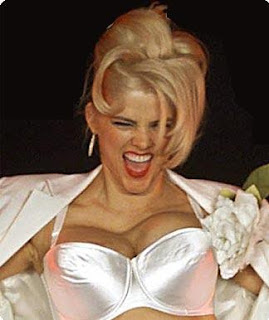 Holy shit-- Anna Nicole Smith is dead! The former model and TrimSpa spokeswoman was found unresponsive in her hotel room at the Seminole Hard Rock Hotel & Casino and pronounced dead on arrival at a hospital in Hollywood, Florida. Her 20-year old son, Daniel died in the Bahamas only 4 1/2 months ago due to a lethal combination of Lexapro, Zoloft and Methadone, three days after Anna gave birth to her daughter, Dannilynn. We're still not sure who Dannilynn's father is-- could be Anna's ex, photographer Larry Birkhead, or it could be that creepy lawyer-turned-"husband" of hers, Howard K. Stern.

The "Breaking News" coverage of Smith's death on CNN has yet to use the word "overdose," but that's what everyone (including me) seems to be thinking. The Defamer loves the CNN coverage so much they're actually live blogging it.

Showcase just offered to drive the both of us up La Cienega to lay some flowers in her honor front of Bobby Trendy's store. Pink ones, of course.

An autopsy will be performed, so it'll probably be a few days before we know what happened. In the meantime, let us remember Anna how she was in life: zany, medicated, bubbly, and hopelessly inarticulate. Viva la TrimSpa, baby!

2:20 PM-- Larry King makes first utterance of the word "drugs" in the same sentence as the words "death" and "Anna Nicole." It also looks like there will be a legal battle royale over the still-disputed $474 million oil fortune of Smith's dead husband. Dannilynn could be a very wealthy little girl. But who's her daddy? Evidently that photographer dude has already filed for custody of Dannilynn. Whatta mess.

I also just noticed that Grubette got herself a point in F-Train's dead pool for her pick. She is tied for first with Drizz, who picked Barbaro, and someone named Mary! (with an exclamation! point!) who must be a freakin' psychic because she took Yvonne DeCarlo.
Posted by change100 at 1:31 PM

You know TrimSpa stock just took a nosedive...
Please oh please take Showcase up on the offer and leave a yellow rose from me. I just loved that crazy little Texas girl.

The Tao of Poker is printing unconfirmed rumors that Michalski is, in fact the father.

Can't believe I missed Anna Nicole in the death pool :(