It's just like me to be at or near the chiplead for an entire tournament and totally blow it around the bubble. That's me. No other poker ailment is more "me" than that. Witness the following finishes from this weekend:

So deep, every single time. So little money to show for it. So trying to be more aggressive to make the bigger money and not play for cashes. So not working. At least I can say I've never finished worse than 24th in one of those 10-table SNGs. The players in them are so terrible, but the ante-less structure morphs the tourney into a stall-fest crapshoot near the bubble where the average stack might be 7 or 8 BB. To counteract it, I play those bubble situations more aggressively than usual, because everyone is just trying to survive. It's when the bubble bursts and I finally get my money in ahead when I've been losing. AK vs AQ and a Q on the flop, and such. So it goes.

I contemplate this question, as of late, with regard to my late-stage MTT game: Am I just not putting myself in enough positions to suck out?

I was pretty pissed not to cash the WPBT H.O.R.S.E. event, because I did a lot to prepare for it, including playing micro-limit stud and stud 8 on Poker Stars and running two warm-up tourneys (the aforementioned $5 one and a Full Tilt freeroll) beforehand. I was happy to see Pauly cash, though, since he was hands-down the best all-around player on the final table. Pauly plays stud. Most of us are like, "uh, is that the one with the up-cards?" Mean Gene totally rocked the tourney and finished 2nd. Thanks to Byron for hosting.

The $11K was also a disappointing affair for me, though Otis and I both managed to at least cash. During those critical high blind levels in the third hour (300-600/75 through 1,000-2000/100) I caught AT twice and KJ once, only to be met with a raise and a reraise before it was my chance to act. With my sort of stack, they were hands I'd have loved to push with, but I folded all three times. Of course it was the correct fold every time, though I would have massively sucked out in all three hands and tripled my stack. Left with less than 10 BB I picked up A-A and got no callers. I picked up A-K and got no callers. I picked up Q-Q and got no callers. I just couldn't double up. Ultimately, I pushed all-in from MP for about 5 BB with 10-10 (about 10K). The chipleader (on my immediate left, who had over 80K behind) flat-called and it folded to the BB (2nd in chips, about 60K behind) who pushed all-in. I knew I was doomed at this point, but I literally jumped out of my seat when the flat-caller OVERCALLED THE RERAISE and turned over 8-8. The BB had Q-Q, and an 8 on the river rewarded the mind behind the worst NLHE play I've seen in months with a 130K pot.

Is it just me, or are these Full Tilt Guaranteeds not what they used to be?

It was also a day of high hands that yielded nothing in terms of monetary gain or bankroll growth. Here's the quad aces I made in the H.O.R.S.E. freeroll when I was trying to get knocked out so I could take a shower: 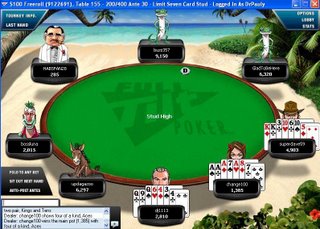 And here is the steel wheel I made in the $11K en route to el busto: 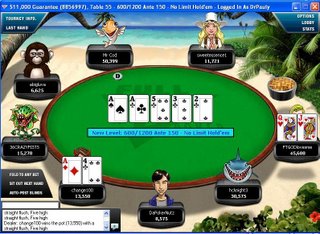 At least I cooked myself the most scrumptious dinner ever--NY steak, cajun-spiced scrambled eggs, rosemary-onion potatoes and buttermilk biscuits with fresh O.J-- which I devoured during the first three levels of the WPBT event. 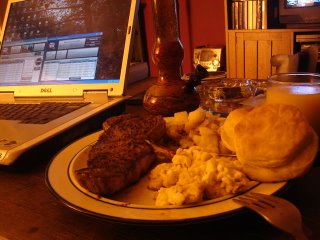 Lastly, have you guys seen the new Bodog TV ad with Jamie Gold? The first time I saw it, I was pretty high and totally laughed out loud at the image of Gold stepping out of a limo, his thinning, cowlick-prone hair begging to be concealed beneath a baseball cap once again, a plasiticine six-foot tall model leading him inside with fuck-me eyes. Give me a fucking break. In the real Hollywood, those kind of girls are inviting that kind of guy inside only if he has either (a) pre-paid or (b) just got a TV series greenlit. Hilarious stuff. I'm surprised no one has You Tubed it yet.
Posted by change100 at 8:34 PM

The pic of the food has a bong and a karaoke machine in the background. Nice work.

"I was happy to see Pauly cash, though, since he was hands-down the best all-around player on the final table."

Hey! Just because that statement is true is no reason to say it out loud!

I know what I'm having for dinner tonight!

Eh, who am I kidding. It'll be left-over pizza again.

Good post, and VERY good blog. Very entertaining...I'd love to do some hash hits with you some time. Take care Change100.