"You know, if Starbucks opened up a chain of hash bars in America, I'd be hopelessly addicted." - Pauly

Halftime was a great idea. After an entire afternoon of power smoking, the food recharged our bodies and parted the clouds of our addled brains. After polishing off some frites with mayo (sweeter and allegedly less fatty than the American version), we turned off Damrak and headed down a twisty alley to my favorite stop on the hash bar circuit, the 420 Cafe. If the 420 Cafe existed in the greater Beverly Hills adjacent area, I'd set up shop/move in there to an extent that would likely require the permission of the management. Not only could I write there during the day, but I'd be able to do so while simultaneously enjoying my favorite cannabis and guzzling down copious amounts of caffeine. Pretty much what I do in my living room most days, only in a more social, gently-lit locale, complete with a long, antique oak bar tended by effortlessly chic Dutch girls who poured 1.80 half-pints of Amstel to a friendly, international clientele.

Pauly bought us a gram of NYC Diesel at the counter and ordered up a balloon for me, as I grabbed us a low corner table in the back. I watched as the British hippie guy behind the counter attached a plastic bag to a vaporizing device called "The Volcano" and inserted a nug of the weed into a little chamber. As the weed vaporized, the balloon filled with the resulting smoke. It's a clean, intense high and actually much easier on your lungs since you're only inhaling the pure THC, not the burned-up stuff.

After an hour, we took a stroll toward the Leiseplein Square area and made our 7th stop at Dampkring. With it's dark, trippy interior and notoriety from appearing as a location in Ocean's Twelve, Dampkring makes all the travel guides and was completely packed. Pauly nabbed a gram of our new favorite strain, Buddha's Sister, while I watched Damon, Clooney, and Pitt's coffeeshop scene play on a loop on two flat screen TVs behind me. I loved the vibe of the place, but there was literally nowhere to sit. We smoked a bowl in the center of the room, nestled against a pillar that looked like a mushroom stem opening up on the ceiling before deciding to move on to our next destination.

The Bulldog in Leiseplein Square was the site of several matches in our roving international game of Chinese Poker. I'd done much better there than at the Pink Floyd, where I think I must have dropped at least 30 points over the course of the trip. We sat out on the covered porch, next to a threesome of American fortysomethings who had not toked up in the last decade or so (and couldn't stop talking about it). We smoked two joints of the Bulldog Bio in the time it took them to get through a half , and they stumbled out shortly before we did. Pauly had been eyeing the Haagen-Dazs across the street and we succumbed to the munchies by ordering two scoops of exquisite Belgian chocolate ice cream.

"I just got an erection," Pauly said, as he took his first bite.

From the Bulldog we took a walk down one of the side streets looking for a new place to try and ended up at the Rokery. More club than coffeeshop, Rokery's interior is Euro-castle meets Far-East temple. Tall, while pillar candles and blue stained-glass hanging lamps glowed against the bar at it's center, while Hindu designs and paintings cover the walls. Nearly every table was packed and a live D.J. spun mellow house music for the inebriated crowd. We purchased a gram of one of Pauly's favorite strains, Sour Diesel. It's always high on his request list when we send Showcase out to the medical pot stores in L.A. for provisions.

From the clubby Rokery, we started heading back in the general direction of our hotel and made a stop at La Canna on Nieuwendijk. We'd already clocked in some hours at La Canna on our first day in the 'Dam, when we had 5 mid-morning hours to kill before we could check in to our hotel. Spread over three floors with food, bar, and cannabis options, at that time I mentally dubbed La Canna the "TGIFridays" of hash bars. It was a little overpriced, full of tourists, and had an entire floor devoted to pool tables. At night, however, the entire place transformed. When we arrived, Pauly grabbed a table and I headed for the third floor to hit the WC. Dozens of Dutch African men were crowded around the pool tables, where a rather competitive billiards match was coming to a close. Half the crowd looked pleased at the result. The other half did not. We smoked a quick joint and decided to move on to hash bar #11. As we exited the place, a fight broke out on the street in front of it.

Down the street, we settled into a table the Cafe Kroon, another establishment we had visited on Day 1 of our trip. The Kroon was home to a sweet, pertpetually stoned gray cat, who contantly slept next to the scale used to weigh out the weed. The cat was in the same position we had seen him in days earlier, curled up on the bar, oblivious to the hip-hop blaring through the speakers and the smoke swirling through the air. We bought a small bag of AK-47 and burned through a joint while a group of Iranian guys remained deep in discussion around the cafe's small bar.

Our 12th and final stop of the day was the Kadinsky Cafe, a tiny little place tucked into an alley. Pauly said he wanted to stop off there since it was named after one of his favorite painters (Kandinsky), though I had to gently point out to him that there was only one "N" in "Kadinsky." We were so high by this point, I'm not sure that even registered with him. We got a 7 euro bag of the Kadinsky special-- super skunk-- and with the place entirely to ourselves, we rolled our final joint of the day and gazed out the window into the night. Pauly was up for more, but I was done. Twelve was a good number to end on.

Here's a few more photos for you from the trip: 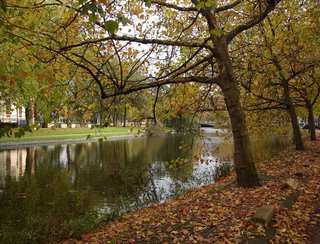 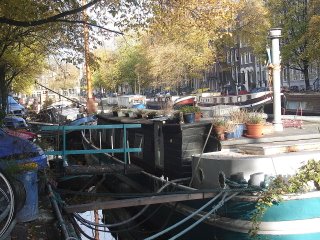 People actually live on these things 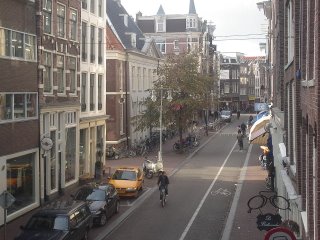 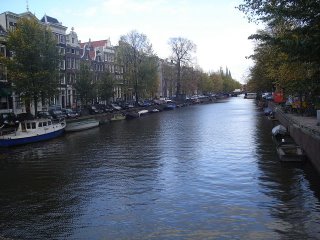 Canal in the Jordaan district 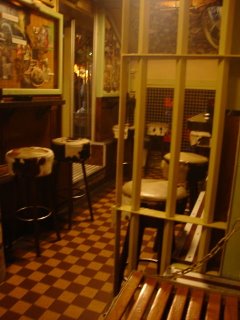 Converted jail cell at the Bulldog, which is housed in an old police building. 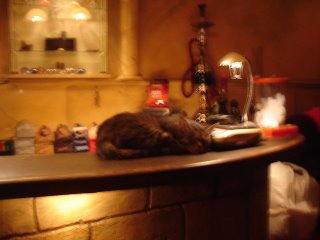 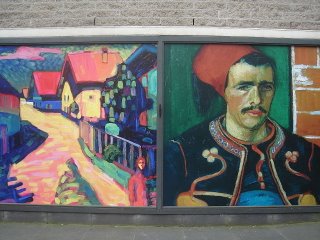 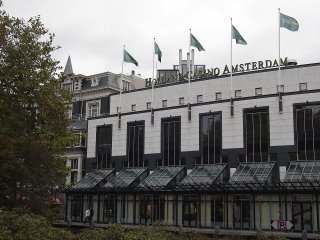 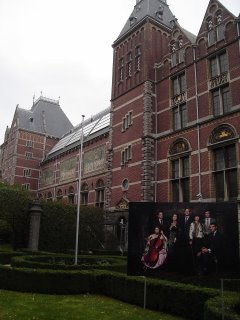 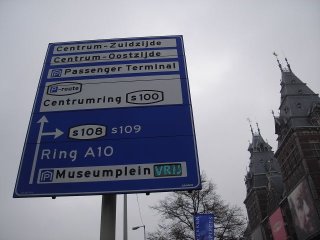 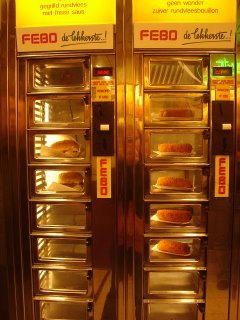 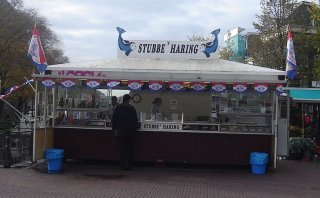 Raw herring...even MORE prop bets waiting to happen
Posted by change100 at 4:20 AM

Raw herring? If the munchies can succumb to something so nasty, then they must be selling some good shit over there.

i love your blog.

That pic "view from Pink Floyd's" is beyond awesome.