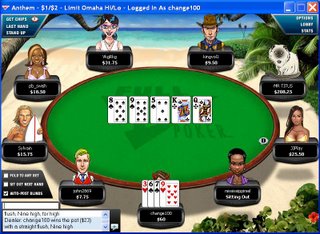 I want to write a shiny, happy poker post for you guys. Really I do. For a while today, I thought I would be. First thing I did today was play the Full Tilt double-stack $11K guarantee. I like double stacks. I tend to do well in them. Played a great tourney, got in with the best of it and busted out after 3 1/2 hours, 93rd of 764. 72 paid.

Undaunted, next up for me was a $14+1 super satellite that awarded entry into a $100+9 satellite to the $500+35 FTOPS Main Event. I decided to try the satellite after realizing that even cashing in the FTOPS ME would more than double my bankroll. I came in 3/68 in the first satellite and got my seat to the $109, where 465 runners and 86 seats awarded was a payout ratio I could more than live with.

Yeah, busted from that one in 189th. I think I made one pair the whole tournament.

Played three peeps after that. Bubbled one for cash, won tokens in the others. Took one of the tokens and rolled it into the $24+2 "superpeep" only to bust out 15th when double-belly-buster plus nut flush draw plus overcard fails to hit. Damn. Really wanted to play Don's tournament. Oh well. Saved the remaining peep for another day.

Later in the evening, I ran into Donkeypuncher playing $1-2 O8 and I managed to turn a $25 profit after a couple of hours. Right before he sat down, I flopped a straight flush. Played triple draw on Stars for what seemed like forever and broke even. All the while, I was grinding 2-4 LHE, just to try and clear some of that slow-as-molasses Full Tilt bonus. Just grinding, ABC poker. Nothing tricky.

Can you say -120 in 2 hours? That's a dollar a minute. I won 4 pots out of the 201 hands I played and saw 23% of flops. Cold deck after cold deck. Bad bad bad shit. Really didn't think it was possible to lose that much, that fast, at online 2-4 for fuck's sake. When I got a walk in the BB with AA and won half a big bet with KK on the very next hand I thought I'd start taking hostages.

I guess it is possible.

Then I tried the $14+1 FTOPS super again and busted out 2/3 of the way through the field.

And the University of Spoiled Children beat my Cal Bears despite a great start.

It'll turn around, you've been at it longer than me and know that cold leads inevitably to hot.

Thinking good thoughts for you.