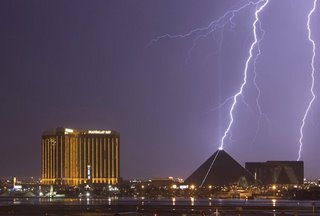 I’m on Grubby’s balcony in watching a thunderstorm. We got back from dinner at just before the sky opened up and marveled at nature’s light show with “oohs” and “whoas” as we cruised down the 215 East in my rental Chevy Malibu. And now I’m sitting out here, not only to bear witness to the sky’s theatrics, but because the temperature has dropped perhaps twenty degrees from the 113 I avoided all day, getting myself from air-conditioned apartment to air-conditioned car to air-conditioned casino as quickly and efficiently as possible. It’s nice out here for once. The heat has temporarily left us, the air tempered by humidity and cool wind. Every few seconds a lightning bolt pierces the desert sky revealing diagonal sheets of rain that pound onto the aluminum-roofed carports outside the building. It creates such a din that it sounds like a flash flood is coursing through the streets of our little suburban development.

I got to Vegas yesterday in record time– three hours and forty three minutes. I pitied the fools that would be spending their entire Sunday and then some in the 200+ miles of bumper to bumper gridlock that lined the southbound 15 toward as I flew by at 90 MPH on the other side. This is what happens when idiots check out of their hotels at 11 AM or noon on a summer weekend and decide to drive back to . Massive. Angry. Clusterfuck. Overheated cars every couple of miles. I saw one Mexican family’s van pulled over on the side of the road, each of the four kids screaming and crying as clothes blew out of their two open suitcases onto the freeway. Drivers honked and swerved at 80+MPH as T-shirts and stuffed animals blew into their lane.

How the suitcases got open on the freeway shoulder, we’ll never know.

When I got to the , I met up with Pauly and Wil for a beer at the Tilted Kilt. Our young, nublie waitress was named Stephanie, and the guys flirted with her mercilessly.

“Don’t you know who this guy is?” Pauly queried, aghast as he pointed at Wil. “He’s won bracelets.”
“Oh are you all with the poker thing?”
“Yeah. We come in here like every day. I’m serious, watch out for this one. Two final tables already this year.”
“Wow.”
“So what days do you work here? I want to make sure to sit in your section.”

We all had pints and Pauly and I got food. Wil asked Stephanie if he could order eleven french fries. Eleven. Precisely. She was going to palm him a handful, but Pauly and I decided to donate some of ours. Certainly we could spare eleven between us.

I spent this afternoon up at the covering the action for pokerblog.com. Though Phil Hellmuth made another final table and took his second shot this year at a tenth bracelet in the $3000 Omaha Hi-Lo, he came up short, losing most of his stack in the early going and ending up sixth. Had he succeeded, it would have been Hellmuth’s first bracelet in a non-hold’em event.

Today’s real story, however, was the mass confusion surrounding the $1500 Pot Limit Omaha event. It’s been listed as a $1500 freezeout since the WSOP schedule came out months ago, but evidently someone upstairs decided at the last minute to change it to a rebuy format. Naturally, a lot of the registered players were upset by this decision, as a rebuy event requires much deeper pockets than most of them had. So a lot of them (including Pauly) decided to unregister for the event. By the time morning rolled around, everything was so fucked up that the powers that be decided to ADD another bracelet event to the schedule ($1500 PLO w/ rebuys kicking off at 4 PM) in addition to the one they said they’d run all along ($1500 PLO freezeout starting at noon).

So there’s event 26, and what, event 26 ½? It’s like the freakin’ train platform in Harry Potter. Only wizards can see it. Muggles beware.

After Pauly busted from the PLO in the second level (I ran his bustout hand on twodimes.net and he got his money in as a 95% favorite vs. the Eurodonkey) we ducked out for a bite at my favorite new eatery... Sonic! I am in love with their Texas Toaster sandwiches. Pauly ordered the bacon, egg and cheese while I opted for the Chicken Club.

Tonight, we said goodbye to Grubby with dinner at . I had a surprisingly delicious sirloin for only $4.95. It was a sincere honor to have Grubby as my guide on my first visit to one of Vegas’ most storied locals casinos. While we waited for our table, Grubby collected his final players card bonus and Pauly donked off $20 at Mr. Cashman. As a woman played Little Lucy nearby, Grubby knew what round she was in without even looking at the machine.

“I can tell by the music” he grinned.

I'm getting better at posting photos. Here are some from the last few days: 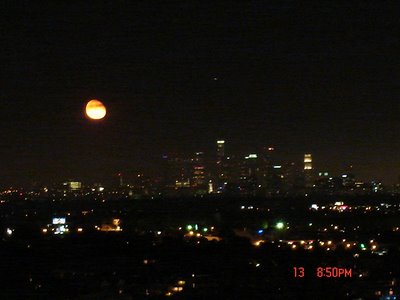 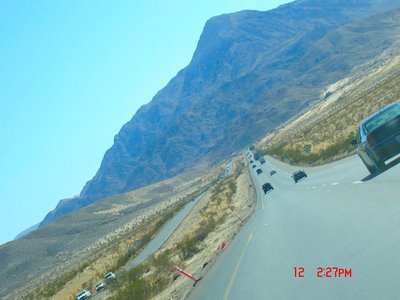 The Road to Vegas 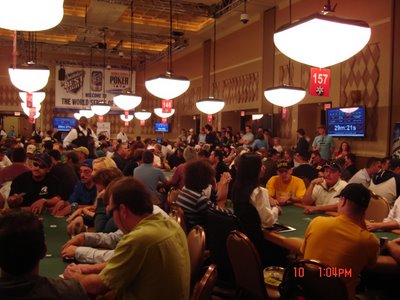 Action at the Rio 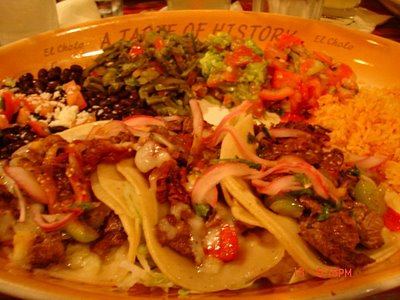 A picture of food for Daddy: these sirloin tacos al carbon from El Cholo contain BACON
Posted by change100 at 1:48 AM

That storm last night was crazy!! I wish the temps would stay down - but we both know that won't happen.

Last night was the best thunderstorm I've witnessed in my 4 years living in vegas.

That picture with the luxor is kickass... did you take it?

You should rename the road to vegas pic to "driving to vegas on tilt".

Finally! We get to see who you are!!! You really do look like Clarie Danes (sp?). You probably don't want to hear that.
Good first story and good post. Keep up the good work. I've got my banner up thanks to TripJax and learned how to post a photo. I'm moving from retarded HTML to Kindergarten, so I'm very proud. Now give me my Oreo snack.

Keep up the good work.

I loved those pictures - do they do make Frankenstein monsters and stuff at the Luxor?

Maybe its payback for what they have let happen to their cardroom..


Also helluva shame about the PLO cockup - problem is someone probably WONT get fired over this!