I didn't think it would be this hot yet. But I was already craving air conditioning, something my 14-year old Saturn does not have. I mean, it has an air conditioner. It just doesn't work. About an hour into the drive, I made a mental note to check out JetBlue flights to Vegas for the WSOP because there was no way I was going to have a repeat of last year. I rolled down every window as I flew down the 60 freeway, blowing a kiss to JoeSpeaker as I passed the Spanish-tiled roofs of Moreno Valley and wound my way east toward Palm Springs. The foothills looked so tan and crisp that a single spark could ignite everything around me.

My home for the next couple of days was an old-school 50's style motel on South Palm Canyon. It was three stories high with a stone 50's style exterior and a pool at the center. The place was half-full, mainly by pale older couples peppered with a few hippie backpacker types. My room was on the second floor and had a view of the San Jacinto mountains and the dozens of palm trees that shaded each hotel along the road. Best of all, it had its own balcony equipped with a table and chair. That would be a nice place to write.

I got a lot out while I was there. It was the first triple-digit weekend in the desert so I'd jump into the pool to swim a few laps and cool off after every couple of pages. I wrote two openings and threw one out. Most of the time I was writing on that balcony in a dripping wet bathing suit but it worked. I didn't even attempt to hook up an internet connection until my last few hours there because I knew it would be far too much of a distraction. I was also surrounded by casinos. Agua Caliente was 2 miles away and Spa Resort Casino within walking distance. I'm proud to say I didn't cross the threshold of either, though I was itching for blackjack at 3AM while I was blocked on the second night. I know it's -EV but I still love it.

The drive back took twice as long as the drive out and it was even hotter. There was a jacknifed big rig on the 60 and I sat at a standstill on the freeway utterly melting in my car for almost an hour before forcing my way over to the nearest exit. I got off in Chino and was very lost, though it wasn't nearly the ghetto they say it is on The O.C. Thankfully my sister was in front of her laptop and was able to find me an alternate route home.

I got back into the poker swing Sunday night, cashing the Full Tilt $9K Guaranteed. I swapped 5% with JoeSpeaker and still owe him $2.20 for my efforts ;) Last night I hit up the Stars $3.30 Rebuy, finishing in 15th of 2196 for about $130.00 and a $10+1 MTT on Full Tilt where I cashed in 16th. Missing the final table of the rebuy stung a bit because I was playing really well, but I can take some solace in the fact that it was my deepest finish in a field that huge. I had over a million chips at one point and I don't think I've ever had that many in front of me in a MTT.

I bit the bullet and forked over $200+ for Final Draft yesterday. I had to do it before it got truly annoying to transfer everything over from Word. At least, for me, it's a 100% tax-deductible professional expense. For the uninitiated, Final Draft is Hollywood's preferred screenwriting software platform. I used to have a copy I swiped from work, but it was unfortunately installed on the laptop I had stolen last summer. Once I bust from (or win!) the $22 noon donkfest MTT I'm playing right now, I'll be right back on the horse.

Showcase told me this morning that he's "so done" with Stacee. She showed up at 2AM again last night after partying her ass off at the cool Hollywood club du jour, LAX and passed out in his bed. Poor guy didn't even get laid.

Luckily, his wingman is coming back into town. 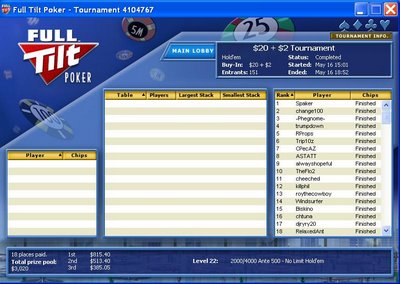 Final hand was a killer. At a 3-1 chip disadvantage (Spaker had just busted the 3rd place finisher for his whole stack) I raised with K7 on the button and he called with 58. Flop was 467. Money went in on the flop. You know the rest.

This hand helped too, along the way. 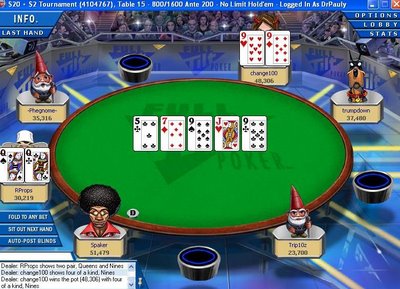 I'm gonna go sing karaoke now with Showcase to celebrate!!
Posted by change100 at 11:20 AM

I can see this ending badly, Stacee showing up in sweats every night to crash at his place and have Showcase hold her hair while she pukes and fetch him water and toast every morning while she frumps in bed and moans (and not from any kind of sex). He'll become increasingly bitter, she'll say "what's wrong sweeeeeeeetieeeeeee" a lot, he'll go into a dark place, she'll get clingy and call all the time (or text), his friends will start hating her, she'll talk about marriage, then the sniping from both, her hintng about what he needs to wear and him scowling, and finally 57 blowout fights, with Showcase taking her back 57 times for the makeup sex, the only time he gets any anymore (but keeps her around in the hopes of more), when finally he meets a sweet girl and suddenly remembers what it's like to live again and dumps her on her ass, when she finally rolls off a cliff, drunk, and dies in a firey crash.
I'd love to say I have no experience in this.
I'd be lying.
Except for the firey crash part.

So did Showcase get the commercial?

Nice work in the MTT's.

Man, you are my heroine these days - writing scripts in Palm Springs, cashing in tourneys, singing karaoke; great going on 2nd and the nice finish in a deep field. We need to get you into this year's WSOP? Are you going to play any of the upcoming Bike events?

You must be butta 'cause you're on a roll.

I was going to say you give me hope, but I'll leave it at it's great to see someone crank success at the MTT's. Well done!

I've never had a good experience on the 60. I'm convinced that we should just bomb it to hell. It would be cathartic.

Final Draft is so worth it. You're going to wonder how you ever managed without it.