Deal? Or No Deal?

It's almost 3 AM and I'm about to drop, but the effort was well worth it. 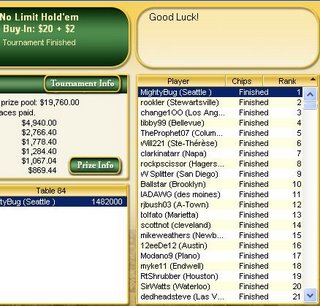 Until about an hour an a half into this tournament, I'd been having one of those weeks. Just beat after beat until I was rendered punch-drunk come 6:00 this evening. 9 straight losing days, the last three reaching my daily stop-loss limit. Today looked like it was going to be the fourth such day in a row.

WhenI busted out of the Full Tilt $19K earlier this evening, after another deep finish (255/1017) but no cash, I remarked to JoeSpeaker on IRC that I didn't seem to have much of a problem finishing deep in MTTs lately, but for the 75% or so of the time I'm getting through 2/3 of the field, I'm only cashing 20% or so of these tournaments. It's a revealing statistic that says a lot about my mid-late stage game. Essentially, I need to grow some stones and steal more pots in the early ante levels even when I'm card-dead. I need to take that tight-ass image I work so hard to build in the first hour and exploit the fuck out of it in the second. I've been playing too much pussy poker.

I've been a fan of these random $22 MTTs Stars runs in the evenings. They're like uber-180s, usually drawing around 600-900 players depending on the night. The quality of play just as bad as in the $22 180 SNGs and the players bust out just as fast, only the prizepool is even further inflated by the huge field. I look at these almost like overlays in a way. Tonight, it finally paid off.

Down to the final five tables, I played one of my most aggressive games in recent memory. I forced myself out of my comfort zone. I'm never going to see bigger money unless I continue to push myself in that direction. I played position more than I played hands the later it got. I wasn't afraid to pop a late position raiser all in if I picked up a premium hand and most of the time they folded to me. I raised with shit like KT and J9 and adopted orphan pots. By the time we got down to four-handed, less than 40,000 chips separated first from fourth, all our stacks in the $300K range with $15-30K blinds. Not a bad time for a four-way chop.

When we stopped play, I was third in chips. The deal yielded each of us essentially second place money, and when we played the rest out for TLB points, I still finished third. Looks like I made a great deal.

Fun to watch as well! Now you know why you were sitting at my DREAM TABLE with Dan Harrington!

Congratulations! I'm proud of you!

Alright Change, wtfg!! Yeah a great weekend for us both. At least you got to make a deal in your tourney. I kept telling our whole final table that we should deal, but nobody would effing listen until it was just me and one other guy, with me up 11-1 in chips. Then the bozo offered me an even split. Whatanass.

Anyways, great work. Let's see if we can follow these up with another big cash just to prove this isn't a fluke.

ps I knew you were an MTT specialist. I can recognize one from a mile away. ;)

Awesome. Congrats. How do you do it? You really are playing well and should consider maybe a WSOP tourney or a big one this year?

You are AMAZING! Keep kicking ass!

Congrats, hope it starts a hot streak for you.

Good shit! Way to work it!

You rule! You should be playing the WSOP Freerolls on Party...top 50 gets you to satellite, top 15 pay a seat to main event, 16-24 pays to a $2k preliminary event. With your knack for deep finishes, it should be a snap.