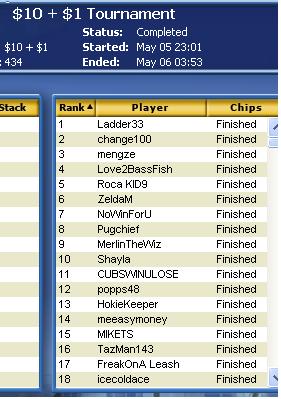 I was supposed to go to a Cinco de Mayo party in Venice Beach tonight with Showcase and Stacee but got waylaid by a final table in a Full Tilt multi. I was almost bounced in 7th place when I pushed very shortstacked with KQd and was called by pocket queens. But when CJ's on the rail and you're channeling the power of the luckbox, that three outer's gonna hit. And it did.

Heads-up play lasted exactly two hands. I went in outchipped about 2.5-1. Ladder folded to my button raise on the first hand. On the second one, he raised his button to 50K and I pushed in 176K more with 99. He instacalled with A4 and I was pretty happy about that, especially when the flop came KK3. But an ace on the turn ended my run.

Thanks to JoeSpeaker, Alan, and the Luckbox for sharing their mojo. And again to that wise friend, for telling me to stick to tournaments...it's working.
Posted by change100 at 1:11 AM

Um, yeah, what was that about playing what you're good at. Awesome.

Excellent form--maybe about time to jump up with the big boys!

Kickass, Change. Impressed but not surprised.