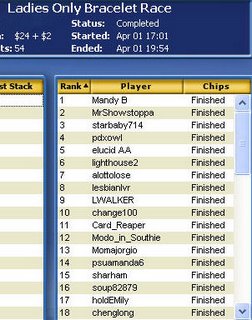 Yeah, I played poker this afternoon after saying I wouldn't. Needless to say the entire surface area of my skin stings right now after a spanking from a girl named Mandy. Though it was nowhere nearly as sexy as I would have liked, or you guys would like to believe.

But first, let me throw on my pimp hat and get some business out of the way before I launch into any sort of story. Why was I playing poker this morning? Because Full Tilt kicked off their "Bracelet Race" series of WSOP $1500 qualifiers with a special Ladies-Only tournament. These are running from now until July and there is a special points race for female bloggers. Here's the info I got via email from the Full Tilt Folks:

Full Tilt Poker is introducing "Ladies Only Bracelet Races" on Saturdays at 5:00pm EST. These $24+2 No-Limit Hold'em Tournaments guarantee at least one $1,500 Prize Package to the 2006 World Series of Poker Ladies Event on July 9th. This Prize Package includes a $1,000 entry into the event, as well as $500 in spending money.

Females are the fastest growing demographic in online poker, and this is your opportunity to turn a $26 buy-in into a World Series bracelet, as well as a chance at the $10,000 Main Event. Additionally, because we value our female poker players as well as the power of poker blogs, we would like to make a special offer to the female poker blogging community. That's why we have developed the Female Blogger World Series of Poker Challenge on Full Tilt Poker. There are four steps to participate in the FBWSOPCFTP:

2. Earn points by finishing well in each "Ladies Only Bracelet Race":

3. Blog about the FBWSOPCFTP. Try to make at least one blog post per week relating to the standings, talking trash about your fellow bloggers, recapping your play in a tournament, or anything you creative people can think of.

4. Send an e-mail to WSOPladies@fulltiltpoker.com with the url of your blog and your Full Tilt Poker screen name by April 7th. Also, your blog must have at least 1 post published before April 1st, so that players who do well in the tournaments don't just start a blog in order to become eligible for prizes. Also, the contest will be cancelled if we don't get at least 10 participants.

What do you get for finishing on top of the standings?

1st place: A $200+16 entry into our World Series of Poker Qualifiers during the week. 1 out of every 60 players in these tournaments receive a $12,000 Main Event Package.

The "Ladies Only Bracelet Race" tournaments will continue into the summer, leading up until the actual Ladies Only Event. If the FBWSOPCFTP is a success in April, we hope to start from scratch in May and do it all over again.

Compete in the FBWSOPCFTP.because you are probably better than Jennifer Tilly.

I don't know much I'm into trash-talking other bloggers, but I'm up for some healthy competition and a few prizes! I have a special place in my blackened little heart for the Bracelet Races-- I won one last year, freerolling my way in to the WSOP after taking out Rafe Furst's JJ with my Hilton Sisters. And I have the T-shirt to prove it.

Now, since most of you do not have breasts, there is a co-ed blogger WSOP satellite happening at Poker Stars on Monday, April 3rd at 6 PM Pacific thanks to our favorite diminutive uber-blogger Iggy. We need 50 to send one of our own into the lion's den so get yer asses registered! I know all you degenerates have accounts so what the hell are you waiting for!

Lastly and most importantly, Easycure is hosting a WPBT Circuit Event with a nifty name. "Hammer Out Cancer" with your favorite bloggers on Sunday, April 16th at 6 PM Pacific on Full Tilt! The buyin is $10+16 with $15 of the entry fee going to the American Cancer Society. Check out this post for further details. This is a cause incredibly close to both Showcase and I. He lost his dad to cancer 10 years ago and both of our moms are recent cancer survivors. I'll be playing for sure, and I'm going to try to convince him to stick his dead money in there as well ;)

15 minutes before the bracelet race was to go off there were only 21 people registered, meaning a huuuge overlay. I rolled my eyes, said what the hell, and signed up before running out the door to pick up a burrito for lunch. I'd need sustenance if I was going to commit to this. When I got back, we were just getting underway with only 54 runners. Anything under 63 represented an overlay, so I was happy about that.

It was only 3 or 4 hands before I got my first girl on girl stripper question and was "outed." It also turned out that one of my tablemates was Rick Wampler's girlfriend. Rick is a fellow member of Murderer's Row and a very good player himself. The rest of the table must have thought we were nuts as we started bantering about kicking the crap out of certain douchebag poets.

I was fortunate to double up early. I had chopped out two small pots and picked up KJo in the CO. I made a standard raise and the BB called. Flop came KJ2. I check-called the flop and check-called her push on the turn with K3, doubling to 3600 chips.

With a nice stack like that, I wanted to stay out of trouble for a while. Avoid coinflips. Pick up pots on the flop. It was about that time that the lady on my left started making my life very difficult in this tournament. Mandy B was on my immediate left and really didn't like having her blinds picked on. If I made a late position raise, she was over the top. If I raised from the SB she pushed in and if I completed from the SB, she raised. If was after 4 or 5 of these moves from her that I decided that if I ever got AA in this tournament, I was going to limp and trap her ass. I'm an aggressive player, and if there's one thing aggressive players hate, it's having another aggressor on your left. NLHE is much less fun under those circumstances-- the only way to defend against it is to become a trapper or a push monkey. Neither is a way I enjoy playing this game.

Near the end of the first hour, I lost my first significant coinflip with 77 vs. AK, but got those chips back pretty quickly when a MP player raised to 500 and I moved in for 2000 with KK. She called with QQ and my kings held.

I had a stack I needed to be stealing with and Mandy made it impossible. There was no way to put in a raise without having to be prepared to commit every chip I had. I started praying for a seat change, but being at Table 1, I didn't think that was happening. It was about then, when we were down to two tables, that people started popping in the chat box congratualting Mandy on her WSOP Main Event seat and her WPT seats.

Now I knew who she was. Mandy B was Amanda Baker. She's won seats online to Foxwoods, Borgata, The L.A. Poker Classic, the Poker Stars Carribean Adventure, the WSOP, and God knows what else. I'm also pretty sure she's dating a pro player. And she's on my left. Great. Just my luck.

The only way I was going to double up at this stage was to trap someone big time or play push poker with my 10-12 BB stack. The action folded to me in the CO, I looked down at two beautiful aces. Oh Mandy... well you came and you gave without taking... your chips are coming my wayyyy...I limped in for 200. Mandy raised to 860. The blinds folded and I called. Flop was Q high and uncoordinated, something like Q 7 4. I pushed my last 1400 and she instacalled... with KK. I wasn't expecting a hand quite that strong. Evidently Miss Mandy wasn't just aggressive, she was also a card rack. So needless to say, my trap didn't quite contain the bite I would have liked. She didn't back off one iota.

I was very card dead after that. We were 6 or 7 handed on two tables and the ante had just hit. I was pushing with anything I could pick up... KJo, A8s, etc. I was still under 3000 and needed a double up in a hurry if I was going to be any factor at the final table. I found 22 UTG+1 and pushed all in with an M of 4 and 150-300/25 blinds, but Evil Mandy woke up with 77 and sent me to the rail in 10th place. Booooooooooooooooo. Of course she went on to win the tournament and stick another notch in her already crowded belt.

With a different flop for that A6-JJ hand and a better table draw, who knows what I could have done. I think I played the best I could.

So I have 10 points in that contest, ladies. Catch me if you can, beetches.

Now back to your regularly scheduled hiatus.
Posted by change100 at 4:21 PM

What was different today from yesterday?

Keep on, keepin' on, Change

Not a whole lot, really. Played my same style of MTT game, ran into some craptastic luck, and wrote a quasi-whiny blog about it ;)

Though since I played less, I lost less money!

Thanks for giving me good food for thought.

Nice work, change. As much as I'm happy for you that you did well in the ladies' tourney, I'm even more pleased that you actually played after the recent goings-on in your poker career. You did exactly what I would have in your shoes. Congratulations!

Change, you crack me up. You play more on a hiatus than I do with my normal routine. Great job on the finish. I look forward to more results from your ladies' events.

You had to remind me that I do not have boobs!

change...stick around..I look forward to meeting you at the blogger events. Good showing at the event really a top 10 is nothing to be ashamed of.
Better than what I have done in the past year.

Mandy is a horrible poker name. Thats what makes it worse.

I think Mandy B is a sexy poker name.

I know Mandy B. She is a great player, and she is sure to become famous in tournament poker in the near future.
She is also a very special person. You should all root for her because it is nice to see good people succeed.

Thank you Mandy's friends who know how to Google...

Scorpking666 here, i took out mandy in a 26 dollar sattelite chip sattelite to the ftops main event last night and boy i wish i read ur blog b4 i mean i beat her but if i knew about her over the top betting i would have repopped her earlier, btw shes not that good, then again maybe i tilted her, because in the end she shoved in with 2nd pair bad kicker and i got het bounty, a shirt and im in the main event....sorry mandy, well really no im not...