The Ladies in the Hunt, Part II

A-A on the first hand always feels good. Syanpses fire in the happy parts of your brain, sending messages that this is it, this tournament's yours. It's your destiny. Damn those synapses. Bad synapses.

When I last left you, I had just won a $15 super satellite into the Full Tilt $40K Guaranteed after busting out of the Ladies Bracelet Race on a questionable hand. I was determined to redeem myself. I also reeeeaaaallly wanted the money. Over $11K for first. That would solve a helluva lot of problems.

I looked down at AsAc and raised the two limpers that were already in to 5xBB. Everyone folded back to the first limper, who called. The second limper folded. The flop came down 8 high and coordinated with two spades. I wasn't gonna fuck around and slowplay. The limper checked and I bet the pot. He called. The turn was a ten of spades. Not really what I wanted to see, but I have the nut flush redraw as well. The limper checks again and I bet 1/2 the pot.

And he checkraises me all in. Oh man... I have 1100 or so behind. He has the flush. There are straight draw possibilities out there but the T didn't make any straights. I think about a set of tens, but feel that TT would have either bet out or checkraised me ON the flop. It's the flush and I know it.

I muck my aces. Well that was a nice start.

I have 1100 left of my 2000 chips and have already been playing about three hours straight, including the super satellite that got me here. It aint gonna end for me on the first fucking hand. I vow to stay patient. And I do. I get KK a couple of orbits later and add 300 chips to my stack. TPTK with AT from late position gets me almost back to where I started, and I continue to chop out small pots for the rest of the first hour, going to break with close to T6000.

Then I almost lost it all.

I had the dreaded AA again on a KJ7 flop. My shortstacked opponent was the type who couldn't let go of TPTK and I put him to the test, reraising him all in. Only this time, he had top two pair. I suck out when the 7 on the river pairs the board, giving me aces up. With over 9K in chips, I'm now firmly in the top ten. Without a lot of cards coming my way, I managed to maintain my stack up to the early ante levels, when I ended up on the wrong end of a T2000 coinflip. JJ vs. AQ, and two aces on the flop. Boooo. I'm average again, with 180 of 474 runners remaining.

I hit two hands in the first level of the third hour. I flopped a straight from the BB with 35s and took down a nice pot. And then, there was the Sickest Hand I've Ever Seen. A screenshot's worth a thousand words in this case. 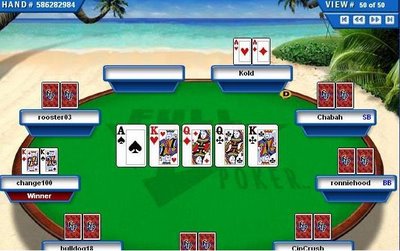 Yes, that is a one-outer you see on the river. Quad kings beat aces full after set over set on the flop. Had we been sitting at a live table at Commerce, we'd all be very rich now.

I was now living on borrowed time and magic voodoo in this tournament. I wasn't even supposed to be here. I wasn't supposed to suck out on that hand or fold those aces on the very first one, but I did. And now I had about 26000 and could do some damage.

I only played two major pots between the money bubble and the final table bubble. My 66 ran into a short stack's 88 and chopped out about a third of my stack, before I took out a medium stack with AA vs. his KJ. With about 60K, and the blinds up to 2000/4000/500, I had an M of about 7 and sat in the bottom third of the field with ten players remaining.

We're five handed on two tables. Action is folded to the cutoff who raises to 28,000 leaving himself only 35,000 behind. I have AK in the small blind. Believing I'm a race or better, I push in and feel like eating glass when he shows KK. One of only two hands I didn't want to see, and the overraise made me think he didn't exactly want a caller. The board brings no ace for me and I'm bounced in 10th place for $545 bucks. The next money jump would have brought me a desperately needed $400 more. But I was playing to win. I was pissed off for hours after I busted, though the $545 was my best tourney score in months. No one's more critical of me than me.

I analyzed the hand with CJ in the gay chat box and I agree with him that I made the right move and was unlucky to run into what I ran into. Most of the time in that situation, I have the guy dominated or I'm racing with a lower pair. But with the luck I had early on, I suppose it was only justice.

And if I hadn't folded A-A on the first hand, well... I'd be close to broke now the way Limit Hold'em's been treating me. But that's a story for another day. One I really hope I won't have to tell before the ending's rewritten...
Posted by change100 at 3:19 PM

At that late stage in the game, you have to believe that AK is the best hand.

I would have pushed too. Then immediately shit myself when he/she flipped the kings.

All in all, the right thing to do.

But you do have that screenshot to keep you warm at night. Nasty!

Damn that Dems Quad Beetches hand is incredible. One time I lost with quad 9s to quad Kings, that's when I knew it was time for me to log off for the evening. And go kill someone's dog or key up someone's car or something. Sheesh. At least you were on the winning end there of what is definitely one of the sickest suckouts I've ever seen.

And yes of course you can't be timid with AK with 10 players left. And more than that, I commend you for being probably one of the few people there who were actually playing to win the tournament instead of just trying to make the final table at that point. That is exactly the way I play MTTs, and it's the only way in my book to really get where you want to be and win the damn thing. I'm always trying to win these tournaments, never trying to just survive, and every decision you make along the way should be made with the goal of winning the tournament right in the front of your mind.

And btw I would not have laid down the Aces on hand #1. Not with the nut flush redraw in my back pocket, in addition to whatever other outs you may have had. But that's just me, and obviously what you did worked out great for you. Another top-10 in an MTT speaks for itself, Change. Nice work, and great writeup.

Nice money! Glad to see the most aggressive blogger agrees to your push. Is there an A x hand CJ wouldn't push with there?

Hey I would kill to be in the top 10 of any tourney online. However I hear where you are comin from.

I am on a link up craze lately, link me up if you can when you have a sec.