A Bounty and the Bronze 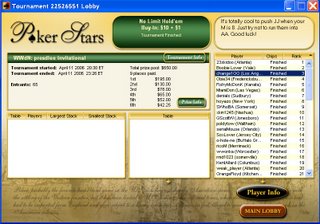 This was a nice surprise. I hadn't made a final table in about a month, and finishing well in a blogger tournament always makes it a little sweeter for me. I didn't think I was going to be around to play the WWdN tournament, but my lazy unemployed ass turned out to be on the couch taking a 4:20 smoke break just prior to start time. Then I saw that Mrs. Spaceman was playing and that sealed the deal for me. Realizing that dinner was going to have to wait until after the tournament, Pauly jumped into the fray as well.

I was way card dead to start off. I donked off maybe 300 chips on a failed steal attempt early on before getting my first double-up. With the action folded to me in the cutoff, I opened with AKo. DoubleAs pushed over the top of me from the BB. My read was that he thought I was stealing again and I decided to call thinking my AK was good. Dude shows THE HAMMER!! That takes some serious stones. I was up to 2700 and DoubleAs was riding a short stack, having me slightly covered before the move.

Then, the first of two of the biggest suck-resuck hands I've ever seen. My stack was halved when I got in with 88 vs. KK. I read him for AK or AQ when he made a stop-and-go push on a low ragged flop with two of one suit, but was surprised to see he had the goods. The turn comes... AN 8! The river A KING!! NOOOOO! What a mindfuck. Don't put an 8 up there and then yank my suckout away! Back on a short stack, I got some chips back when I busted CJ. My ace-crap dominated his ace-crap and his luckbox powers couldn't activate in time.

Then I grabbed the motherfuckin' brass ring. I busted Wheaton, baby.

Wil raised from the SB with A6. I had AT suited in the BB and thought I had the best hand. Wil was relatively short and would open with a pretty wide range there. I reraised him what I thought would put him all-in, but my math was shitty and it turned out to be $500 short of that. Wil went all-in for the rest of his chips and I called. The flop came blanks, but Wil hit his 6 on the turn.

"Put a ten up there," Pauly called from the couch.

And the ten hit.

Join us next week for the change100 invitational.

I more than doubled my stack around the bubble time. There were maybe two or three big stacks and the rest of the field were riding Ms from 5 to nonexistent. I was also totally starving by this point, visions of succulent medium-rare filets dancing in my head. By the time we hit the final table I had about 21K.

We went from 9 to 3 very quickly. 23skidoo took out a lot of the remaining short stacks and had BoobieLover and I outchipped by about 2-1 each. This next hand turned out to be my whole tournament. Boobie Lover folded his button and I completed in the SB with J3. 23skidoo checked with 69o. The flop came down J T 7. I made a pot-sized bet and 23skidoo called. Turn came an 8, filling his gutshot. I fired 4800 at the pot and he pushed in. I only had 7700 behind, but just knew I was beat. I folded and he showed the hand. That call from him on the flop was sketchy to say the least. I ended up pushing a couple of hands later with A7 from the SB. 23skidoo called with A9 and sent me to the steakhouse....er...rail.

I'll take the 78 bucks. The steak was good too.

I've made back about 1/3 of my March losses just grinding it out at LHE. I made some money clearing that $100 Party bonus and acting on the advice of a certain wise Texan, I took some of that profit over to Titan where I'm clearing another $400 in bonus at their juicy 6 max tables. Doing well there so far. I'm staying away from tourneys for now, though I have two tokens at Full Tilt and will likely use them for Bracelet Races.

Just realizing now that this weekend is Easter and that means dinner with and probing questions from my family. And potentially several hours inside a Catholic Church. Aiyah.

The Doc and I are hitting the road tomorrow. Northbound, to the city by the bay and back to Los Angeles along Highway 1. I think Showcase needs some space and I'm always excited to get out of the basin, even if only for a couple of days. I have some thinking to do on this trip. When I get back and Pauly returns to Vegas, I need to start one of two big writing projects. One is a long-gestating idea of mine I'd write as a longform novel. The other is an old idea of Charlie's that I've been thinking of executing as a screenplay, more as an experiment than anything else.

As we're fortunate enough to have family in flyover country, we're having a nice Easter brunch at Campanile instead. We'll have a toast to your misery.

Change, great playing yesterday at the WWdN. I still say you're one of the better MTT players out there. You didn't even get many cards at first but still managed to hold on, including weathering some bad beats that you should not have had to endure. Anyways, congratulations again, it was nice playing with you for a while there, and I'm glad to see you've stayed back on the poker horse.

For the record... your Ace-crap was the lowly AK... while mine was the powerful A7s. I didn't have the energy to will the suckout... that'll teach me to play after 6 hours of travel.

Hey! MiamiDon pointed out your blog to me today. I like to read the female blogs since I'm a chic too. I like yours so I'll bookmark you. I have to go home for Easter with the family this weekend so I feel your pain!!

Great job Change, it will be nice to see your name up in lights next Tuesday.

Congrats on the nice showing, and have a great weekend.