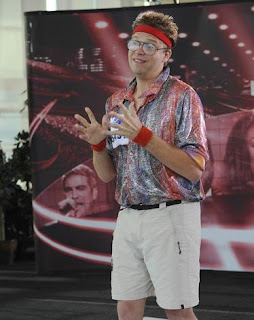 "Norman Gentle" moments before receiving his golden ticket
Idol was so bad this week I didn't even want to recap it.

The only thing I remotely enjoyed about last week's duo of episodes was watching "Bikini Girl" Katrina Darrell finally get the heave-ho. Because if she got one more nanosecond of camera time I was going to have to launch into one of my rants about skanks like her being atrocious role models for the millions of teenage girls that tune in every week-- showing young women that the best way to get noticed is to parade around practically naked, force a (probably gay) man to make out with you on-camera, and blow off your detractors with bullshit rationalizations like "girls are haters" and "they're just jealous."

Life on the pole isn't that bad, Katrina. You can still make some good money for a few years before gravity takes hold and you'll be relegated to the afternoon shift. Just don't get into meth.

I'm really disappointed to say it since I'm obviously a fan of the show, but the truth is, Idol has been bad so far this season. Really bad. A once and future stripper with a mediocre voice, a contestant who has already had an album chart on Billboard and the presence of comedian Nick Mitchell and his bespectacled alter ego "Norman Gentle" in Hollywood Week have been the major stories so far. Not the talent. And when they do get around to, you know, actually showcasing some voices, it's been less about how the contestants are singing and more about their tragedy-laced backgrounds.

I just want to hear some music, dammit. Is that really too much to ask for between all the product placements?

So who got the boot this week as half of our 150 Hollywood hopefuls were sent packing? After auditioning with a searing rendition of "Barracuda," Emily Wynne-Hughes went 0 for 2 in Tinseltown, botching a No Doubt song and blanking on her lyrics during her group performance of Fleetwood Mac's "Don't Stop." Jessica Furney arrived at the Kodak Theatre looking much as she did at her audition in Kansas and barely got a lick of airtime before being cut in the first round, despite turning out one of the best initial auditions of the whole bunch. Told ya she'd need the glamazon makeover to survive despite her Kelly Clarkson-esque vocal chops. And poor little orphan Rose Flack was cut after forgetting her lyrics during the group number. Oh well, see you on Phish tour, Rose!

This week, the 75 remaining Idols are whittled down to the Top 36 which will advance to the performance shows. That list has been leaked all over the internet, and of course, contains more than a few surprises.

There's really no reason for you to disparage the afternoon shift like that....