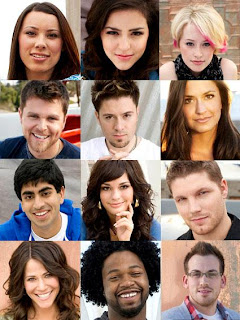 The first 12 lambs of the 36 remaining in the American Idol Season 8 flock were led to the slaughter in front of 25 million or so viewers last night with a two-hour performance show. While I went for a bowl of pork and white bean soup, Pauly elected to injest an entire double-strength cannabis brownie for dinner, and by the time show opener Jackie Tohn took the stage, he had offered his own personal "thumbs up/thumbs down" rating services in between fits of laughter induced by his discovery, only 15 minutes prior, of fmylife.com.

If there is one cardinal rule when it comes to song choice on American Idol that the judges have tried to ram down contestants' throats over the last seven seasons it's this: Girls, don't do Whitney. Guys, don't do Michael. It never works out for anyone. Put more broadly-- don't attempt the big iconic songs when you know your voice just can't handle it. This piece of advice was roundly ignored by this crop of contestants and most of them flamed out spectacularly as they tried on tunes too big for their karaoke-quality voices. However, two singers rose to the top of this field and did so by proving that not only could they handle the big songs, but they could slaythem.

I was totally disappointed in Jackie's schtick-laden, hammy performance when I was expecting some Janis Joplin-meets-Susan Tedeschi soul singing. And what the fuck was going on with that outfit? The corset looked like it was nicked from the wardrobe department of a college production of Grease, and who in their right mind decides that, yeah, shiny black lycra leggings and high-top sneakers will look totally sexy.As for the judges, Randy and Kara thought she really worked the stage and showed us who she is as an artist (seriously?). Paula mumbled something incoherent about falling in love with her, and Simon bluntly went where the others wouldn't, declaring that she blew a good opportunity "by doing something silly rather than doing something good."

"Needs to show more cleavage" said Pauly, but he gave her the thumbs-up anyway. "She could play a lounge at Mandalay Bay. "

This guy must have completely slipped by me, because I couldn't remember this North Carolina chicken shack waiter at all from Hollywood Week. Braddy went for a sleepy ballad that showed off his voice but didn't necessarily showcase him as a well-defined artist. Upon hearing the falsetto runs at the end, Pauly gave it a definitive thumbs-down. Sure it was a solid vocal, but will I remember it in 15 minutes, let alone tomorrow? (Answer: no, not really) Kara, Paula and Randy jizzed all over it, proclaming his performance "effortless" and "brilliant" but Simon criticized his lack of star quality (ding ding ding!).

"You're a nice, shy guy with a very good voice." But not a pop star. Next!

Well, now. Here we go. Everyone's favorite Mormon mom decided to sing Aretha's blues and man did she ever. Grace exectued the song's vocal acrobatics and scat sections with ease and exuded soulful confidence onstage. Even Pauly gave her the thumbs up. While I think she's a shoo-in to advance to the Top 12, I'm less sure about this whole "dirtied up" look she's trying on for the show. I mean, the pink streak in the hair, the red lips, the black slipdress, the costumey long knotted pearls? It all seems a bit misplaced on this delicate little blonde girl with porcelain skin and I'm not sure what message she's trying to send with it.

Hello Mr. Hardworking Struggling Midwesterner trying to make good and earn some money for his family. I bet you have a lot of friends back home that are going to be dialing those phones for you. However, I couldn't hear the actual redneck lyrics to this redneck song, as Pauly spent the duration of Keith's performance singing his own improvised set of redneck-themed lyrics, which detailed his Daddy's trip to county lockup for cooking meth in his trailer.

"I don't think you're going to have any impact with that song whatsoever,"was Simon Cowell's apt assessment of the performance. Our boy went too safe here and it's just not going to cut it when it comes to standing out in this crowd.

Stevie Wright - "You Belong with Me"

Dead in the water from the off-key intro, this will unfortunately mark the end for 17-year old Stevie in the music industry and I'm pretty sure she knew it about halfway through her performance. She had good intentions with selecting a contemporary song by someone her age (Taylor Swift), but her choice not only exposed just how weak her voice was compared to her peers, but showed us no sign whatsoever of the Stevie that nailed "At Last" to the wall back at her initial audition.

"Stevie it was terrible... you looked nervous, out of your depth... there is zero chance of you making it through to the next round after that" said Simon. Ouch. You really can't do much worse than bomb in front of 25 million people during the audition of your life.


Anoop Desai - "Angel of Mine"

Pauly gave Anoop-Dawg's performance a reluctant thumbs up. "Just because I loved him in Slumdog Millionaire." Anoop turned in what was in my opinion, the best male vocal of the night, but my god what a boring-ass song choice! This round is all about standing out from the crowd and picking a mediocre Monica song was the wrong move, especially for a guy who does have the chops to tackle something huge. Based on the vocal, I hope he goes through, but I think the redneck robodialers that are behind guys like Michael Sarver are going to give him a run for his money when it comes to getting votes. Even if he does miss the cut this week, he's a strong contender for the wild card round.

Casey Carlson - "Every Little Thing She Does is Magic"

Pauly gave Carly bonus points for picking the Police, "But too bad it sounds like she's fuckin' singing at a fuckin' high school dance, like when the nerd is about to hook up with the hot chick."

This was total cruise ship karaoke crapola for me. I mean, this was one of the most epically bad song choices ever made by a contestant on American Idol when you really think about it. Alas, the judges had such high hopes for Casey because "she's such a package artist" (read: a really hot girl who can sing), but she pretty much dug her own grave on this one. This drivel was barely good enough for the retirees sipping their margaritas on the Sapphire Princess' Lanai deck. The cutesy faces, the winking... it was just utterly tragic. Score one for the talented ugly people-- the other bikini girl is toast!

Michael Sarver - "I Don't Wanna Be"

Pauly: "I guess this guy could play a fraternity party."

Michael Sarver's Gavin deGraw cover was nothing better than a standard bar band treatment of the song. Sorry oil rig guy. I know you wanted Idol to be your bailout, but after that forgettable performance you're really going to have to hope that the entire state of Oklahoma dialed their ass off for you last night. Remember, kids. It's not just enough to sing it well anymore. That might have worked in Season 2 or 3, but now you're expected to "put your stamp on the song" and he did nothing of the sort here. However... if there's one guy not named Danny Gokey in this group that is going to get the sympathy vote for being a nice guy down on his luck, it's Sarver.

Boskovich went for the song that Kelly Clarkson broke out with back in Season 1 but in this performance, she sounded like she was straining the entire time. Once again, it's just a simple case of a contestant picking a song too big for her voice. Instead of providing her with a breakout moment, on her, the song just didn't fit and she came off like a good wedding singer rather than a future pop superstar. Props for attempting to stand out, but overestimating the strength of her own voice sealed Boskovich's exit from the Idol stage.

(It's also worth noting that at this point, Pauly gave up and decided to watch Apolcalypse Now in the other room. )

Stephen Fowler "Rock With You"

Fowler got in one good high note (though he cracked on it) but everything else about this performance was ordinary and forgettable. I don't see America giving him a third chance after the second chance in Hollywood when he forgot his lyrics at the piano. This was a bad arrangement, an awful song choice...and he blew it. He blew it spectacularly. Damn these two-hour episodes are long. Next!

Tatiana Del Toro - "Saving All My Love for You"

Even doing Whitney, whom you're NOT SUPPOSED TO DO, Tatiana almost got there with the vocal. Almost. But let's get real here. Tatiana is bat shit crazy. She's not going to the Top 12. She's here because she's nuts and got a lot of attention. The vocal was OK, but the whole "desperate to be famous" thing that Simon aptly recognized (um, remember kids, she did bring her demo tape to the initial audition)just mucks up the whole package and makes it impossible for me to see here as a legitimate artist. Who is this girl? Do we really want to watch her fly the freak flag high and proud again? Didn't think so.

I believe that Danny Gokey could have showed up last night and taken a shit onstage and he would have been voted through. I mean, the guy's 28 and his wife is dead...he's going to make the Top 12 because America loves a good sob story. This was a safe, even predictable choice for Danny to take on in the first round. The bridge and a strong finish on this one (along with the show-closing slot) coupled with his sympathetic background will probably be more than enough to send him through to the next round. Don't get me wrong-- I didn't think he sucked or anything. It was just safe, and it's really the failure of his peers that ensured his spot in the Top 12.

My predictions as to who will advance: Danny Gokey, Alexis Grace, and I think it's a tossup between Michael Sarver and Anoop-Dawg.
Posted by change100 at 1:47 PM

I totally agree with your assessment of the show. Danny did play it safe but he could get up there and sing the phonebook and I'd vote for him. Not because of the sob story but because he reminds me of Robert Downey Jr. and RDJ is one of my favorite actors ever. I hope Danny takes more risks once he's on the big show. If he does, I think he could win it.

The surprise may be seeing Tatianna advance - folks may vote for her because she *is* batshit crazy.

I wish Anoop would have made it.

That dude can sing.