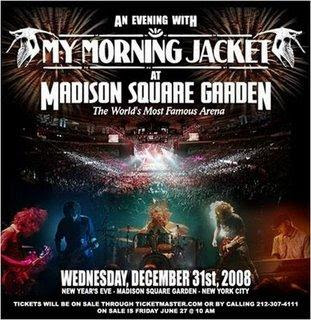 I wore my cape to the show. Despite the frigid, fourteen-degree night, I brought it along, its silky sequined fabric rolled up and tucked inside my purse. I bought the cape at a vintage shop in San Francisco when I was up there for the Outside Lands Festival in August and ever since, it had been calling to me from the closet, begging for a proper venue to make its debut. When My Morning Jacket put out a message to their fans encouraging them to go all-out and dress in their New Years finest for the show, I immediately discarded all thoughts of ball gowns, little black dresses and rhinestone jewelry for the cape. If there ever was a proper place for the cape's coming-out party, it was at the MMJ New Year's Show at Madison Square Garden.

Buried in layers of fleece and wool topped with scarves and hats we shuffled off the subway and made our way up five stories from Penn Station. Though Pauly was flooded with memories of Knicks and Rangers games, Phish shows and countless other concerts, it was my first time inside the Garden despite having passed underneath it countless times in a train car. We breezed through security, the deck of New York Yankees playing cards inside my bag earning a good-natured quip from the guard who searched me.

"If this was a Phish show they'd have totally searched us!" said the man with the graying hair.

He was one half of a fiftyish couple who rode with us on the escalators up toward our section. His wife was petite and red-haired and they ended up having the seats directly in front of us. Pauly chatted them up, discovering that they had gone to the String Cheese Incident show on New Year's Eve 2006 while we were down the street at the Fillmore seeing My Morning Jacket. Now they were getting their shot at a MMJ NYE. I donned my cape and we drank Heinekens as we waited for the lights to dim.

Move On Up* (Curtis Mayfield)
Evil Urges*
Off the Record
Gideon
The Way that He Sings> Thank You Too
I'm Amazed
Golden **
Librarian
You're All I Need to Get By *** (Marvin Gaye/Tammi Terrell)
Express Yourself* (Charles Wright)
What a Wonderful Man
Lay Low
Phone Went West
Look at You****
Dondante
Smokin from Shootin>Touch Me I'm Going to Scream Pt. 2
Run Thru
The Wanderer (Dion)
Dancefloors
Magheetah


I always say everything is better with a horn section and this was no exception. I was pumped to see the return of the NYE horns that had added another layer of funk and finesse to MMJ's epic 2006 New Year's show at the Fillmore. After Ella Fitzgerald's version of What are You Doing New Year's Eve played over the loudspeakers, the boys launched into a high-energy opener-- Curtis Mayfield's Move on Up. The title track from their latest album, Evil Urges was next, also with horns (and, as we later discovered, was broadcast on the CNN New Year's Special with Anderson Cooper). Off the Record ended in a trippy extended jam -- that's when we first spotted a gray-haired, ponytailed hippie spinning through the aisles on what must have been a fairly intense acid trip. The rest of the first set was a well-thought-out mix of MMJ tunes new and old. The highlights for me were I'm Amazed, Run Thru, Dancefloors and Dondante-- when Pauly came back from a piss break holding two glasses of champagne topped with strawberries. Do I have a thoughtful boyfriend or what?

After a quick setbreak, the countdown to the new year began. MMJ returned to the stage dressed in white tuxedos with top hats and played Kool & the Gang's Celebration as hundreds of white balloons and thousands of pieces of silver confetti rained on the crowd. I can't think of a more magical way to ring in 2009 than in the greatest city in the world, with the one I love the most in the world, with one of our favorite bands adding the soundtrack.

Pauly got the whole thing on camera:

The second half of the show was compact and cover-heavy.Rather than the 80’s pop tunes that they tried on at the Fillmore after the year rolled over from ’06 to ’07 (George Michael’s Careless Whisper, Lionel Ritchie’s All Night Long ) MMJ went for Motown, soul, and 70’s funk during the first minutes of ’09, covering Kool & the Gang, Sam Cooke and James Brown. Nicole Atkins took lead vocals on two tunes, and utterly shredded the high harmonies with Jim James on You’re All I Need to Get By and Islands in the Stream. One Big Holiday, formerly a favorite opener for the Jacket, closed the show this time, with an explosive, energetic treatment, James whipping his hair maniacally as he tore into his Flying V.

Pauly preferred the ’06 setlist but for me it was a toss-up. As for the venues, MSG certainly turned up the spectacle, but the intimacy of the Fillmore was missed by both of us.

Pauly's video of the closer, One Big Holiday, is already up on Coventry. For a peek at the Jim James/Nicole Atkins duet on You're All I Need to Get By, check it out below: