American Idol: A Rose by Any Other Name 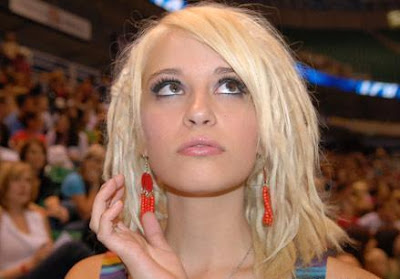 Who's got my molly?

Seriously, can we get to Hollywood Week already?

FOX must have been thinking the same thing, as this week, the torture of auditions finally finished up. We got three episodes this week as the judging quartet of Simon, Paula, Randy, and Kara hit up Salt Lake City, Jacksonville, New York, and San Juan, Puerto Rico. Everyone from High School Musical 3 extras, to aspiring nudists, to an actual Osmond family member showed up in the hopes of grabbing their golden ticket. That and an abundance of orphans, teen mothers, and disease survivors to tug at your fragile heartstrings. Here's who I think we'll be hearing from again:

5. Jasmine Murray. I wasn't exactly blown away by her rendition of the dreadful tune "Big Girls Don't Cry" by Fergie, but I know something commercial when I see it. Meet the new black Disney girl, America. If 16-year old Jasmine doesn't survive the American Idol Top 12 this season, she'll be signing a deal to star in the new series The Magicians of MLK Boulevard or something of that ilk.

4. Rose Flack. Who doesn't love a 17-year old hippie orphan from Idaho? Adorable little Rose is sure to become Coventry's new favorite Idol contestant. Though she stepped into the audition room shoeless, her dirt-caked feet straight out of the lot of a String Cheese show, Simon thought she looked marvelous and her soulful rendition of Carole King's "I Feel the Earth Move" made me think she could be an edgier, less squeaky-clean version of last year's fifth-place finisher, Brooke White. And, if we don't see you on Idol, Rose-- see you on Phish tour! We'll save you some pharmies!

3. Jorge Nunez. A tenor with gorgeous natural technique, he bowled over the judges with a version of "My Way" en espanol. Nunez has the potential to be hugely commercial and has a confidence about him that I really haven't seen too much this season. Now here's someone who can go to town during Gloria Estefan week!

2. Megan Corkery. Little Megan is only 23, already getting divorced, and the mother of a 2-year old son. When she announced she was singing "Can't Help Lovin' Dat Man" I braced myself for a horror show, but instead was introduced to a standout jazz voice, complete with a crackling scat. I don't know how it will be for her to handle some of the big pop ballads that come with the AI territory, but I'm truly excited to see her do more. Gotta root for a talented Mormon mom getting out of a bad marriage!

1. Jackie Tohn. Jackie is a veteran who has been playing gigs for 10 years and you can tell it immediately from the ease she had about her when she walked into the room. She has rare combination of infectous energy and a gritty, smoky voice that reveals both depth and gravitas. I hope she's heard of a little band called Grace Potter & the Nocturnals because those are some perfect songs for her.

Hollywood Week finally kicks off on Tuesday night, where our 160-or-so hopefuls will be whittled down to only a few dozen. Let's get rrrrrrrreadddy for rejectionnnnnnn!!!
Posted by change100 at 12:43 PM