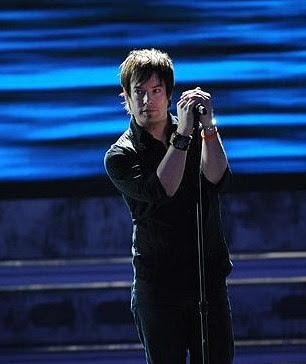 This week brought the episode that makes me feel more craggy and dated with every passing season-- songs from the year you were born in. So basically… it’s 80’s night with the early nineties thrown in there for good measure by wunderkind David Archuleta. Even worse for these budding C-list celebs is that all of them have to deal with their humiliating childhood home videos receiving a viewing audience of more than 20 million. Embarassing moments, home movies, the cheesy Ford commercial-of-the-week? How will FOX torture these kids next? Ramiele Malubay "Alone" (1987) Ummm... when the wailing black woman who is singing background for you upstages your own performance, you know you're in trouble. (Seriously… those are high G’s and she was right on top of them.) Unfortunately, Background Girl wasn’t standing center stage, and instead we were left to contend with Ramiele, who was shrill and sharp and prone to shouting in her higher range, while her lower notes were poorly supported and flat. As she went into the second chorus, I kept thinking about how much I would have rather heard the Carly version. Or even the Gina Glocksen version from last season. Look, I know it’s a hard song. I sing it really badly in my car all the time. But it’s crunch time, people. Nevertheless, Ramiele is inexplicably popular. Even Simon Cowell has mentioned that fact in a number of media outlets. I’m just not sure who she’s appealing to at this point with so many other diverse choices. 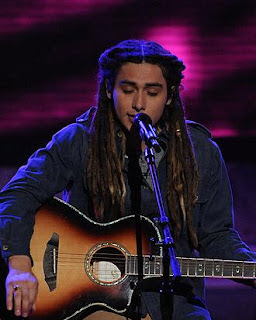 Jason Castro "Fragile" (1987) Barefoot and playing his acoustic guitar, dressed in worn slim-cut corduroys, Jason Castro looked like he should be playing in a college dorm lounge rather than on the #1 TV show in the country. Cowell even went to far as to accuse him of not trying hard enough. I kind of have to agree. He tried to charm the pants off of us again with those pretty blue eyes and that dreamy smile that could melt an ice shelf… but it just wasn’t enough. Until he turns out another “Halleluljah,” Castro’s skating by on personality and a pretty face. Perhaps a trip to the bottom three this week will give him the kick in the pants he needs.

Syesha Mercado "If I Were Your Woman" (1987) Finally, Syesha just stands there, and sings, and she's fabulous. This was the right song performed the right way at the right time for her in the competition. Syesha turned it around for herself tonight and could be a contender if she continues to step up her game. She’s unfortunately been toward the back of the pack in terms of votes over the last few weeks, but maybe this turn will win her a few converts. 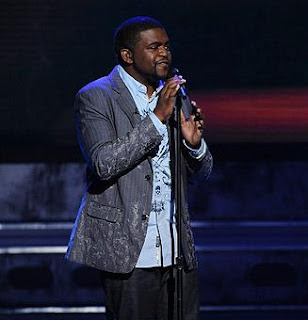 Chikezie "If Only for One Night' (1985) Chikezie is like Luther Vandross in an embroidered hipster blazer and a $300 graphic-printed button-down. He certainly has the chops to be in the top ten, delivering a strong, layered, controlled vocal, but his song choice was, I dunno, kind of un-hip? In seasons past, a nice throwback soul song like this might have flown, but not with the competition he's facing right now. 5% of what we’ve seen from Chikezie is original, electric, even balls-to-the-wall risky, but the other 95% is just a good wedding singer. Unfortunately, that’s what America saw tonight and I think it will reflect in the vote.

Brooke White "Every Breath You Take" Brooke did might have been an Idol first-- starting the song over again—which is certainly a by-product of her choice to accompany herself on the piano on this Police song. I like Brooke’s vibe but she could have set off more fireworks on the bridge and the final chorus. In that sense, her version was sort of one-dimensional. I don't think she's in any danger, though. At this point I see Brooke hanging around all the way to the top four. 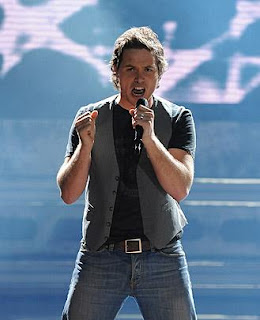 Michael Johns "We Are the Champions" (1978) Johns has undeniable charisma and this was better than his last couple of performances. But even as Pauly said "he's like, one of those gay guys that should be singing at the hooker bar in Vegas." Johns had a good moment tonight but in reality, it's probably his peak in the competition and as far as he's capable of going as a singer. Johns is so the close-but-no-cigar guy this year. But he’s still dreamy.

Carly Smithson "Total Eclipse of the Heart" (1983) Seriously, who shit in Randy's oatmeal this morning? I totally dug this song choice, dawg! I thought it was perfect for her, and it was remarkably controlled given how easy it is to go overboard on this piece. A big song for a big voice and a good week for her.

David Archuleta "You're the Voice" (1990) "OH MY GOD! THEY CAST HER! THEY STYLED HER! I'LL GO BLOW THAT KID MYSELF!! " screamed Showcase as Archuleta's Daddy Rose trotted out some lip-glossed teen queen into the audience to play the part of young David's potential prom date. Seriously, you know once this kid turns 18 he’s gonna be cruising Santa Monica Blvd. with every other young singing prodigy. Take a cue from Danny Noriega and embrace it! As for the performance, well, he looks like he'd be the perfect male foil for Hannah Montana on the Disney Channel (He dances! He sings! He's so clean-cut! So subtly ethnic yet All-American!) This performance was very All-Star Kids Variety Extravaganza for me. I really felt his age for the first time. And were the fuck did he get that song? I mean, has anyone heard that before, or is it only available in “Songs for Young Tenor Prodigies, Volume 1?” 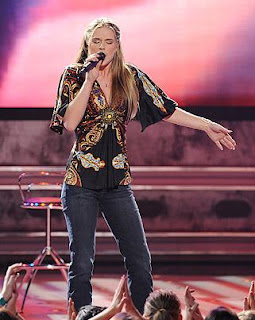 Kristy Lee Cook "God Bless the U.S.A." (1984) OK... a lonnnnng time ago back in another life, when I was a singing cocktail waitress on a cruise ship, I used to have to sing this song while we sailed past the Statue of Liberty. And usually we were so half in the bag by then from pounding glasses of cheap Chardonnay in the galleys in between running cocktails to corporate groups from New Jersey that we’d completely mangle the lyrics. I am completely with Simon when he called it "the most clever song choice I've heard in years." Kristy Lee made the incredibly shrewd choice of pandering to the Middle American, rural-dwelling, Mike Huckabee-voting American Idol dialing bloc. I wouldn’t be surprised at all if she completely avoided the bottom three this week, even though she is easily the weakest remaining contestant. Nice hand, Kristy and see you next week. Will we be hearing “America the Beautiful?”

David Cook "Billie Jean" (1982) David Cook may be winning over the nation with his slick modern rock versions of classic songs, but I’ve officially fallen off the bandwagon. This week, Cook borrowed Chris Cornell’s downtempo, acoustic version of “Billie Jean” that appeared on the Audioslave frontman's 2007 solo release. But here's the thing. Most of America isn't going to know that. And everyone who didn't listen carefully to Ryan Seacrest's introduction to the song is going to think that Cook came up with this arrangement on his own. But he didn't. He just performed a very good cover of Chris Cornell's cover. Just like he did with Doxology's version of “Eleanor Rigby.” And Whitesnake's version of “Daytripper.” So that's three covers of covers in a row now. Hey, even I was fooled until I did a couple of searches on iTunes and You Tube. While the competitor in me admires his shrewd strategy and song choices, there's a taste of deception to the way 19 Entertainment is playing off these arrangements on the show and in the media circus that surrounds it. This morning, people were calling in left and right to Seacrest’s radio show to comment on how original David Cook is. I’m not denying his talent, but I wish the judges would draw some attention to the fact that he’s using other artists’ arrangements and (albeit unintentionally) passing them off as his own. But hey, who are we kidding. It’s all about making money and selling records, riiiight?

My prediction for the week: I thought last week would be it for Chikezie, but I think I was a bit hasty. But this vote should do it.

Get out of bed. I need results!

Chickeasy is done. I'm not surprised. I'm over him... and Syesha (who doesn't have "it" at all) and Ramalamadingdong, who's voice isn't nearly as big as people suggest (yes, it's big when you're two feet tall... but it ain't that big).

Kristy Lee Cook is a genius. There hasn't been a song choice that smart in a long, long time (Kat McPhee's Somewhere Over the Rainbow carried her to the finals, I suppose... there may be others). However, she'll be going soon enough.

Cook's "brilliant" performance of "Hello" was also apparently an Incubus cover. He's not as brilliant as people say. But my wife loves him...

Chris Daughtry did the same thing. He covered covers to get through the competition. My favorite was his original rendition of Stevie Wonder's "Higher Ground", a shameless cover of the cover done by the Red Hot Chili Peppers.

Most of these arrangements are really all the original.

I actually thought the Jason Castro version was just him mimicking Rufus Wainwright's cover of “Halleluljah”. One my favorite songs, but I'm not sure it was an original arrangement. I was more excited to see the song get some big exposure than anything. Even though the version I was thinking of was a prominent part of the movie "Shrek."

Good call. Too bad Chikezie never got to do "Try a Little Tenderness." (Am positive he'd have done that eventually, if he'd survived.)

I don't follow American Idol, but as of this week I have seen two episodes this season. That qualifier out of the way....

Having viewed what I have, there is one issue that nags above all others: Who/what convinced that Castro kid that a male with hair styled in a Whoopi Goldberg fashion was a good idea?

Seriously, it barely even works for
Whoopi.....

Does race raise its ugly head in last week's results? It's hard to think otherwise with the bottom two, although I can't figure out how Ramieile is still there (she must have the short people and Asian vote, which combined is one heck of a voting pool...). I actually like Johns and Carly the best so far, although it is strange how subtle things really impact voting. Carly's little face tics pull votes away, for example.