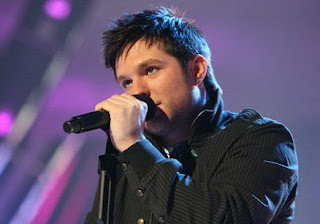 Disco week is usually one of my favorite stops on American Idol's musical genre merry-go-round. Not this year. I sat down last night with Showcase to watch our final four Idols attack the music of Barry Gibb and found myself jumping into a $2-4 limit game on Full Tilt midway through, just to ease the boredom. $2-4 hold'em > Last Night's Idol. Usually I'm stoked for the switch to two songs apiece from each contestant... but not when 7 of the 8 performances are barely cruise ship-worthy. This episode sucked donkey testicles, and I think we might be heading for a surprise elimination tonight based on the performances our three divas and one beat-boxer turned out. Let's see how they fared.

The Showcase verdict: "Yeah it was perfect, but like... whatever"

Melinda is always a consistent performer with perfect vocals, yada yada yada, but this was a little blah for me. Where's the wow factor? This is the end game people. STEP IT UP! Simon said it all for me- "I expect incredible... this was more of a backing vocalist's performance... you're better than that."

The Showcase verdict: "Honestly, this is like Bar Mitzvah buffet music."

I agree with him on the first 3/4 of the performance, which was a total snooze. But she blew it out spectacularly in the end with her thrilling high belt. At this point, though "resident pro" Melinda continues to turn out sold performances each week, her consistency is actually getting a little boring. There's never an off-the-wall song choice from her, or even an unexpected styling choice. I think she needs to like, rip her clothes off or something to surprise these judges. Or come out in a pony-hawk.

Melinda also had a "bad draw" tonight... it's never an advantage to go first on Idol.

The Showcase verdict: "This is HORRIBLE."

So, last week I was OK with the beat boxing. Blake abandoned it for just long enough to make the audience crave it again. This time, I thought it was gratuitous and misplaced. Whereas the timing and placement of the beat boxing was more appropriate last week, the "ehh ehhh eh eh eh ehhh" schtick in this performance sucked ASS. Adding the beat boxing to an already cheesy dance song= suckwad. Adding it to transform a Bon Jovi song= slightly more acceptable. The mandarin collared print blazer was tres ghey as well. Strike One for Beat-Box Blake.

The Showcase verdict: "THIS is the best male vocalist they could come up with on this show? Beat-Box Blake?"

This is the worst. A new beat-box low. I tuned out after the second or third record scratch. Terrible vocal, worse arrangement. Simon called it "completely tuneless." No shit. And that argyle sweater-shirt-whatever it is needs to be lit on fire. Blake deserves to be voted off after this disastrous turn-- unfortunately I think his droves of fans will keep him afloat into the semi-finals.

The Showcase verdict: "That was pretty good. And you know that's the first time I noticed that the 'K' in LaKisha is capitalized."

LaKisha took the tempo down a touch and got the crowd going with her rendition of this disco classic. I thought it was a great song choice for her... though on a week with stronger performances from the others, I just might have dubbed it bad karaoke. Her wardrobe was at a new low during this performance-- you don't put a plus-size girl in a black mini over cropped leggings in front of 35 million people unless you want to do some serious emotional damage to her confidence. I don't care how trendy it is. Leggings are BAD and they need to go back to 1987 where they belong.

Simon's take? "No kiss tonight, baby... you're back to the shouting again... you've got to bring it back on the second one."

I dunno. I kinda liked it. Am I in a minority of one?

Snoooooooooooooooooze. At this point in the evening I was far more interested in my $2-4 table on Full Tilt on LaKisha's LITE FM snoozer. LaKisha turned out a forgettable performance when she should have been singing for her life. I will, however give her props for the best use of cleavage in an American Idol performance this season-- she looked so much better in that green dress than in the leggings nightmare. LaKisha is unfortunately the most vulnerable contestant this week.

The Barry Gibb verdict: "I know a couple of hundred people who have sung this song, and there is no greater version than Jordin's."

When I think about which performances were truly memorable this season, almost all of them were delivered by Jordin Sparks. "I Who Have Nothing." "You'll Never Walk Alone." She just keeps knocking them out of the park. Jordin owned this song and in my mind, earned herself a lock in the final two this week. Her voice is stunningly mature for a 17 year old. I would kill to belt that high and with such clarity of tone. AND someone finally dressed her in a young, hip outfit that works for her body type! Weeeeeeee!

The Showcase verdict: "This show has SUCKED."

Jordin brings another BARBRA tune! (her first was "On a Clear Day") Ship it! This wasn't Jordin's best vocal or song choice, but it was still light years better than either of Beat-Box Blake's offerings. Simon called it "pageanty"-- I wouldn't go that far, but Jordin does have a tendency to go a little "old" on some of her song choices. The challenge for her is to stay in that power pop-ballad wheelhouse while still coming off as young, hip, and fresh. Melinda has the same challenge in the R&B/Soul genre. I think Jordin has the edge here, though with her young age and bubbly personality. Because come on... we all know they're gonna be the final two.

This week's Performance Rankings (week of 5/8):

Will be voted off: Gut says LaKisha, but I hope Beat-Box gets the boot, creating a 3-diva semi-final.

10:27 AM: Dial Idol is predicting this morning that Jordin and Beat-Box Blake are safe, while Melinda and LaKisha will be the bottom two, their vote totals in a near-statistical tie. Aiii ya!!! Melinda being voted off in 4th place would be the Chris Daughtry-esque shock of the season, wouldn't it?

Jordin owned the night again. Her first performance was among the best of the season for any performer. He second was not as good and still second best of the night.

This may shock you, but I actually enjoyed much of Blake's second song. I thought it was 311ish and well done. His first song was an abortion. And not one done by a doctor... more like the hanger in the back alley.

Melinda was safe and mature and vocally sound and... BORING. Poor girl. She's a great vocalist. She's never song poorly. And yet she failed to capture anything last night.

LaKisha... tons of talent... but she had another bad night... and it's gonna send her home. I thought her first song was bad and her second wasn't much better.

Jordin has really surprised me these last few weeks. I think she has stepped up her game and is really in it to win it. Loved the long soft waves for hair choice last night, it was very Beonce-ish and very pretty.

Blake is retarded. LOL The beat boxing was out of place and uncalled for on those songs. It was laughable, really.

I like Melinda, but when I look at her, no matter what she's wearing or how she does her hair, I always see a 40 yr old woman and that's not exactly the image of a young and hip American Idol.

LaKisha has that great powerful, soul-filled voice and I think she has more personality than Melinda.

But I definetly think Jordin should win it and hope it's Blake who makes the next exit.

This was a nightmare night for AI. Who would have thought? I love the BeeGees music and was sure with the vocalist that are left they would do justice. And I could see Blake doing Jive Talkin with his beatboxing. Was I ever fooled. I have a greater appreciation of the BeeGees now, for sure. I liked Blake's second song unlike Randy and Simon who have a tendency to dislike anything they don't recognize. Melinda was her usual self, just boring. While I agree she's a fine vocalist and in the beginning I was sure she was the best, she's just the same week after week. I love Lakeshia, but I think it's her week to go home. I think Jordin has zoned in on the fact she gets the best reviews when singing ballads, but may have made a mistake last night with her last choice. But hey dawg, listen up dawg, let's keep it real here, what do I know?
yellehs2