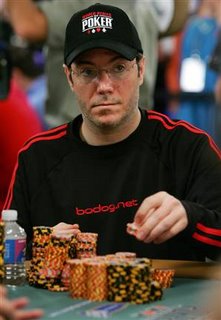 I had a feeling this was coming, after hearing all the rumors as the Main Event final table progressed. Chip leader and eventual WSOP champion Jamie Gold only had half of his own action, having verbally promised half of whatever he won to his friend and fellow poker player Crispin Leyser. Speculation has been rampant about the reasoning behind and the specifics of Leyser and Gold's deal in the twelve days that have passed since he captured the largest cash prize in sports history. And now, Poker News is reporting this morning that Leyser has filed suit against Gold in the Las Vegas District Court seeking half of his Main Event winnings. Leyser claims to have copies of voicemails Gold left him on the morning of the final table confirming the 50/50 deal. Gold, who has yet to physically collect his $12 million in winnings from Harrah's, has been consequently blocked from doing so by a Nevada judge until the matter can be resolved. 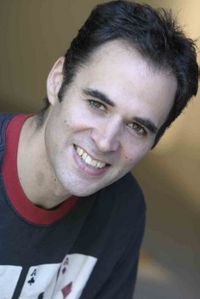 So what's the backstory? Jamie Gold had some sort of arrangement with Bodog to procure celebrities to play under their banner in the WSOP Main Event. Gold ran into trouble getting it done and turned to his friend, Crispin Leyser (right) for help. Leyser, an instructor at the WPT Boot Camps, bailed Gold out of the situation by securing actor Matthew Lillard's participation. And as a thank you, Bodog offered to buy Jamie Gold into the Main Event. Gold was planning on playing the ME anyway, so he told the Bodog people to give the seat to Leyser. However, (and this is according to Gold himself in an interview on the Canadian poker radio show "Rounders") Bodog had such faith in Gold's poker ability that they wanted only him to take the seat. Straight from the horse's mouth:

"Bodog and I were involved in a production, that we're still developing, which is a radio show not unlike the Howard Stern show. It's an all-celebrity radio show. So we were in business anyway and they said they wanted me to play. They didn't know Crispin. But they knew that I was a great poker player and they'd heard all these stories about Johnny Chan and that I was winning all these tournaments and they said, "Listen, no offense to the celebrities we have on our team, we love them, but the chances of them getting deep in this tournament are very slim. The chances of you... everyone's telling us you're like Kobe Bryant coming out of high school... that you have a chance to make it. We want to see what you can do. You're not allowed to transfer this to Crispin.'"

Here's where it gets shady. Since Crispin was now shit out of luck in terms of a seat AND he'd already done a big favor for Gold in bailing him out of the promise to Bodog that he couldn't keep, Gold offered him half of his take in the Main Event. But, like the poker world itself, neither man imagined that it could get so big. Had Gold cashed for 30 or 40 or even 200 grand, we wouldn't be hearing about any of this.

Definitely check out Gold's lengthy interview on Rounders Radio. It's like pure, priceless verbal vomit for 30 minutes straight. The guy doesn't shut up and thinks he's the greatest player that ever lived. He also publicly challenges Phil Hellmuth to a heads-up match for $1 million and alleges that ESPN producers have already approached him about televising it.

Here's a few more quotes from Gold. Norman Chad allegedly said the following to him after he won.

"I gotta be honest with you, it was the greatest display of poker talent I've ever seen, and I've seen everything. Nobody's ever put on a show like that in the history of poker."

When asked if any of his famous former clients (a la James Gandolfini, Felicity Huffman, and Lucy Liu) had called to wish him well during the tournament Gold gave a classic Hollywood response.

"I am friendly with them, but unfortunately we don't keep up with each other. "

Then there are the questions about whether or not Gold was even a real agent or if it's all one big Hollywood exaggeration. Showbiz gossip giant Defamer was of course on the case, dissecting his client list, and later publishing a letter defending him from one of his actual ex-clients, former soap opera actor Lane Davies, who, according to Gold himself, was indeed the only actor who called and well-wished him during the Main Event.

Mo' money, mo' problems. No wonder he didn't want to win. He knew all this shit would hit the fan.

Ironic, though that he told ESPN that $6 million would be enough for him. Looks like it might be exactly what he'll get.

Agreed, yes..."The whole tournament was changed based on my play."

Thanks for the interview link.

His results were far more remarkable than his performance. Every time he showed his cards, the table manipulated the info more than he did.

Outside of all that, I do know the Leysers well, and I can say with 10000% honesty that I dont know a more down-to-earth, mature couple who respect the game of poker more. OK, perhaps the Feduniaks. I hope karma takes over and rules in favor of those that have it. Period. Ty for your insightful blog.

"He also publicly challenges Phil Hellmuth to a heads-up match for $1 million and alleges that ESPN producers have already approached him about televising it."

Despite not being a Hellmuth fan, I'd encourage Phil to run over this one-hit wonder so Varkonyi doesn't get knocked so badly anymore.