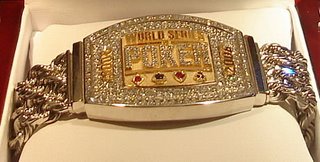 When it was all over, I slipped out the back door by the dealers’ tent to get some air. The 5 AM sky was growing light over the Strip, the first rays of pink peeking out from behind the mountains. I held the door open for a trio of ESPN cameramen as they loaded out their equipment and took in a lungful of arid desert air. Less than an hour after Hollywood agent Jamie Gold claimed victory in the WSOP Main Event, all who had made a home at the Rio over the last five weeks were dispersing to the winds. It was on to the next assignment, the next tournament, the next city on the circuit. The European media had been departing in waves all day, trying to make it onto the few London, Stockholm, and Dublin-bound flights that hadn’t been cancelled in the wake of the foiled terrorist attack. Ryan and Wil scrambled back to Los Angeles in the mid-afternoon, and Otis called it a Series around midnight, so hungry to return to his wife and son that he was prepared to drive the 2500 miles from Nevada to G-Vegas should he run into the slightest bit of trouble with the airlines.

Everyone was fried. Sleep-deprived. Tweaking on too much sugar and caffiene. Some were on tilt after watching Gold hit hand after hand after hand, seemingly invincible behind his mountain of eighty million billion chips, effortlessly swatting aside world-class opponents like Allen Cunningham with the turn of a card. I was one of them. I’ll admit being a little pissed that he won, and so easily. It made for a pretty boring final table. Sort of like a Lord of the Rings movie without the battle sequences. You know Frodo’s gonna make it to the volcano or whatever and drop that ring inside. Just imagine if he and his pals hadn’t run into the slightest bit of trouble along the way. Where’s your epic now, huh?

Pauly, however, was finally happy after more than a week spent at 70% tilt. As he typed in his last live update and uploaded the post for all to see, his face broke out into the widest grin I’d seen since I moved to Vegas a month ago. He smiled as if he’d made a touchdown reception at fourth and long and looked ready to spike the ball in the end zone. Instead, he gave a swift kick to the six foot tall inflatable Milwaukee’s Beast beer can that sat inside media room doorway. It toppled to the ground and and he left it there for someone else to deal with as he walked out of the Rio for the last time.

The sun came up as I drove down the 215 to Henderson in silence. Exhaustion, tilt, and half a bowl of Train Wreck made soup of my brain. As I tried to pin some meaning on the month I’d spent meeting new people, participating in some of the most ridiculous prop bets known to man, watching world-class poker, and getting paid to write about it, there was only one thought that ran laps through my mind.

The temporary purpose I’d enjoyed in my temporary move here was finished. Nothing left to cover. No more bracelets to be handed out, at least for another year. In six days I’d have to pack up and get on the road back to Los Angeles, crossing my fingers that my shitheap of a vehicle would survive the 280 miles of highway from the desert to the ocean. Pulling myself out of the vacuum of the WSOP, I’d re-entered the harsh reality of having to go home again and try to scrape by. Freelancing. Finishing my godforsaken script. Walking dogs with Showcase. Whatever.

I also couldn’t stop thinking about Jamie Gold. He hadn’t even wanted to win, and yet there he was, $12 million richer practically overnight. Just goes to show you, when you’re on a heater, you’re on a heater. For him, it was fate. Karmic destiny. Score one for the washed-up agents of the world. After all, it was probably his showbiz experience that gave him the edge he needed in poker. Hollywood taught Jamie Gold how to lie. It taught him to read people. It gave him a little of the necessary gamble, and it reinforced his bullshit meter. All are qualities of a great poker player. All are skills used day in and day out in the business. 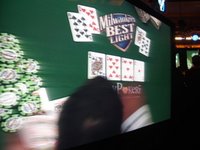 Hollywood is all about separating the real truths from the semi-truths. Distinguishing reality from hype. Is this new comedian the real deal? Or is the agent just selling him so hard to me because he just stole the comedian away from a rival agency and wants to show his new client just how many offers he can procure for him? Is this writer really interested in my idea? Or, is he just using my project as a stalking horse– feigning interest and potential unavailabilty in order to get another studio across town to pay him more money on the thing he really wants to do? Did that queen of diamonds on the turn make him top pair? Or is he just pushing on a semi-bluff with the diamond draw? Before I even knew what a flop was, I had been reading studio executives’ “tells” and body language during pitches for years. I can still walk into a room of those douchebags and know within 15 minutes if they were buying or just feigning polite interest. I’m sure Jamie Gold can too.

I think it was the day we got down to three tables when I noticed that L.A. had invaded the Amazon Room. Gold’s entourage had flown/driven in and were taking up the better part of the center bleacher section. Everyone was a little louder, a little more tan, a little more made-up, and a little less judicious with their choices when it came to making and taking cell phone calls. Suddenly surrounded by his hometown posse, Gold went from waiting in line with everyone else for the john to having two burly bodyguards escort him into the mens’ room.

The true hilarity of it all? Two weeks ago, Jamie Gold couldn’t get arrested in A-list Hollywood. He was just one of hundreds of guys who are successful in the industry for a time as agents or executives or whatever and then just sort of slip off the Wilshire Boulevard radar after leaving a prestigious company to “go indie” and open their own shop. Or direct. Or write. Or sell real estate. Or produce reality television. I should know. I did the same thing myself not too long ago. 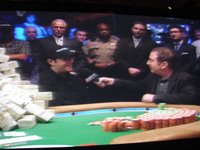 In Jamie Gold, we have something of an anti-hero as our new world champion. He didn’t win his way in to the Main Event on a satellite– he was bought in by Bodog in exchange for helping them procure C-list celebrities to play the WSOP under their banner. Gold doesn’t have the Cinderella quality of Moneymaker in 2003, already having won nearly $100,000 in L.A. area tournaments. He isn’t a poster boy for the cerebral internet contingent like Raymer. He doesn’t carry the torch for international players like Hachem. He’s an ex-agent who lives in Malibu. This is the guy who told ESPN that he didn’t even want to win because he didn’t want to deal with the fame that came with victory. If that makes a Hollywood snark like me a little nauseous, I can’t imagine how the Joe Sixpack poker players across America are going to feel.

No one can completely donk their way to a victory this significant. Lucky streaks like the one Gold enjoyed in the last six hours of final table play are part of what it takes to win tournaments. When the hole card cameras come out and the broadcast finally airs, we’ll get to see how well he really played. How many moves he made. And if Hollywood did instill in him a keen ability to read his opponents.

But here I am, three days later. Still in Vegas. Still wondering.

i love what you're doing over here!

Thank you for some great coverage. You should consider from freelancing journalism assignments - and did you get my e-mail regarding the project I sent you? After that great post, I almost feel like I'm pimping myself, which is probably the LAST thing you want right now. But I'm interested to hear what you think.
Good luck in what you decide, Change, and Snakes on a Plane opens this Friday!!!

Great read Change. I was in Vegas on the final day and was surprised by how intimate and unassuming the setup looked live.

Change, as always a great post. Peaker might be onto something with the freelance journalism thing. You must have made some contacts with a variety of media outlets during the WSOP (not to be confused with SOAP, which is a much cooler bunch of letters), plus your bevy of Hollyweird contacts, not to mention the whole experience that is Pauly and his circle of weirdness. Whatever you figure out, congrats on surviving the WSOP, hope your car gets you back to LA incident-free, and see ya at the theatres!

Brilliant writing, Change. And you hit the nail right on the head -- I can't wait for the television airing to see just how unbelievably lucky Jamie Gold got in the end.

Not sure if you saw my post a couple of weeks back the day before Gold took it all down, but I actually know a guy at work who was very close to Jamie in college. Word is that Jamie was an absolute sleaze bag, someone who was always working on the next big scam, and who everyone knew not to lend any money to because he never paid anyone back. Funny that this is now the guy who will be the next "face of poker" for winning the Big One in 2006.

One of these years I can't wait for a big-name professional to take down the big prize. Here's hoping it's not Hellmuth.

Thanks for the post and for all the great WSOP coverage.