I pulled up to my parents' house as darkness fell on Christmas Eve to find their quiet West L.A. street blocked by two cop cars and a tow truck. A sparkling new silver F-150 with a smashed-in front grill was being forcibly loaded onto the back of the tow vehicle while the cops took notes and muttered into their walkies. My dad told me that earlier in the afternoon, two guys had screeched up to the curb in the truck while he was outside doing yard work. They got out of the truck, walked around the front of the car, briefly inspected the damage, and took off, abandoning it in front of our neighbors' house. Probably some sort of hit & run.

I spent Christmas as I usually do, quietly and in the company of my parents, my little sister, and Showcase. I managed to survive Mass without bursting into flames for all my heathen behavior this year, though my Dad and I spent most of the service trading barbs about the cantor with the speech impediment and the faygola music director's excruciating penchant for requiring a sung response to every freakin' prayer, spiced with bad Jesus-pop melodies. There were enough quilted Chanel bags in my immediate eyeline to stock Barney's for an entire season, and the eight-year old girl in front of me revealed a pair of Dolce & Gabbana fringed suede boots as she climbed on top of the pew trying to grab a better view of the processional. Though it's been over 10 years since my Catholicism lapsed and I disappointed my parents by ceasing my attendance at Sunday Mass, a ritual they had instilled in me since birth, very little has changed in the Westwood parish where I grew up. Same rich kids, different year. New pint-sized replacements of my former peers.

On Christmas Day I cooked a grand meal for everyone. I've been handling the holiday meals in my family for maybe the last four or five years, and I make a once-a-year splurge on some premium ingredients. In honor of Grubby I decided to try out my new digital camera and take a few shots of my handiwork: 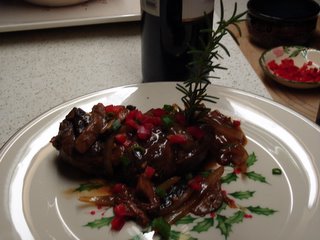 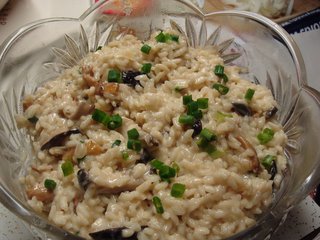 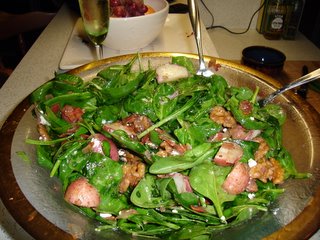 Salad of New Potatoes and Spinach with Walnuts, Blue Cheese and a Warm Bacon Vinaigrette

Showcase and I are going to catch a flick tonight... Munich I think. We head up to San Francisco on Thursday for New Years'. We're thinking scenic coastal route on the way up and 90 MPH through Steinbeck country on the way back.

I'm going to do my damndest to finish up both Vegas trip reports tonight and tomorrow. I still can't sleep. I think Pauly's insomnia has rubbed off on me.

This faygala blogger regrets not having met the shikse while she was in Vegas.

J/K about being a faygala.

That looks like a dandy risotto. I like to use dried porcini reconstituted in a little white wine, which then gets filtered and dumped back into the risotto. Never splurged on truffles - when it comes to ingredients that fine, I like them safely in the hands of a professional.

(Contrarian that I am, I also prefer the Salinas Valley route up and back to SF. With the time you save you can practically make a little day trip to Monterey/Carmel anyway. And I really dig those flat fields that go right up to the foot of the mountains.)

ooo. that made me hungry. merry xmas, chika. hope to see you soon.