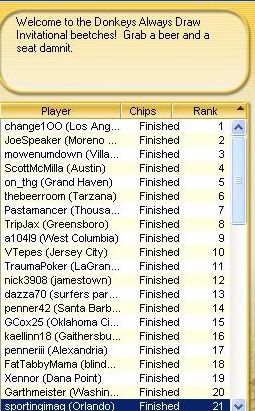 Back to back final tables!
I decided to play Jordan and TripJax's fabulously titled "Donkeys Always Draw" tournament at the very last minute. Al Can't Hang had alerted me to it last night when I called him for a dial-a-shot following my third place finish in the WWdN tourney. I was already an hour into the Full Tilt $10K tournament with April, who busted out on a terrible beat when her set of sevens was sucked out by a runner runner flush. The dude had T4! Aii yaa. With my short stack on break at Full Tilt, I jumped into the foray on Stars with the rest of bloggerdom. Pauly popped in the IM window and we made another last longer bet.

In the early action, I picked up AKs and raised to 80. Heather popped me to 200 and the big blind went all-in. I didn't want to play this hand against both of them, and I thought a large raise could move Heather off. So I went all in. Heather tanked for a long time before mucking her QQ. The BB had pocket tens and I lost the race, though I picked up the side pot. Don't think the Princess was too happy with me on that one. Then, with AA in middle position, I made a standard-size raise and JoeSpeaker called. We went heads up to a J 5 2 rainbow flop. I bet out smallish (120) and Speaker popped me to 360. I smooth-called. Turn a 2. I checked, he bet 600 and I pushed in. He called with 77 and my aces held with a 5 on the river. With T3000 or so in my stack I felt pretty comfortable.

I chopped out smallish pots on preflop raises and flop bets until the ante hit. The deck decided to smack me in the head about then and I became, in Jordan's words, "a one-woman wrecking ball!" I took out Vennor with AA vs. his AQ and put a big hurt on Penneriii with a set of Queens vs. his 66. GCox's AT fell to my pocket jacks, and Mrs. Sox Lover's AK was sucked out when my KJ found a jack on the flop. I hit the final table with about T28000 after that little run.

Immediately I lost two big hands. AJ fell to Scott McMillan's KT when a ten flopped. Then I flopped a set vs. on_thg's nut flush draw that got there on the turn after I put him all-in on the flop. I notice that JoeSpeaker is down to 2700. I really don't want him to double up because I know just how good a closer he is. But luck and fate were on Speaker's side tonight. All-in with JJ vs. Facty's pocket rockets, Speaker spiked a jack on the river in a fit of voodoo magic and suddenly had a healthy stack. "Fuck," I wrote to Pauly on IM. "Speaker has chips."

Like I said yesteday, any tournament victory involves at least one world-class suckout. This one was no different. Down to T10000 chips, I re-raised all in with pocket sixes and got called by Jestocost's pocket nines. A 6 on the flop and I'm saved! And back up to 21K.

In tonight's "Final Table Turning Point," I look at AA (again) and made a standard raise from MP and got reraised all-in by on_thg. I insta-call and he shows KK. The aces hold and I double to 42K. That's a helluva bad way to go out. Sorry about that one!

After busting Scott with trip aces on the flop to his KJ, I picked up JJ vs. Mowenudown's QT. The board came a bunch of baby cards and I was heads-up with fellow Murderer's Row assassin JoeSpeaker. You know, the one I'd been worried about from the beginning. I tried to keep my shit together as we started battling. I looked up at QJ on the button and raised to 6000. Speaker pushed and I called 10K more. I was feeling behind there and saw that I was when his K5 turned up. The flop came 6 T 9, giving me an OESD and eliminating three of Speaker's outs. I need paint or an eight...

The turn is a King. And I celebrated my first MTT win since the freakin' summer! Dial-a-puffs for everyone!!!

Thanks again to my awesome railbirds-- your support these last two nights means so much to me. Wins are so much sweeter when surrounded by friends. Huge congrats to JoeSpeaker (2nd), ScottMcMillan (4th), on_thg (5th), Facty (7th) and our host TripJax (9th)on their final table finishes. Well played, everyone.

Congrats on the win. At least I can say I got knocked out by the eventual winner.

Congrats Change. Well played and thanks for joining us.

When you took me out (after C-Mitch from O-poker did the heavy lifting), I knew you were going to go far. Not because I'm so great, but because you were playing solid aggressive poker. Congratulations.

The tourney had several bounties offered by bloggers. I had 2. If you win the whole tourney, you get 2 decks of copag cards. If you bust me, you get to rename the blog for a week. You won them both. Send me an email at brodybanky@aol.com with your address so I can mail out the cards. Congratulations once again

Nice win!! Jordan seems to have put on a good tournament. I will definitely catch the next one.

Nice'n. It was a blast being at your table, even tho I went out 59th (first tourney evah) I watched the wild final table to the end! Congrats!

Good times and good game. Congrats on your nice win in the 1st DADI

I never got a leg-up when it was down to just us two. Kept me scrambling.

Thanks for the mention, which makes it seem like I actually got far enough to have 10K chips to lose. Unless I was drunker than I thought (not out of the realm of possibility), someone else must have been victimized by your 66. I don't think I ever got much above the starting chip stack before Scott busted me out in 36th when I pushed for my last 800 or so with KJ.

Congratulations anyway! If I did lose that hand, I'm pissed though.