I've never been an overly Christmassy person. I put up a tree, but that's where the decorating starts and ends. Like any kid I enjoyed getting presents (especially the lottery tickets my mom puts in my stocking to this day) but hated going to church and the foursome of my parents, Mandy and I was usually rounded out by my grandmother, the odd relative, and a couple of my mother's single friends who would spend the holiday at our house. As years went by people passed away, people moved away, people had all sorts of drama, and gradually Christmas dinner was reduced back to that core quartet. Me, Mandy, Mom, and Dad.
I'm 33 and Mandy is 30. The other cousins in our generation are 32, 28, 26 and 25. None of the six of us are married (although 3 are happily living in long-term sin) or have children. And besides the point, Mandy and I are the only ones living in California, with the rest scattered to points east. Although my relationship with Pauly has outlasted many of my friends' marriages, it is decidedly not a marriage and when Christmas comes he makes the journey back to his mother's apartment in the Bronx while I drive four miles down Olympic Boulevard to engage in a strange re-creation of the nuclear family dynamic I grew up in. I miss him of course, but understand that family obligations go both ways. Anyhow, I get to join him in New York for New Year's, which in my mind is the far superior holiday, especially when Phish shows are involved.
This all leads me to my hypothesis that the anxiety I've experienced around the holidays over the last few years is rooted in discomfort with having to step back into that daughter role without any buffers. Don't get me wrong; my family isn't evil. They're actually really nice people and my sister is one of the kindest, gentlest souls you'll ever meet. And on Christmas Day I'm honestly focused on what is usually one of my best culinary efforts of the year. It's just that if you're married with kids, Christmas takes on a whole different tone. Santa and toys and wide-eyed joy. If you're a mid-thirties adult who has never, ever spent Christmas anywhere else than your parents' living room, it makes you wonder if you could ever do something so bold as to take a roadtrip or go to Hawaii one year without completely breaking their hearts.
As many times as they tell me they're fine with it, I know I'm already breaking their hearts by choosing not to do the traditional marriage and kids thing. So to make up for it, I keep playing the role of their kid, waking up in their house to open presents from "Santa." I'm serious. I'm 33 years old and my mother still puts a few things from Santa under the tree so Mandy and I have something to open on Christmas morning (our regularly scheduled family present-opening happens on Christmas Eve due to a German tradition passed down from my grandparents. Mandy typically spends the night at the house rather than do a roundtrip to the valley. With me it's about a coinflip whether or not I'm too smashed to drive home by the end of the night). The ritual is incredibly sweet and my mother has a big heart. It's just, you know, a little weird.
Nevertheless, I will spend Christmas Eve and Day at Mom & Dad's. They will be sad when I decline to accompany them to Mass (not a new thing), and rapturous when dinner goes on the plate. I have a budget of $100 and a trip to Whole Foods to make right now. I need beef, crabmeat, prosciutto, mushrooms, figs, and a whole lot of bacon. I am dying just thinking about the sauce. I really hope Mandy bought wine. So much so, that I just interrupted this post to text her a reminder.
Hopefully I have my shit together enough to post some food photos this weekend. Even though he's 3,000 miles away and will not be consuming this meal I can still hear Pauly saying "less vegetables!" and "Figs? Not eating that."
To you and yours, whatever year-end holiday you celebrate, both Disco Santa and I hope it is happy and merry. 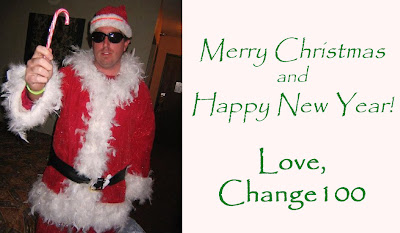 Wishing a Happy Holiday and an awesome New Year's to you and Pauly! I look forwards to your posts and always enjoy them...