Over the last four years I've asked the question in tournament rooms around the globe more times than you can count.
"So how did you win your seat?"
I've met guys that turned a few hundred frequent player points into a trip to the World Series of Poker. A young Brazilian woman who parlayed a satellite entry into more than $50,000 on the LAPT, enabling her to take far better care of her family than she did on her $8/hr job. 18 year-olds who shipped more than 100 WSOP Main Event seats three years before they were legally allowed to play. I always admired their chutzpah, their tenacity, their ability to perform capital miracles as they turned virtual water into wine. But I was firmly rooted in practicality. Earning a paycheck. Chipping away at those credit card bills that hung off my shoulders like sandbags. Such follies were admirable, but not for me.
Although the underemployment I've experienced for the last three months has certainly had a few ill effects on my psyche, it has yielded two positive byproducts-- I've turned out more screenplay pages in the last two months than I did probably in all of 2009 and 2010 and I've actually built myself a workable poker bankroll. For the former I owe a lot to regular kicks in the ass from Pauly and for the latter, I have to give due credit to CardRunners. Taking the time to watch just a few videos a week really took my game out of the muck and went a long way toward helping me ship this: 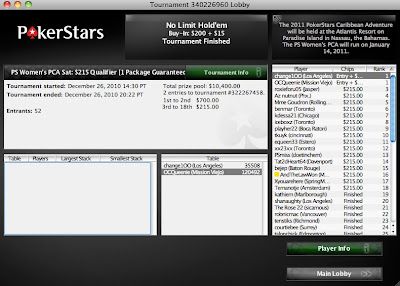 Sidelined from the WPBT festivities a few weeks ago with a back sprain, I got the idea to play for a PCA Ladies' Event seat while crocked to the gills on generic vicodin. I won my way into the $215 satellite via an $11 rebuy MTT and ended up busting out in 13th place out of forty-something players. I couldn't tell you a hand I played but damn, what a soft field. I decided to make another go of it this weekend but it took a few tries to win that $215 buy-in. I finished 3rd, 4th, 5th, and 6th (cash each time but no ticket!) in four different $2.20 rebuys before locking up a ticket in the penultimate $11R turbo sat Sunday morning. All that satellite grinding ended up having a +EV effect, however. A lot of the same crowd played those Round 1 sats and many women I'd played with in them ended up in the $215 on Sunday afternoon, so my HUD stats were overflowing on several players at my table.

The most difficult adjustment for me to make was finding ways to combat all the calling stations. There was more pre-flop limping that I was used to, and a good percentage of the time those limpers would call isolation raises, resulting in a lot of bloated pots pre-flop. In this situation, raising the limpers worked great for straight-up value, but it wasn't a move that would get anyone to fold. Neither did three-betting, except in the very late stages of the satellite. Consequently, I ended up playing much tighter than I ordinarily would. My hands held when I got it in good (QQ vs. 99, AK vs. AJ, AQ vs. A6), I won two key flips at the final table, and made one massive suckout (TT four-flushing against KK and 66) to end up chipleader with four players remaining and two packages up for grabs.

With the blinds up to 600/1,200, I had 80,000, and my three opponents had 33k, 32k and 10k respectively. I couldn't exactly fold to a seat, but the pressure came off a bit and I let the smaller stacks cannibalize each other for a while. However, I ended up doubling the short stack when her fives held against my [Qc][Tc] in a blind vs. blind hand. Now two of us had about 53k apiece and the other two both hovered around 20k.

The other big stack, OCQueenie, took out one of the short stacks when her AJ flopped an ace against pocket deuces. She was back up to 80k, I had blinded down to about 40k, and the other short stack had chipped up to 30k. I was starting to get concerned again, but thankfully the two of them took care of the final hand for me. OCQueenie's pocket tens held up against roxieforu05's pocket threes and the "Congratulations" message flickered onscreen.

My hands flew to my face. Was this really happening? Stuff like this doesn't happen to me in poker. I'm more likely to be on the receiving end of some devastating bubble. And devastating this bubble was. At 52 players, the prize pool was only $40 short of awarding one more package, making roxieforu05's third-place finish even more heartbreaking.

I dialed Pauly within 5 seconds of winning, my hands shaking so hard the phone tapped against my beaded earrings as I held it up. The only thing that would have made this win sweeter would have been if he was here with me. I let him know how deep I'd made it when we were down to five players and he was there on the rail for the big finish.

This is the largest amount I've won playing poker in some time. I almost forgot how good a big win feels, it had been so long. Although by the third or fourth go the satellites had become somewhat of a masochistic exercise, I kept plugging away because I felt I had an edge on the field. That, and even with all my time in the poker industry, I'd never experienced the Bahamas in January.

It took several bowls of Blackberry Kush and two double Baileys on the rocks to get me to stop shaking. For so long I've been writing about people who win their way in to these events, scribbling things like "Seat via $33 rebuy" in a notebook before scurrying back to my laptop to report a hand. Finally, I'm one of them. It took a few tries, but dare I say that win or lose at Atlantis, it was worth the grind to prove I could do it.
Posted by change100 at 10:28 AM

That is too cool!

No resting on laurels! Ship the tournament! SHIP THE GODDAM TOURNAMENT!!

very glad CR has been helping you improve, and yay for going to the bahamas!

Very nice to have you writing again for this blog, and congrats on the win.

Proud of your run.

Very excited for you. Enjoy the trip!

Tried and tried but couldn't win my seat. I am SO glad you got one! Yeah!

I'll ship as much luckbox power your way as I can! Congrats and take it down!

SSP and I congratulate you and have full confidence you will take it down!

I'm at a loss how to understand the apparent disconnect between statement and action here. You are under no obligation to explain yourself to me or anybody else, but if you're inclined to do so, I'd be interested to read about it.

@Rakewell: Sure, those quotes could be interpreted that way, when taken out of context. This is the full paragraph from the piece in question:

"For the record, I do not play in ladies’ events. I enjoy open events far more and I’m comfortable at a poker table no matter what the gender makeup may be. As there is no physical component to the game beyond the ability to sit in a chair and stay alert for long stretches of time, there is no need for any sort of division along gender lines in poker. I wish ladies events didn’t exist and that there was never a need for them in the first place.

But here’s the thing. Ladies’ events do exist. And a lot of women enjoy them. Who am I to go and ruin their good time? The entire concept of ladies’ events is to draw more women to tournament poker and give them more confidence, not to drive them away."

So while it's true I don't usually play ladies events myself (I think my last one was at the '07 WSOP), it's not that I don't support them and I think the piece speaks to that fact quite clearly.

I elected to pursue a seat to this event because I believe it's a great value. Two friends of mine final tabled it last year and they had a blast. I'm also comfortable with the buy-in and I get the added bonus of getting to take a trip to the Bahamas with my boyfriend and spend time with a lot of friends who will be there covering the PCA. So I think it's good game selection for me, my bankroll, and my skill level.

It's always awesome when someone you know gets to step from behind the laptop and into the action.

Congrats, best of luck in the Bahamas!

(the Latin teacher at school assures me this mean kick ass!)